Where has the lost Ark of the Covenant been? 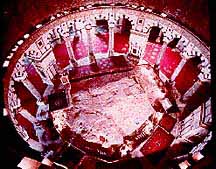 Looking down on es-Sakhra, the Rock, beneath the Muslim Dome of the Rock Shrine on the Temple Mount in Jerusalem. Archaeological architect Leen Ritmeyer believes that Solomon's Temple was built here, and that the Ark of the Covenant rested in the rectangular cut-out seen in the upper right area of the Rock.

Where is the lost Ark of the Covenant? There are numerous theories and, occasionally, even claims. Unfortunately, nothing substantial has ever been produced demonstrating the Ark's present whereabouts. Yet, while we still do not know where it is today, a scholar has now pinpointed the exact spot where it once stood.

A popular topic since release of the box office hit movie “Raiders of the Lost Ark,” scholars continue to provide new insights into the history of this ancient relic. In the January/February 1996 issue of Biblical Archaeology Review, Leen Ritmeyer marshalled textual, historical and archaeological evidence to suggest the exact spot where the Ark of the Covenant rested in the Temple in ancient Jerusalem.

Few are better qualified to make such a claim. The most recognized archaeological architect in Biblical archaeology, Ritmeyer's reconstructions of Herod's Jerusalem are widely accepted as the most authoritative. He has worked with a number of excavations in Jerusalem and written numerous articles on archaeological remains in the Holy City.

In the March/April 1992 issue of Biblical Archaeology Review, Ritmeyer presented evidence demonstrating three stages in the development of the ancient Jewish Temple Mount. He reconstructed the original Temple Mount of Solomon and the Second Temple Mount's Hasmonean addition and Herodian expansion.

Although the Temple Mount came under Israeli control in 1967, Israeli government officials returned authority to the Wakf, the Supreme Moslem Council. The Wakf, while constantly making renovations on the Mount, has been unwilling to allow any archaeological excavations. This is at least partially due to their desire to keep any evidence of an ancient Jewish Temple from being found on their holy site.

Consequently, absolute proof of Ritmeyer's proposal is not available. However, his utilization of the available historical resources and his numerous personal examinations of the site offer the most authoritative proposal of the evidence.

Now, after clarifying the historical Temple Mount, Ritmeyer turned his efforts to determining the exact location of the First and Second Temple structures on the Mount. His research confirmed the traditional view that the ancient Jewish Temple once sat directly above the famous Rock (es-Sakhra; Arabic for “rock”) beneath the Moslem shrine, the Dome of the Rock.

In addition to reconstructing the precise wall line of the Temple's Holy of Holies, Ritmeyer also believes he has identified the exact location where the Ark once sat inside the Holy of Holies, on es-Sakhra. While no one is allowed to do any direct examinations of the Rock, or even take measurements, historical data from those who have in the past, supplemented by modern photographs, provided Ritmeyer all the evidence he needed.

Precisely in the center of the Holy of Holies as laid out by Ritmeyer, is a rectangular cutout in the bedrock measuring 4 ft 4 in x 2 ft 7 in. Based on his measurement of the Biblical “cubit,” Ritmeyer suggests the Ark was exactly this size. Thus, according to Ritmeyer, the Ark once sat at the exact center of the Holy of Holies—in this very indentation on es-Sakhra beneath the Dome of the Rock!

While scholars and archaeologists are slow to agree that Ritmeyer is correct, all acknowledge he made an innovative and plausible proposal. Unfortunately, only the opportunity to excavate and do precise measurements will provide absolute confirmation of his research. Sadly, such excavations are very doubtful in the foreseeable future.

So that is where the Ark has been, but where is it now? Most scholars agree the Ark was never placed in the Second Temple (the Temple of Zerubabel and Herod). It disappeared from the Biblical story during the First Temple period and cannot be clearly traced afterward.

One of the most prominent theories today suggests the Ark is within a church in Axum, Ethiopia. While there are different theories of how and when it got there, the Ark was supposedly spirited out of the Jerusalem Temple by godly priests. Their motive was protecting it from the apostasy of Jewish leaders. (See the article by ABR Board member Milton Fisher in the Summer 1995 issue of Bible and Spade.)

Another theory suggests the Ark, along with other temple treasures, is hidden in a cave somewhere near the Dead Sea. While the Apocryphal book of 2 Maccabees seems to place this cave on the Jordan River's east bank (Biblical Mt. Nebo), many today think the Ark is presently hidden in a cave on the Jordan's West Bank. In recent decades, numerous caves in this region have been excavated, including some which contained the famous Dead Sea Scrolls. While many interesting artifacts were recovered, no evidence of the Ark has surfaced.

Probably the most popular theory of the Lost Ark's present location is a secret chamber carved deep within the rock mountain under Jerusalem's Temple Mount. The rock (es-Sakhra) beneath the Dome of the Rock is virtually the only section of the limestone mountain which can be presently observed on the surface of the Temple Mount compound.

The alleged secret chamber is generally attributed to either King Solomon, who built the First Temple, or King Josiah, one of the final kings of Judah. Purported to be carved out of bedrock and reached by a carved tunnel, it is not to be confused with the cave beneath es-Sakhra inside the Dome of the Rock, which can be entered today. The Ark's presence in this secret hiding place is widely believed by most of the Orthodox Jewish groups actively involved today in preparations for rebuilding the Third Jewish Temple.

In fact, a secret excavation by some of Israel's leading rabbis in 1981, supposedly cleared some rock-carved tunnels and chambers beneath the Temple Mount. Working in secret for some 18 months, they were convinced another 18 months would take them to the chamber with the Ark. However, when their efforts became known, the Israeli government discontinued their activities due to religious and political pressure from the Moslem/Arab world.

Is the Ark really there? No one knows. Is it even intact and recoverable? We really cannot say. Yet, recovery of the lost Ark would be the greatest archaeological discovery of all time. Its discovery would also lead to significant pressure to rebuild the Third Temple. While Moslem and Arab reaction would not make it a simple task, the Bible does say it will eventually happen. Whenever it does take place, Leen Ritmeyer has done his part to make sure it is done right!

Copyright © 1996, Associates for Biblical Research, All Rights Reserved—except as noted on attached “Usage and Copyright” page that grants ChristianAnswers.Net users generous rights for putting this page to work in their homes, personal witnessing, churches and schools.