for violence and brief language 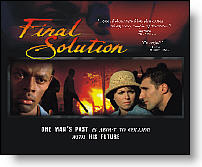 Get biblical answers on racial hot-topics.

What are the consequences of racial prejudice and false beliefs about the origin of ethnicities? Answer

“Hate was the problem… Forgiveness was the answer”

Final Solution by Cristbal Krusen is about the true story of Gerrit Wolfaardt, a reformed white supremacist who had proposed mass genocide as a solution to South Africa’s racial woes.

This is one of the finest Christian films. It’s powerfully told from the first frame to the last dramatic conclusion. With two Americans at the helms with a group of great South African cast and crew, the story is told through flashbacks from three of its main characters inside a church. What follows is the life of Gerrit Wolfaardt from childhood with his grandfather to his youthful indentification with Mein Kampf by Hitler, and then his ultimate transformation on a night that was to be one of his assignment as a killer.

It is a story about hate and reconciliation. He comes to believe that black Africans have no souls, and that it pleases God for white people to wipe them out. Aside from the film, the real Gerrit Wolfaardt returns to the black communities in South Africa and washed their feet and asked for forgiveness.

I bought the movie on DVD on an impulse from a local Christian bookstore and was riveted by the strong production value of the movie. There were no profanity but strong scenes of civil violence; fleeting strong language; racist misuse of religion depicted and debunked. No sex or nudity.

I highly recommended “Final Solution” for teen to adult. This film is a rare gem on a contemporary subject. We need a film that truly shows the truth in the Bible just as it was shown in the film—where God proclaim his stands in race issue. A wonderful film not to be missed.

Violence: Heavy | Profanity: None | Sex/Nudity: None

Also see our review of the documentary about Mr. Wolfaardt’s story: “From One Blood: The Story of Gerrit Wolfaardt”

You should expect violence because of the theme of the movie (including an attack where they burn the bad guys). Don’t let your little ones watch this movie. They wouldn’t understand and they may be scared. Explain each detail of this period of our world history to your teenagers.
My Ratings: [Good/2]

Gustavo Bastos, age 45
Positive—As an ex-Zimbabwean, I, too, am familiar with Gerrit’s comments on the variety of Truth. This movie sensitively (and accurately) approaches both black and white views in South Africa—I would recommend it to anyone with a heart for reconciliation.
My Ratings: [Excellent!/5]

Karen Veary
Positive—In a word, incredible! This movie was well written; the acting was great as was the cinematography! It’s just an awesome movie that will make you think, cry and finally stand up and applaud. Buy it today.
My Ratings: [Better than Average/5]

Dan Arthur, age 34
Negative
Negative—The movie will leave you with the idea that reconciliation is the only way to be able to embrace the future. And I believe that is true. But it doesn’t tell about the way to reconciliation. The only way is Jesus Christ. It is even a very dangerous film to watch, because it is just another propaganda film which preaches a unity without Jesus Christ. And that’s is the unity of the antichrist. Only horizontal, not vertical. Brings the unsaved people even further from the truth of God’s Word, that we are born sinners and need forgiveness of sins, and closer to hell.
My Ratings: [Excellent!/5]