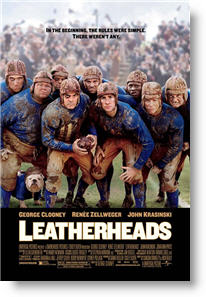 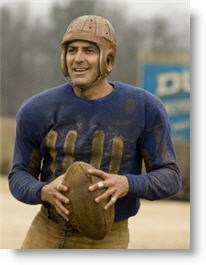 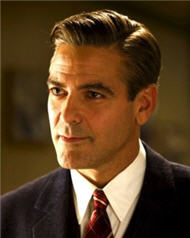 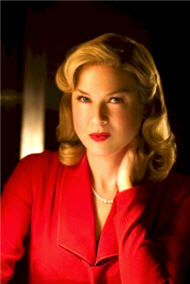 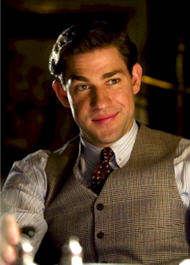 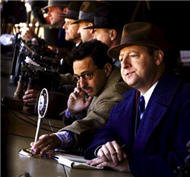 “In the beginning the rules were simple. There weren't any.”

Set in the Roaring Twenties, Leatherheads is a throwback to classic romantic comedies. Rapid-fire dialogue, George Clooney’s charisma and the comedic timing of Renée Zellweger blend to create a funny and entertaining film. Clooney produces, directs and stars in the film. His turn as DODGE CONNOLLY, the captain of the Duluth Bulldogs is full of charm and smarm.

With professional football about to become extinct in its infancy DODGE makes a play to save the league and save his own hide from certain starvation by convincing CARTER (THE BULLET) RUTHERFORD to leave Princeton and play for the Bulldogs for a large salary and percentage of the ticket sales. CARTER’s presence brings thousands of fans, commercial endorsements and scandal. Apparently CARTER’s stint in the war was not as heroic as reported. LEXIE LITTLETON (Zellweger), an ambitious spitfire female reporter from the Chicago Tribune, is determined to uncover the truth.

CARTER and DODGE become teammates on the field but opponents on the sidelines as they both vie for LEXIE’s affections.

Clooney has often been called the Cary Grant of this generation and Leatherheads affirms that claim all the more. Zellweger is a perfect fit for her role, which will draw comparisons to Rosalind Russell’s portrayal of Hildy Johnson, another quick-witted female reporter, in HIS GIRL FRIDAY. Clooney and Zellweger don’t smolder on screen as love interests but they do display a comfort and ease with one another that matches the tone of the film.

Though the dialogue is quick, the film moves at a moderate pace, but that is part of the film’s appeal. Everything wasn’t frenetic, frenzied and fast but rather a mid-tempo with fast breaks strategically placed. Even the pacing of the fight scenes was presented comically.

For example, DODGE got in a confrontation with a soldier in a speakeasy. The soldier called him a grandpa. For a moment, DODGE and all the action paused for a few seconds—no dialogue, just reaction time. Then, with a quick cut, the film jumps to everyone fighting in a full bar brawl. In the middle of the fight, DODGE realizes he knows one of the soldiers he was fighting with and they begin talking calmly. The soldier agrees to cooperate with another of DODGE’s schemes while everyone else continues to fight. Even though there are plenty of fight scenes and bottles broken over people’s heads, no blood is ever shown.

Lexie says, “It’s 1925, there are no rules.” What rules did exist at the time were broken. Selling alcohol was forbidden but most of the characters, including a young boy, went to a speakeasies for alcohol, gambling and questionable liaisons with the opposite sex. And DODGE even took a drink of whisky rather than water during a break in a football game.

DODGE specializes in breaking the rules both on and off the field. So when professional football gets a commissioner who enforces rules of play, DODGE lives up to his name to avoid them. The Bible says in 2 Timothy 2:5 that “an athlete who refuses to play by the rules will never get anywhere.

Often, we are tempted to cover up the truth like CARTER to save ourselves or someone else of embarrassment or legal woes. But the Bible says in Proverbs 28:18 (God’s Word),

“Whoever covers over his sins does not prosper. Whoever confesses and abandons them receives compassion.”

Positive
Positive—I found this movie to be a classic representation of the 20’s genera. George Clooney played his character well and besides from “GD” being thrown out there a few times it was a great movie. One that I feel will be a must have classic football/20's genera movie. John Krasinski played his part extremely well and brought back the skill and talent someone would expect from him. RenÃ©e Zellweger typifies the classic 1920’s reporter with her red lip stick and truck load of sass mixed with eloquent beauty. Leatherheads is a smart comedy with old puns and classic jokes thrown in for a great movie experience.
My Ratings: Moral rating: Better than Average / Moviemaking quality: 5

Devin, age 22
Positive—This is a fun movie. It is an interesting period piece set in the 1920s about the early years of pro football. The details from this era are well constructed, in settings and modes of transportation and clothing, so I felt not only entertained, but somewhat informed about this time in American history. There is enough comedy and romance to make this a light-hearted film. It is, of course, very wordly, in true Hollywood fashion, with quite a bit of alcohol consumption and some use of the Lord's name in vain, with a bit of mockery of those who object to such use. It is a George Clooney film—well-done and well-acted, and really quite engaging. I enjoyed it and recommend it for mature Christians.
My Ratings: Moral rating: Average / Moviemaking quality: 4

Halyna Barannik, age 62
Positive—The movie is not offensive toward Christian views. There is a good plot and the actors played the roles really well. The movie is about the beginning of professional football. There is brief swearing by John Krasinski, but it's not worth missing the movie overall.
My Ratings: Moral rating: Better than Average / Moviemaking quality: 4½

Jordan Smieja, age 15
Positive—While Football is a violent sport, “Leatherheads” shows how you can settle your grudge by words and not fists. As an American who lives in Boca Raton,Florida, as well as the nation of Singapore, I have seen both extremes of fighting. The only bad part of the movie is the bar fight which remind me of the first UM-FIU football game.
My Ratings: Moral rating: Good / Moviemaking quality: 5

Evan Land, age 28
Positive—It's a sparkler of a movie that becomes a larger than life rocket before your eyes! As one of George Clooney’s first limelit roles as both actor and director for his film “Leatherheads,” I have to give it high appraisals.

Set during the late twenties, Dodge Connolly, although mischievous as a rule and rule breaker on the field, is a man with the good heart and dream of making football the prime American sport that we know it to be. Unfortunately, the dream'll stop running to a dead halt if he can't come up with enough financial kick to keep it, and his troupe of lower class working men, thriving in the American way of life.

Enter the war hero, American icon, and football prodigy extraordinaire: Carter Rutherford! At no better time can the undergraduate appear in Connolly's life, if only for the right price will he, and in particular his public relations manager, sign up for the less than likely chance to resurrect the game of football.

And last, but certainly not to be mentioned as least of all, is our dear Lexie Littleton, a reporter whose sweet appearances are not to underestimate her sharp tongue and sixth senses from tingling when there’s a story to be found. As it so happens to be when her boss requests her to go on a “friendly” mission to pursue Connolly and Carter to discover the truth beneath the headlines speaking Carter “Bullet” Rutherford’s name.

I had my uncertainties about this film, considering how “screwball comedies” aren’t exactly the everyday sight at our theaters. It’s become a near extinct species of directing and a difficult genre to contend with other more dominant styles of movie making of our time, such as “Adventure”, “Animated”, or “Science Fiction”. There was the rating to consider, too, because in our day and time, PG-13 might as well mean code for rated R. And thirdly, there was the question of “What will the story leave with me? What will I remember best about it?”

While the PG-13 is to be regarded due to a moderate amount of obscene language (You have an imagination. You can probably guess with a George Clooney film—Remember “O Brother, Where Art Thou?”. Not as bad as that, but it isn't really necessary), I’m glad to say that my experience was more than optimistic and went far beyond my expectations on what George Clooney can do as a director. Save for the language, it was a near bull’s-eye on believable comedy in both the dialogue and physical performances that pertain to the 30’s, 40’s, and 50’s films of that genre. It does not leave you wanting more from the story. It’s well done and should satisfy even the most hardboiled critic in Hollywood. The music is not to be missed either, as it’s written by the musical artist Randy Newman!

Summed up, it was the breath of fresh air amidst the stale pungency of garbage, with the exclusion of a few films I've seen, that still thrives in our theaters… You won't be disappointed.
My Ratings: Moral rating: Excellent! / Moviemaking quality: 5

Chris Hewitt, St. Paul Pioneer Press
…Funny and sweet… Except for a few thematic elements and a random tame curse word, it could have—and maybe should have—been made between 1935 and 1945 instead of today. …

Kirk Honeycutt, The Hollywood Reporter
…The movie gets lots of things right, yet fumbles key facets so badly that you simply can’t christen it the gridiron version of His Girl Friday. …