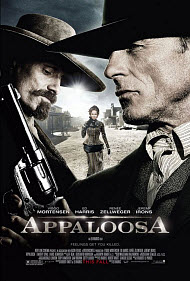 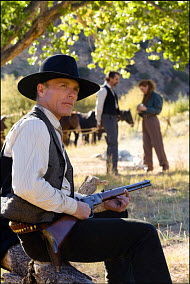 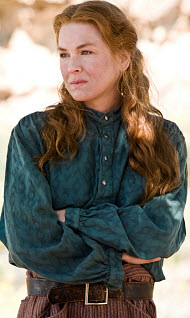 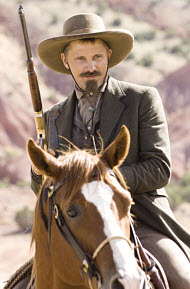 the sacrifice and selflessness of a true friend

story of Hosea in the Bible

horses in the Bible

What ever happened to the Classic Western film genre? Classic Westerns that used to be a dime a dozen in decades past have become scant over the last 25 years or so. With the exception of “Unforgiven”, “Tombstone”, and last year’s “3:10 to Yuma”, Western fans haven’t had much to be excited about, and they’ve had to revert back to the old adage, “they don’t make them like they used to.” If nothing else, “Appaloosa” is a Western that is without a doubt made in the vein of “like they used to.”

The film, based on the novel with the same title, is a story of two lawmen, Virgil Cole (Ed Harris) and Everett Hitch (Viggo Mortensen), who seek to restore order in the town of Appaloosa, New Mexico, which has been taken over by the villainous Randall Bragg (Jeremy Irons) and his cronies. A power struggle ensues between the two sides, and the arrival of the beautiful, mysterious Ally French (Renée Zellweger) creates a love interest for Marshall Cole.

Directed by the lead, Harris, “Appaloosa” is shot at a somewhat meandering pace with plenty of wide pan shots featuring horse riding, sunsets, and even a tumbleweed or two. It’s clear, however, that Ed Harris has done his homework and his attention to detail is uncanny.

There are two elements that elevate the film from mediocre to a solid entry into the fading genre. First of all the cast is outstanding. Harris and Mortensen have a natural chemistry that makes you really feel like they’ve been lawmen together for years and years. Jeremy Irons, who already is blessed with a classic “bad guy” voice (Scar from “The Lion King” anyone?), fits in perfectly as the antagonist. Secondly, below the surface level plot issues are some deeper psychological ones, highlighted by the strong friendship of the two leads as well as an interesting view on love that reveals itself late in the film.

While I enjoyed the film, I don’t know if it will do well as a cross over film to those who aren’t a fan of westerns. It plays by the book and moves relatively slowly. And while there is some great humor in the film, it’s subtle and probably resonates more if you’re already invested in the story.

“Appaloosa” earns its ‘R’ rating, but is without a doubt a restrained ‘R’ in today’s era of film. The profanity is kept to a minimum, with only a few occurrences of profanity throughout the film. The violence is what you would probably expect, with a view gory scenes but nothing gratuitous or over the top. As far as sexual content goes, sex is implied several different times but never seen. There is a brief shot of a man and woman naked in a creek, as they are seen from behind. Also, the women in the film occasionally appear in revealing clothing, including one instance where a top appears to be somewhat sheer.

The good news is that the redemptive qualities of the film heavily outweigh the objectionable content. Clear lines are drawn between good and evil. Also, the friendship between the two leads is an inspiring one that showcases the sacrifice and selflessness of a true friend. There is one other relationship in the film that is of a highly redemptive nature. I won’t spoil it for you, but the example of unconditional love shown in the film is strikingly similar to Christ’s love for us, as documented by the story of Hosea.

And in the end, that’s all you can ask for in a secular film. You can’t expect perfection, but you can expect redemptive qualities that give us the opportunity to make the connection between virtues shown on screen and biblical virtues that we can practice in our everyday lives.

Positive
Positive—A Hollywood movie that DOES NOT take the Lord’s name in vain is worth at least careful consideration. This movie had some distasteful things (calling a woman a whore, a “loose woman,” etc), but nothing that directly insults God (such as other gods, sorcery, etc.). Certainly, there is sin, but aren’t we all sinners? Concentrating solely on a narrow definition of sin (such as using the F-word) while ignoring the first four commandments, seems to be the bigger mistake.
My Ratings: Moral rating: Better than Average / Moviemaking quality: 3½

Negative
Negative—…We were extremely disappointed, and after waiting for the movie to improve, we finally walked out about 20 minutes before the end. This was absolutely not an “average” moral rating, but extremely offensive with the “F” word used at least twice, the derogatory description of loose women, nudity, and the complete lack of morality in the characters. Because they were “good friends” did not give the movie any redeeming quality, according to biblical standards, or even by “secular” movie-making standards. It was very slow and predictable. We risked the R rating, and chose to see it based on your recommendation, assuming it would be in the standard of “The Patriot” or even “Open Range,” which definitely was an outstanding western with an obvious redeeming vein throughout. …
My Ratings: Moral rating: Very Offensive / Moviemaking quality: 2½

Patricia Dowling, age 44
Negative—…There is too much swearing, especially the uses of the f-word, it is very heavy in sexual suggestiveness and sexual agressiveness that is overly unabashed. The cinematography is very good in contrast, Ed Harris and Vigo Moretensen giving great performances, however, Renée Zellweger is underwhelming compared to her usual level of ability. You may want to consider what Paul tells us (Ephesians 5:12) that is, not to even mention the evil deeds done in secret by those who don’t follow Christ. So why would you go see it? v11, it says to expose those deeds. I stayed in order to be able to write this and give an alternate viewpoint. It is foolish to say there were elements of forgiveness portrayed and overlook the heavy thematic use of lust throughout this film, that is pure relativism.
My Ratings: Moral rating: Offensive / Moviemaking quality: 4

Bob Maclean, age 59
Comments from young people
Positive—I used to watch westerns a lot with my cousins when I was younger, but I grew tired of them. They all seemed the same. But then came an awesome film called “3:10 to Yuma.” Wow that movie was good. “Appaloosa” was just as good, if not better. The characters were real, the cinematography engaging and the action sparse--though it doesn’t negatively affect the film. The script felt real, the people real, it all felt pretty real.

The acting is amazing on all parts I might add. The action was low key in blood, and there were only three or four uses of the f-word, a very rare treat for today’s films. I want to congradulate director/actor Ed Harris. Bravo! If you’re looking for a good western, made like they used to be, I highly recommend this film. (Except for some suggestive content, the film is relatively clean). Yeeha!!!
My Ratings: Moral rating: Average / Moviemaking quality: 4½

Ben Badger, age 17 (USA)
Movie Critics
…a better than average western, but it ends with a bit of a whisper rather than a bang and has some strong negative content…

Movieguide
…Appaloosa’s greatest appeal is as a buddy picture. Harris and Mortensen seem like Butch Cassidy and his pal the Sundance Kid, fused with a good-natured, long-married couple. They understand each other without speaking…

Rafer Guzmán, Newsday
…Ed Harris… directs the old-school Western ‘Appaloosa’ in a refreshingly straightforward style. … Beautifully photographed by Dean Semler, ‘Appaloosa’ is the best Western since ‘Open Range’ (2003) and shows there’s still life in this most unfashionable of genres.

Lou Lumenick, New York Post
…Hopalong hokum… ‘Appaloosa’ wobbles and wanders, promising to take a fresh look at those old myths, only to lapse back into weary convention. …

Rick Groen, Globe and Mail
…Mr. Harris… leavens the atmosphere of costumed rigidity and somber stoicism with sly, relaxed humor. There is no shortage of killing — …but “Appaloosa” works best as a cunning, understated sex comedy. …