How do we know the Bible is true? 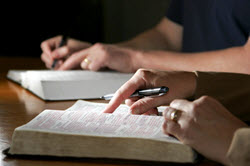 There have been hundreds of books written on the subject of the evidences of the divine inspiration of the Bible, and these evidences are many and varied. Most people today, unfortunately, have not read any of these books. In fact, few have even read the Bible itself! Thus, many people tend to go along with the popular delusion that the Bible is full of mistakes and is no longer relevant to our modern world.

Nevertheless the Bible writers claimed repeatedly that they were transmitting the very Word of God, infallible and authoritative in the highest degree. This is an amazing thing for any writer to say, and if the forty or so men who wrote the Scriptures were wrong in these claims, then they must have been lying, or insane, or both.

But, on the other hand, if the greatest and most influential book of the ages, containing the most beautiful literature and the most perfect moral code ever devised, was written by deceiving fanatics, then what hope is there for ever finding meaning and purpose in this world?

If one will seriously investigate these Biblical evidences, he will find that their claims of divine inspiration (stated over 3,000 times, in various ways) were amply justified.

The remarkable evidence of fulfilled prophecy is just one case in point. Hundreds of Bible prophecies have been fulfilled, specifically and meticulously, often long after the prophetic writer had passed away.

For example, Daniel the prophet predicted in about 538 BC (Daniel 9:24-27) that Christ would come as Israel’s promised Savior and Prince 483 years after the Persian emperor would give the Jews authority to rebuild Jerusalem, which was then in ruins. This was clearly and definitely fulfilled, hundreds of years later.

There are extensive prophecies dealing with individual nations and cities and with the course of history in general, all of which have been literally fulfilled. More than 300 prophecies were fulfilled by Christ Himself at His first coming. Other prophecies deal with the spread of Christianity, as well as various false religions, and many other subjects.

There is no other book, ancient or modern, like this. The vague, and usually erroneous, prophecies of people like Jeanne Dixon, Nostradamus, Edgar Cayce, and others like them are not in the same category at all, and neither are other religious books such as the Koran, the Confucian Analects, and similar religious writings. Only the Bible manifests this remarkable prophetic evidence, and it does so on such a tremendous scale as to render completely absurd any explanation other than divine revelation.

The historical accuracy of the Scriptures is likewise in a class by itself, far superior to the written records of Egypt, Assyria, and other early nations. Archeological confirmations of the Biblical record have been almost innumerable in the last century. Dr. Nelson Glueck, probably the greatest modern authority on Israeli archeology, has said:

“No archeological discovery has ever controverted a Biblical reference. Scores of archeological findings have been made which confirm in clear outline or in exact detail historical statements in the Bible. And, by the same token, proper evaluation of Biblical descriptions has often led to amazing discoveries.”

Another striking evidence of divine inspiration is found in the fact that many of the principles of modern science were recorded as facts of nature in the Bible long before scientist confirmed them experimentally. A sampling of these would include:

These are not stated in the technical jargon of modern science, of course, but in terms of the basic world of man’s everyday experience; nevertheless, they are completely in accord with the most modern scientific facts.

It is significant also that no real mistake has ever been demonstrated in the Bible—in science, in history, or in any other subject. Many have been claimed, of course, but conservative Bible scholars have always been able to work out reasonable solutions to all such problems.

The remarkable structure of the Bible should also be stressed. Although it is a collection of 66 books, written by 40 or more different men over a period of 2,000 years, it is clearly one Book, with perfect unity and consistency throughout.

The individual writers, at the time of writing, had no idea that their message was eventually to be incorporated into such a Book, but each nevertheless fits perfectly into place and serves its own unique purpose as a component of the whole. Anyone who diligently studies the Bible will continually find remarkable structural and mathematical patterns woven throughout its fabric, with an intricacy and symmetry incapable of explanation by chance or collusion.

The one consistent theme of the Bible, developing in grandeur from Genesis to Revelation, is God’s great work in the creation and redemption of all things, through His only Son, the Lord Jesus Christ.

The Bible is unique also in terms of its effect on individual men and on the history of nations. It is the all-time best seller, appealing both to hearts and minds, beloved by at least some in every race or nation or tribe to which it has gone, rich or poor, scholar or simple, king or commoner, men of literally every background and walk of life. No other book has ever held such universal appeal nor produced such lasting effects.

Learn about the Bible

One final evidence that the Bible is true is found in the testimony of those who have believed it. Multitudes of people, past and present, have found from personal experience that its promises are true, its counsel is sound, its commands and restrictions are wise, and its wonderful message of salvation meets every need for both time and eternity.

Authors: Henry Morris and Martin Clark, as adapted from their book The Bible Has the Answer, published by Master Books, 1987. Supplied by Films for Christ with permission from Master Books.

Related information on this topic