What are the…
Messianic prophecies

Biblical prophecy specialists Peter and Paul LaLonde have noted that:

The Old Testament includes about 60 different prophecies, with more than 300 references, of the coming of the Messiah. It was through the fulfillment of these prophecies that Israel was told she would be able to recognize the true Messiah when He came. The 4 gospels record several times when Jesus said that He was fulfilling a prophecy of the Old Testament. Luke 24:27 records, for example,

“And beginning at Moses and all the prophets, he expounded unto them in all the scriptures the things concerning himself.”

“And he said unto them, These are the words which I spake unto you, while I was yet with you, that all things must be fulfilled, which were written in the law of Moses, and the prophets and the psalms, concerning me.”

“For if you believed Moses, you would believe Me; for he wrote about Me” (John 5:46 NKJV).

Likewise, Christ’s closest companions, His disciples confirmed and taught that He fulfilled all Old Testament prophecy about the Messiah (e.g., Acts 3:18; 17:2-3; 1 Corinthians 15:3-4). 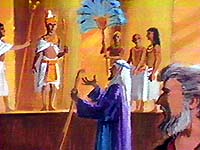 Click to learn the story of Moses in our God’s Story section.