for strong violence, language, some sexuality and brief drug use. 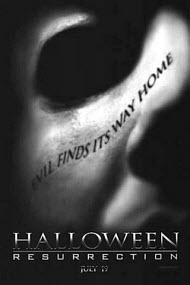 When a studio purposefully releases a film at the wrong time of the year so that it can do better at the box office, we should all stay away. Especially in the case of Halloween: Resurrection, a poorly constructed bloodbath.

“Halloween 8” begins with a scene of flashbacks and backstory, basically assuming that the audience is either too dumb or too young to remember anything about Michael Myers. From there on it goes into its usual plot. Michael is alive and he is killing people. The only interesting twist is that he is killing an online entertainment team that happens to be staying at his childhood home on Halloween. The twist being that audiences all over are watching as Michael brutally kills each college age beautiful person, but none of them believe it is real (thanks to the “Blair Witch” no doubt.)

Though acting isn’t terrible in this film, the script most definitely is. There are no false pretenses here. People are going to go see Halloween: Resurrection because they like to be scared and they like the violence. For anyone who does not like the violence, please stay away from this film. It isn’t worth your time and the violence is extremely graphic. Language also seems a bit extreme but nothing you wouldn’t expect from a film like this.

I must admit there are a few good scares and creepy shots in this film but the bad outweighs the good.

…Its premise is smart, but the execution is pretty weary…

Jennie Punter, The Globe and Mail
Comments from young people
Neutral—This movie was actually better than I expected it to be—I only saw it b/c it was the only remotely interesting movie at a new “Cinema Grill” place. The movie is actually rather timely, since it combines Michael Myers with “reality tv,” an innovative concept. The way that Jamie Lee Curtis’s character/Michael Myers relationship comes to its conclusion is also clever and represents a break with the earlier films. The movie contains cursing, violence, and some nudity, as well as some heroic behavior on the part of the Busta Rhymes (I think) character, who fights Myers to save others.
My Ratings: [Average / 3½]

Matt Quinn, age 17
Neutral—“Halloween: Resurrection” is very, very scary and has non-stop horror and violence. But remember the movie warns that there is strong violence, There is a lot of cussing, but not as much as I thought. And a love scene with brief nudity. If you’re a fan of the Halloween series then see this one. A lot fo this stuff in the movie is very offensive. But I handled it. I recommend it for mature teens. I don’t like the comments Jamie made “See you in hell.”
My Ratings: [Average / 5]

David Jemison, age 16
Positive—This movie was the best out of the series. excellent acting, plot, character development… even saved itself from the question: “how was Michael gonna come back this time?” I think every true horror fan should see this.
My Ratings: [Very Offensive / 5]