for strong sensuality, and for language 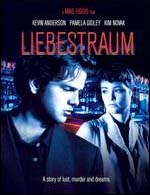 Although it’s been compared to Kenneth Branagh’s work “Dead Again” which was released the same year (both films have a theme of two related pairs of lovers a generation apart, plus an emphasis on “fate”), this Mike Figgis vehicle is actually in a class by itself. That’s not necessarily a good thing.

We open on a 1950s night scene of a couple making love in a deserted department store (namely, the Ralston building) while a 78 RPM recording of Liebestraum (“Dream of Love”) provides the background. Oops, the store isn’t quite deserted; a man enters, and apparently shoots and kills the lovers.

Forward to present day. Architectural critic Nick Kaminsky (Kevin Anderson) comes to a small town to meet his ailing birth mother (Kim Novak) for the first and last time. While there, he runs into (and saves the life of) his old college buddy, Paul Kessler (Bill Pullman). Paul is there because he’s been hired by the Ralston family to tear down the old department store, which has been closed ever since the murders. Nick is fascinated with the store’s cast-iron design and is appalled at this waste of a beautiful landmark; Paul’s wife Jane (Pamela Gidley), a photographer, feels the same way. As time passes, Nick and Jane find more in common than the building.

The film is an excess of form over substance. However, I’d say the accusations of a paper-thin plot are overstated. There’s an intricate structure to the storyline, and Writer/Director/Music Scorer Figgis makes the viewer work much harder than usual at putting all the pieces together.

For those who just want a thriller with excessive sex, disappointment probably awaits. Although there are several scenes of simulated sexual activity, none of them involve nudity; the participants are always clothed in at least their underwear. The only nude scene is a rear shot of a woman taking a shower. That doesn’t mean the film isn’t offensive. There’s VERY crude language (even in the mouths of Novak and of Catherine Hicks); some instances of visible fondling; and a continual atmosphere of fornication including a party hosted by Paul at which everyone seems to be on the prowl (maybe it’s something in the city water?).

A scene found only in the NR version involves Nick being taken to a hotel/brothel by a cop who offers to buy him any woman he wants. (“They’re all clean; I have them checked every month.”) The prostitutes explain their specialties (oral sex, spanking etc), and one of them touches herself and then sticks her fingers into Nick’s mouth. Small wonder that that scene got the axe in the “R” version. Problem is, Figgis made that scene crucial to understanding the “hidden” storyline. References to sexual juices and odors are a tie-together device running throughout the film (how creative); the brothel pianist (Alicia Witt) is elsewhere the girl in a dream sequence; and the prostitutes are also the nurses who care for Nick’s mother.

With the preceding information, perhaps the reader can watch the “R” version and still unravel the plot. Aside from this scene, pay close attention to Nick and Jane’s conversation in a vehicle (much of the film’s dialogue is in a semi-whispered tone) and to a number of seemingly-unimportant details. We eventually learn who Nick really is. And if Jane is who she seems to be after all the pieces are put together, then the material about odors isn’t the most offensive content.

Actually, I’m unable to decipher the entire film with certainty; I’m not even sure whether two people seen at the end of the film are supposed to be dead, or are just resting quietly. And at some point I decided that I don’t really care, since the answer has no bearing on the real world anyway. I don’t mind being stretched by a film and made to think hard; but this is a little much. Figgis is making us think hard about themes which Christians would be better off not thinking about at all. Besides the material already mentioned, the repetitive themes suggest a fatalistic or supernatural element at work, driving people helplessly on to their doom. STRANGE film.

If you want a quiet night of relaxing entertainment, this is not a logical choice. The only target audience to which I’d recommend this film strongly are those seriously studying film technique.

I must say that the acting is good all around and the cinematography excellent. Figgis did what he set out to do. Among Figgis’ other groundbreaking work is “Timecode,” in which the four quadrants of the screen display four simultaneous views of the same story, each shot in one continuous take.

The male lead, Kevin Anderson, was also noticeable in 1991 as Julia Roberts’ love interest in “Sleeping With the Enemy”. His other credits are far-reaching: he’s played John Kennedy (on stage and in “The Judith Exner Story”), Robert Kennedy (“Hoffa”) and Frank Gifford (“Monday Night Mayhem”).