for language and violence. 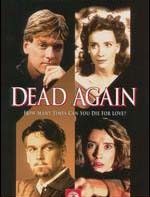 “a mystery about true love… and certain death”

As an example of Kenneth Branagh’s artistry and of creative cross-genre filmmaking, “Dead Again” stands out. But its overall effect (in addition to the effects common to most R-rated films) is the promotion of a very dangerous worldview.

Late-1940s newspaper clippings about Roman and Margaret Strauss during the opening credits blend into a prison scene of Roman about to be executed, which turns out to be the present-day nightmare of a troubled, amnesiac young woman (Branagh’s then-wife and frequent costar Emma Thompson). Good-hearted private investigator Mike Church (Branagh) tries to help the woman discover her true identity. [In the B&W 1940s scenes, Branagh and Thompson also play the Strausses.]

Through the influence of a “defrocked” psychiatrist (Robin Williams) and a hypnotist (Derek Jacobi), Church and the audience are led to believe that the woman’s problems may have originated in a past life. Williams preaches about “fate” and about the “karmic credit plan” (you meet up with the same people—either older, or themselves in a new incarnation—during successive lives; so if someone wronged you last time around, you have a chance to settle the score). This doctrine is strongly underscored by the film’s plot and presentation. Besides Branagh and Thompson, several other actors have parts in both the 1940s sequences and the present-day sequences; in some cases they’re obviously not playing the same characters, so their double use implies “group reincarnation.”

Content Warnings: The language is extreme in spots. There’s no visible sexual activity, but it’s implied that both sets of the Branagh/Thompson characters have nonmarital sex. There are some violent deaths. And the “fate/reincarnation” message permeates the story. There’s one additional point in that regard that I’d like to warn the viewer about, but cannot lest I give away a major plot twist. Branagh tricks the audience to an extent seldom seen in mainstream films. Some viewers will want to go through the movie a second time to see how they were tricked the first time. (Is Branagh dumb like a fox, or what?)

Positive Content: This is a hard one. Perhaps the anti-smoking message (something liberals and conservatives can agree on). Andy Garcia’s character is a chain-smoker in the 1940s sequences; in the 1990s sequences he’s an old man who’s dying and speaks with a throat amplifier, but still smokes cigarettes through his tracheostomy. Lest anyone think this is an exaggeration of reality, I once saw a patient in a VA hospital cafeteria who had his entire lower jaw cut away, but stuck a six-foot-long rubber tube into his tracheostomy and put a cigarette into the other end of the tube (so he could hold the cigarette at arm’s length while puffing).

I recommend this film only to adults who clearly understand that the doctrine of reincarnation is unscriptural.

Neutral
Neutral—Have to agree with the reviewer—an entertaining suspense/mystery story that is based on a very dangerous worldview. I don’t see anyone adopting a kharma/reincarnation worldview as a result of this film, but be discerning. Its messages about death are not scriptural. Don’t know whether Branagh believes in this worldview or meant this film to be just a work of fantasy. But, at any rate, a film only for the mature believers.
My Ratings: [Very Offensive / 4]