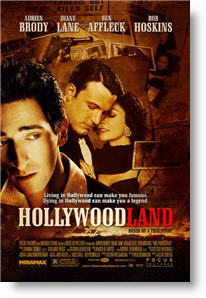 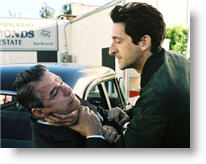 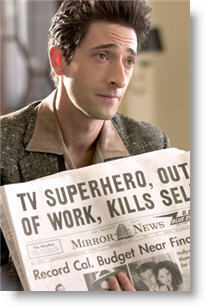 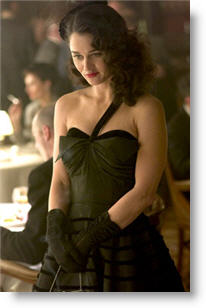 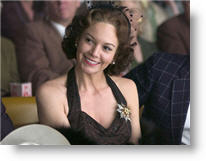 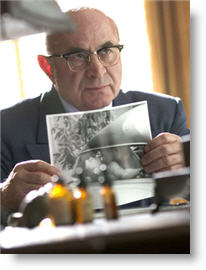 “Hollywoodland” is a movie that shows us that not everything is what it seems. We start off with a crime scene that appears to be an open and shut case. It would seem that the actor George Reeves (Ben Affleck), beloved by children everywhere for his title role in the television show “Superman”, has shot himself to death. Next we are introduced to Louis Simo, a private detective played by Adrian Brody. The first time we see him, he is zipping up his pants, and it is implied that he has just been interrupted in the act of fornication with his assistant by one of his clients.

We soon discover that money is very high on Simo’s list of priorities, as he continues to take money from this client long after he surmises that his client’s wife is not cheating on him. Always looking for more work, Simo learns that Reeves' mother has come to Hollywoodland searching for the truth, but the police are reluctant to consider foul play. So, using a mixture of deception and truth, he manages to get himself on her payroll.

From there, we see Reeves' life in flashbacks, as Simo investigates and envisions what might actually have happened to the “Man of Steel.” What we learn is that there were, in fact, people who may have wanted him dead, including the head of MGM Studios Eddie Mannix, whose wife (Diane Lane) Reeves had a not-so-discreet affair with.

We learn that Reeves was far from the role model he portrayed. Reeves thought doing a kiddie show was beneath him. The Bible says we are not to have an exaggerated opinion of our own importance (Rom. 12:3).

We also see see Simo’s personal life, which is in various stages of unraveling throughout the film. He has a shaky relationship with his son and ex-wife, but he is consistently shown trying to maintain an active role in his son’s life. But not everything is what it seems. On the surface, by Hollywood’s standards, Reeves had everything and Simo nothing. But scratch the surface, and they are not so different. Both men are shown drinking, smoking, and fornicating. (Sadly, marriage is treated very lightly by everyone portrayed.)

If anything, Simo comes out slightly ahead, because unlike Reeves, who seems to be in denial about the moral decay his own choices have led to, Simo never pretends to be anything other than a flawed human being trying to make it through the next day.

I couldn’t help but like Reeves as-portrayed-by Ben Affleck, however. There is an understated sadness that he coveys as the story hints to why he may have been despondent. I was really saddened that Reeves’ life ended the way it did. We don’t really know if Reeves took his own life, but God says He has a plan for every human life through relationship with Jesus Christ that includes the promises of hope and a future (Jer. 31:17). Suicide is never the answer. Psalm 30:5 tells us:

“Weeping may endure for a night, but joy comes in the morning”

Thankfully, every other word was not a curse word, but there were several instances where the script included profanity including the f-word, as well as some course dialogue. There was also nudity, including Reeves and Simo walking around shirtless, Reeves’ backside, a shot of Simo laying in bed with his assistant where you see all the way down to just below his navel, and one scene where a woman’s breasts are out of focus. There are also scenes where characters are engaged in premarital sex.

It is a shame, because this was a movie that had enough talent and good storytelling to stand on it’s own merit, but silly me, I forgot the telltale title informing where this movie was produced: “Hollywoodland.” My recommendation is to skip this one, unless you have have TV-Guardian to edit out the offensive material when it comes out on DVD.

Negative
Negative—I was looking forward to seeing this movie for a long time because I knew that it was based on a true story of an unsolved Hollywood mystery. I was very disappointed. Most everything about the production was poor. Much vulgarity which needn’t have been expressed flew endlessly, especially with the female characters. Perhaps Hollywood has always been nothing more than debauchery, but they could have done a better job of building some sort of protagonist with an ounce of human decency. Though Adrien Body attempted this, the poor storyline defeated his effort. The script was very poor and fragmented. Many flashbacks and possibilities of what happened were presented,, but without a cogent argument. If the writers and producers had focused on building up one particular hypothesis, it would have been a stronger approach.
My Ratings: Very Offensive / 2

Ronda, age 40
Comments from young people
Positive—Adrien Brody is officially one of the greatest, modern actors alive. He is pure talent, and lives and breathes each of his roles, as his highly detailed mannerisms show. Ben Affleck, through a serpentine career, broke through in “Hollywoodland” with his role as George Reeves, and acts with realism, love, and genuity that so many stars lack these days. Diane Lane, though playing Reeves' sickeningly attached lover, proves to be a true representative of the art of acting. Though she’s not “fun” to watch in “Hollywoodland,” no one can deny her success in breathing life into this role.

So aside from the acting, the film is very “noir-ish,” and has little-to-no music, is rather stark, and relies on beautiful cinematography to portray the storyline and message. The 50s are remarkably re-created, and makes the audience feel as if they too were witnessing the events before them.

Though the acting and filmmaking is top notch, the dialogue, not the language, made particular scenes in this movie hard to swallow. Though there were utterances of the Lord’s name in vain and F-words as well, it was the true coarseness with which several of the characters spoke that literally made me cringe. The scenes were short lived, but their impressions lasted long enough to make me remember to type them up in this mini-review. The violence was practically nonexistent, though the death-scene of George Reeves was played and reviewed multiple times (it’s not too violent anyway, and it progressively loses its shock as it gets played each time).

Overall, “Hollywoodland” is what I expected: dark, classic, memorable, and well produced and acted. It had language, some sexual situations, and some violence, but ultimately, this film had slightly more good in it than bad. I wouldn’t recommend this to those who are offended easily or detest darker, more thoughtful and dramatic films. 5/5 stars for quality. 2/5 stars for morality.
My Ratings: Very Offensive / 5