for thematic material involving violent action and a childbirth scene

Browsing through your collection of classic movies at home you may stumble upon “Oliver Twist” or the popular seasonal favorite, “A Christmas Carol”. If you think these classic adaptations are relegated to old videos collecting dust downstairs, you will be greatly surprised and delighted when you venture beyond the shelves at home and grace the doors of your local movie theater to find a fresh adaptation of another Charles Dickens’ classic novel, “Nicholas Nickleby”.

This third novel by Dickens and second film adaptation and directorial venture by Douglas McGrath (“Emma”), exposes issues of social injustice, portrays the loneliness and evils of greed, and holds in highest esteem the importance of family—even when “family” means something beyond blood relation. The values and principles so evident in other timeless Dickens’s classics are felt as uncompromisingly here in this latest production, due to be distributed nationally in January 2003.

As with the novel and 1947 film adaptation, the new “Nicholas Nickleby” begins with the passing away of Nicholas Nickleby Sr., who states in his will that his daughter, Kate (Romola Garai), his son, Nicholas Jr., and his wife be cared for by his brother, Ralph (Christopher Plummer). After a shaky reception from Uncle Ralph, 19-year-old Nicholas (Charlie Hunnam, “Abandon”) begins his struggle as the new leader of his family. He journeys through the lower echelons of London’s society, beginning with a despotic boarding school for boys, then to a local theatre troupe, and finally reuniting with his mother and sister who have been through their own turmoils. Through it all, the void of a father in this family strengthens the tie between them, while bringing in other less fortunate people into their family and losing those in it who are bound by evil. 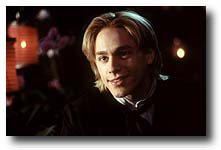 The biblical lessons to draw from this film are numerous. This is due directly to the elements Dickens included, but can also be accredited to the director of the film, who has included his own godly values into it. The chief battle in the story can be seen as good versus evil. This is specifically portrayed with the corruption of Uncle Ralph by his love of money, and the righteous, consistent good deeds of Nicholas (perhaps a parallel to St. Nicholas could be inferred between these two characters). Clearly, greed and the love of money are shown as the evil. And since we naturally cheer for the good guys, which in this case is Nicholas and his family, we are also, here, rooting against these evils. (For more on this, see our interview with the director.)

The victory for the Nickleby family is not based on their own retaliation against the evils they are oppressed by. Instead—and this is another lesson—they consistently pursue doing what is right instead of seeking revenge. There are moments when Nicholas steps in and retaliates against injustice, but it’s not vengeful. He steps in to put an end to the wrong-doing, but then walks away. The real rewards for them come not from the bad guy “getting it” in the end, but from the good deeds they have sown to help other people.

While it’s not expounded upon where Nicholas and his family base their goodness, the fact that they are godly and live by righteous standards should be an encouragement to believers. At one point, Nicholas’s sister, Kate, is threatened by Uncle Ralph, to which she responds by saying that she and her family will “trust God” to help them. Also, there are interesting moments when Nicholas is hurting or in need of help and he calls on his “father.” Actor Charlie Hunnam who played Nicholas, said in an interview that the way he chose to play these addresses to “father” were aimed toward Nicholas Nickleby Sr., who had just passed away.

However, in light of the “Christ-figure” parallels aroused by some viewers, there could be some spill-over into seeing these cries as prayers to God the Father.

The only point of contention may be during the exchange with Nicholas and his new-found love, Madeline Bray (Anne Hathaway, “The Princess Diaries”). (Parallels may also be drawn between Adam and Eve in how these two meet.) It was refreshing to hear both characters confess that they needed “saving”, but then Nicholas offers that together they could find salvation within themselves. They’re highlighting the strength and beauty of true love, but it would have been an exceptional moment if at least one of the characters admitted that they needed Christ. The analogy of Nicholas as a Christ-figure breaks down here in the story and he becomes more of an “everyman.” But, a wonderful choice could have been made at this moment to have such a great person like Nicholas acknowledge that Jesus Christ is the only way to salvation, while keeping the idea of Christ central to the story. 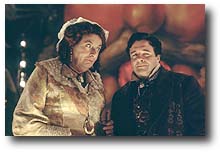 Overall, this film is an entertaining and excellent source of edification. The only uncomfortable moment may be when the grotesque Squeers (Jim Broadbent and Juliet Stevenson), who run the boarding school, kiss. But there are no sex scenes, nor is there any profanity. The wife of the theatre troupe leader is played by a man, but this choice is not intended as any sort of homosexual innuendo. It’s done purely for humor and intends to portray the extensive unattractiveness of this woman character.

The quality of the production, the acting, and, of course, the rich source they are working from provide for a very wholesome, well-spent time at the movies.

Positive—I love stories with heroes that display courage, honor, and virtue. Charles Dickens has written many profound tales illustrating the paths of good and evil. Nicholas Nickleby is one of the lesser-known. Fortunately for us, Douglas McGrath understands the worth of such stories. He has taken a complex novel and compressed it into a very stirring, heart-wrenching, and often touching film. The casting is brilliant. The costuming is lovely. The musical score fluctuates between joyous and despondent. It’s a wonderful film, and everyone in my group enjoyed it for its worth… but I feel I should remind viewers of a few facts the reviewer has glossed over in his review. There is a great degree of thematic material (including lust, gambling, child abuse, suicide, and death), along with some violent content (made all the more inhumane because it is directed toward children), and mild sexual overtones. One of Ralph Nickleby’s business associates becomes infatuated with Kate, and makes advances and inappropriate remarks to her. This makes the villain all the more disgusting for not standing up for her (and indeed, even purposefully subjecting her to such abuse), and plays a central role in the film. Not everyone will like Nicholas Nickleby, but the world would be a better place if more young men were raised with the same high standard of honor and virtue as the young hero.
My Ratings: [Good / 4½]