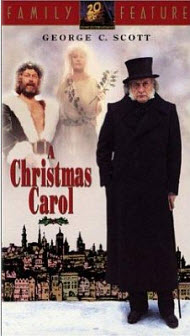 George C. Scott’s “A Christmas Carol” is an acceptable, if not compelling, rendition of Dickens’s classic tale. With the backing of Twentieth Century Fox, the film’s look (sets, costumes, makeup, props) were right on the money. However, the acting is this film simply wasn’t convincing for this viewer. The actors seemed to be reading cue cards that said “Be Angry Now” or “Be Sad Now”. There were a few sparks of emotion from Scott that seemed real, but for the most part, each actor/actress appeared to me to be simply walking through their scenes.

I also felt that George C. Scott, while able to come across as a mean, heartless person, seemed to either whisper/growl or shout. He didn’t appear to have any other motivation than to yell a lot. In fact, it seemed that almost every character in this rendition seemed more abrasive and less likable. Even the ghosts seemed more rude and snippety than they had before. I must admit, though, that the casting of Tiny Tim (and the dreadful look they gave him) was a great plus to the film.

Spiritually speaking, the film can present a bit of a quandary for the Christian viewer. Where is God in all of this? There doesn’t appear to be a need for a Savior when Jacob Marley can come back from the dead to warn us of the dangers of an unrepentant life, accompanied by three ghosts. However, if we turn this around and see it as sinful man (Scrooge) needing salvation (the change of heart that comes after the visit of the three ghosts) then suddenly we have a story of repentance that’s already woven into our “cultural subconscious”. The story of Scrooge can also show what happens to someone that gives their heart to the wrong thing (money vs. the love of God’s creation).

If you only get to see one “Christmas Carol” this year, the recent TNT retelling of “A Christmas Carol” starring Patrick Stewart is a much better choice than the George C. Scott film.

Positive
Positive—There are many who would say that the 1951 version with Alastair Sim is the best, but I would have to disagree. I think that George C. Scott is the definitive Scrooge and this production is wonderful in every respect. For the writer who found the 1951 version highly objectionable, I would like to comment on Dicken’s intent. Charles Dickens was a Christian and a wonderful writer. While it is true that there are “ghosts” or “spirits” that visit Scrooge which may not be Biblically correct, the author makes a point of acknowledging God and the true meaning behind the celebration of Christmas. Note the words of Bob Cratchit as he tells his wife about Tiny Tim. He tells her that while in church Tim didn’t mind that people saw that he was crippled and hoped that all who did would be reminded of who it was who made the lame walk and the blind see. The last “spirit” was the spirit of Christmas yet to come not the “ghost” of the future…
My Ratings: [Good / 5]

Donna Kristiansen, age 51
Neutral
Neutral—George C. Scott plays a good Scrooge in this version, he somewhat fits the character I suppose. From a Christian perspective, there is little value in this picture. That a despicable old man is frightened by spirits into a positive changing of his attitude, his demeanor, his life essentially, is certainly contrary to Christian teachings. From a cinema perspective, this version adds modern film making technology to the 1951 version of virtually the same film. It does have a rather frightening scene where one of the spirits opens his cloak to reveal two, very near death-looking, children. This scene took us by surprise and frightened all three of my children who were 11, 8 and 6 at the time. They have not watched it again. The secular movie moguls just don’t understand the significance of the birth of Christ, or for that matter the more important resurrection. Hence, I suppose if you are entertained by movies, don’t expect Christian story plots, themes or messages in any film about Christmas.
My Ratings: [Good / 4]