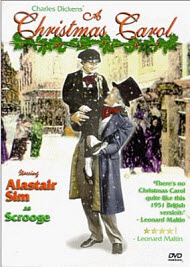 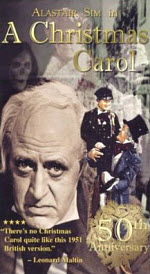 What is the TRUE meaning of Christmas? Answers for skeptics. Plus carols, games, coloring pages, reviews of Christmas movies, and more.
Movie reviews

This novel by Charles Dickens has been filmed many times; the general consensus (and I agree) is that this 1951 production is the best version.

Ebenezer Scrooge (Alastair Sim) has an extreme case of greediness and a lack of normal human feeling, partially attributable to his childhood. The ghost of his former business partner, Jacob Marley, visits him on Christmas Eve with a warning about his eventual fate, and during the night sends three other spirits to reinforce the warning.

The only drawback from a Christian standpoint is that the dead are not permitted to visit the living and give them warnings like this (Luke 16:19-31)—although there are plenty of spirit mediums who make a good living using either evil spirits or special effects magic to impersonate the dead. The best thing to do is just accept Marley’s ghost as a plot device, and think of the three spirits of Christmas as angels. Marley’s appearance, and that of the “spirit of Christmas yet to come,” may be frightening for small children.

On the positive side, this story shows how bad attitudes to life can be caused by circumstances and, if not dealt with, can continue from generation to generation. It also shows that although there may be reasons for a bad attitude, there are no excuses. Even though the “spirit of Christmas present” refers to Jesus only in an indirect way and not by name, the realistic portrayal of the eventual repentance and conversion of Scrooge is a strong witness of the transforming power of the Gospel. After I witnessed to one of my college friends, he later had the message reinforced through watching this film—it brought conviction of sin on him. If I were not forced by occasional content to rate this film as less than 4, I would rate it as more than 4.

Positive
Positive—I think the George Minter/Brian Hurst production of “Scrooge” is timeless, classic, and of great moral benefit. I thoroughly enjoy watching it every year, and find it never fails to test my commitment to the Lord, as well as my personal level of benevolence and charity. As a Christian, I don’t have a problem with the story line. To me, the implication is clear that these are dreams Ebenezer Scrooge is having. The manifestations of “ghosts and spirits” he cavorts with, are conjured by his own subconscious. I do not sense the film is attempting to promote a belief in the occult, but rather to effectively communicate the very good lesson that Dickens presents in his short story. I think the moral is clear as well as scriptural:

1 Cor. 13:1—If I speak in the tongues of men and of angels, but have not love, I am only a resounding gong or a clanging cymbal.

James 2:15-16—Suppose a brother or sister is without clothes and daily food. If one of you says to him, “Go, I wish you well; keep warm and well fed,” but does nothing about his physical needs, what good is it?

To be reminded of our Christian call to benevolence is a good thing. And I find the initial conversation Scrooge has with “the ghost” of Christmas present in his drawing room to be evangelistic in nature. The reference to Christ by “the spirit” in this scene, is deeper and more direct than many Christians are willing to be, in their workplaces. The acting is superb. Alastair Sim is the best Scrooge ever, and Michael Hordern’s portrayal of Jacob Marley is a real scene stealer. Out of five stars, I would give this film a five.
My Ratings: [5]