for language, thematic elements, drug content and some suggestive material. 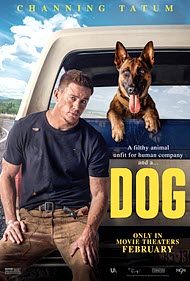 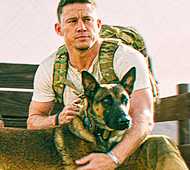 TEMPTATIONS—How can I deal with them? 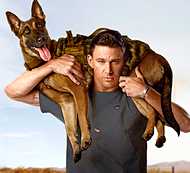 The American Kennel Club says this, “The smart, confident, and versatile Belgian Malinois is a world-class worker who forges an unbreakable bond with his human partner. To deny a Mal activity and the pleasure of your company is to deprive him of his very reasons for being. A breed hallmark is the proud carriage of the head. If you have ever seen a Mal perform an obedience routine, you know firsthand what a smart and eager breed this is. Problems set in, though, when this people-oriented dog is underemployed and neglected. Exercise, and plenty of it, preferably side by side with their adored owner, is key to Mal happiness.” 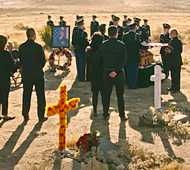 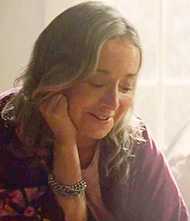 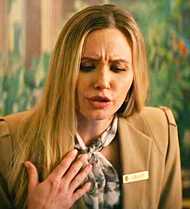 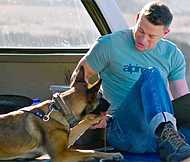 Army Ranger Jackson Briggs (Channing Tatum) is so desperate to return to active duty after a brain injury that he accepts an unwelcome task… driving a traumatized military dog to the funeral of her former handler. The outlandish misadventures which ensue are sometimes humorous, sometimes touching, and sometimes formulaic. Can a man seeking purpose find it in helping a “broken” dog?

Channing Tatum makes his directing debut (alongside Reid Carolin) while also starring in “Dog,” a movie which doesn’t exactly seem to know what it is meant to be. Is this a hilarious buddy comedy road trip? A thoughtful journey to healing after the horrors of war? A societal commentary about stereotyping and how everyone is more than they seem? “Dog” attempts to be all three at the same time, and the audience is tugged first one way, then the other. It may not be funny enough for those seeking comedy, does not have real answers for those who have been traumatized by battle, and can’t seem to pick a side on which to land in the culture war. But I suppose life is like that sometimes… not able to be fit neatly into any one category.

Tatum is sensitive in his portrayal of the deeply troubled Briggs, who seems to be seeking peace but is also desperate for action and the sense of purpose he felt in war. He frequently lies, scorns others, seeks meaningless sexual encounters, drinks heavily, and is initially indifferent to his task which he sees only as a means of being returned to military duty. At the start of their journey, Briggs does not have much compassion for Lulu the dog, labeling her as “crazy” and a “demon.”

Lulu is portrayed seamlessly by three different highly trained Belgian Malinois dogs, creating an appealing but also intimidating character. As an aside, I hope that those watching “Dog” will not let the beauty and charisma of Lulu persuade them to impulsively consider a Malinois as a family pet. These are dogs which absolutely require specialized training, a real job to perform, and a firm handler. They are incredibly intelligent and very driven.

If one can get past the crude language, immoral decisions and far-fetched situations, the heart of this movie is the lingering aftermath of war on the human (and canine) mind. I’ve heard it said of veterans: “… the truth is that all veterans pay with their lives. Some pay all at once, while others pay over a lifetime.” The important issues of mental health problems and veteran suicide are addressed unapologetically in this film.

Briggs calmly but resignedly states, “Rangers will find a way to die” as he discusses different methods of committing suicide. The veteran suicide rate is indeed shockingly high, with those aged 18-34 dying at a pace of almost three times that of non-veterans. Human life is precious to God, and we need to offer help to those who feel they have no hope.

One former Ranger in the film offers encouragement for both Lulu and Briggs, saying, “We're trained to carry the whole world on our backs, but sometimes the hardest thing is just knocking on your friend’s door.” This character also gives advice, suggesting that Briggs talk to other veterans and even to God about his problems… but then his wise counsel goes astray as he continues. He urges Briggs to talk to God, even if “God” is just an inanimate object like a rock or tree, claiming that “everyone has to pick something at some point.”

This friend is right in that everyone will seek after something to fill that void in their lives, but he does not point Briggs to the peace which can be found in a relationship with the one true God.

Briggs has a very closed mind to such things, as we see him urinating on a sign which lists one of the Ten Commandments, scoffing at the very idea that he should talk to God, and responding to a friend’s offer of prayer with a prideful “I’m fine.” Like many people, Briggs believes that he can do this on his own.

Other characters who encounter Briggs automatically label him according to their preconceived ideas. He is called out as having “toxic masculinity” and a “white savior complex,” a redneck who is cruel to animals (because he left Lulu locked in his truck), a pawn for big oil, and as someone who would relish getting payback on Muslims by letting his dog attack a man dressed in traditional Arab garb.

These unfair stereotypes against white men and especially against the military do exist, and I’m glad the film chose to address this. Other stereotypes across cultural lines are tested as well, so that no one “side” in our current cultural climate should feel excluded. I was surprised at the amount and variety of cultural commentary in this film. I was not surprised at the amount of content of concern.

SEXUAL CONTENT: Briggs is often seen shirtless and occasionally only in briefs, as well as in a wet white shirt. He tells the dog that it as been a long time since he has “gotten laid” and goes out to a bar in an attempt to pick up women. Two women wear immodest clothing and hold hands as if they are a couple. In an extended scene, these women begin a “Tantric sexual healing” session with Briggs, cuddling with him on the couch and removing his shirt, but this is interrupted. The male lead and the dog share a bathtub, with the man saying that he expected to be bathing with someone else. A man makes a joke about dating another man’s mother, saying “I’m trying to give you a baby brother.” Brigg urinates on a sign (not graphic).

DRUGS AND ALCOHOL: Characters are seen drunk and several scenes take place in bars. Drinks are given in honor of a dead friend. The main character drinks hard liquor very heavily and is often seen taking large doses of prescription pills. Percocet (a narcotic analgesic) is jokingly referred to as “the breakfast of champions.” A marijuana growing operation is shown, and characters eat “homemade edibles” in the form of lollipops. Allergy pills are given to the dog to calm her down. A character is shot with a tranquilizer dart. At a homeless encampment a man acts erratically as if on drugs.

VIOLENCE: There are scuffles, chases and angry encounters. One scene is very ominous with threatening words and weapons. A character is bound. The dog’s memory book shows photos of Lulu undergoing surgery, and drawings of Lulu in attack mode. A character has scars from war injuries. Dogs are seen bite training with a padded suit. Lulu is caged, muzzled and actively resists interaction with growls and snaps, occasionally attacking others (nothing graphic shown). There are references to kill counts and dead bodies in the photo album (not shown), and body cam footage of Lulu’s war-time work is seen briefly. Lulu kills a chicken off-screen. There is a bloodless medical emergency. Characters reference suicide and specific ways it might be accomplished.

OCCULT: A “Tantric healing ceremony” begins. A pet psychic tries to connect with Lulu and references previous “incarnations.” Valhalla is mentioned. Lulu’s memory book is called a “Bible” by one character.

I’m afraid that the take-away for many will be the worldly view that the dog’s life is just as valuable as the man’s. One character in this film cries out, “Dogs are people too!” and sadly, I think that many people believe this. I love animals, and there have been dogs and other animals in my life which brought rich friendship and joy. I fully believe that dogs were created as a companion and helper for mankind and should be treated with compassion and respect. But the love of a dog was never intended to replace human relationships or to be considered as a source of meaning or “salvation.” While caring for a dog can add some purpose and fulfillment to one’s life, it is not a replacement for following God’s purpose and finding ultimate fulfillment through a relationship with Christ.

Although many trailers portray this film as a lighthearted road trip with a funny mismatch of man and dog, it really is not. Content concerns involving language and sex abound, and heavy themes such as suicide, PTSD and depression are throughout. While the human and canine acting is quite believable, the tone is confusing, the scenarios are outlandish and the conclusion seems hurried.

Thankfully, it contains a strong message about the need to address veteran trauma and suicide, and for this reason it has value. It definitely highlights the urgent need, although it does not offer a lasting solution.