for graphic violence and strong language 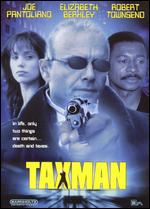 This is a low-end action film which I found on the “free rental” shelf of a local video store (a “screener” copy of a film that they decided not to stock). Most of the stuff on that shelf is pretty poor, but there are some (relative) gems.

Al Benjamin (Joe Pantoliano, “The Matrix,” “The Fugitive”) is a New York State tax investigator with an abrasive personality. Rather than just collecting his pay, he decides to go out and actually find something to investigate. There are rumors that someone in the Russian community of Brighton Beach is pocketing the taxes on hundreds of millions of gallons of gasoline. Benjamin and a uniformed NYPD cop/Russian interpreter, Joseph Romero (Wade Dominguez, Dangerous Minds, City of Industry) become a reluctant-buddy team in a wildcat investigation.

A Russian Jew, Andre Rubakov (Michael Chiklis, Nixon, Wired, TV’s “The Commish”), owns a string of gas stations and refuses to sell them to the organized crime network. Though he too cheats on his business taxes, Andre is projected as a relatively nice family man. In lieu of prosecuting him, Benjamin forces Andre to feed him information about the bigger fish. This puts Andre in danger and earns Benjamin the undying enmity of Andre’s adult daughter Nadia (Elizabeth Berkley, Showgirls, The First Wives Club, TV’s “Saved by the Bell”).

Content Warnings: Profanity is extreme. There are several on-screen firearms killings with blood, but no bullets-thudding-into-flesh special effects. There’s no sexual content or nudity. There’s a running joke about the possibility that Romero is gay, and some slang in that regard that I’ve never heard before. Benjamin’s voiceovers throughout the film remind us several times that “Everybody hates the Taxman—it’s Biblical.”

Positive Content: Benjamin does his job even when his department doesn’t give him any support; he refuses a huge bribe; and he actually cries over the death of someone that he put in harm’s way.

The plot lacks the splashy grabber scenes that are considered necessary these days, and the special effects are somewhat low-budget, but the acting is very good. It almost feels like a true story. I recommend it for mature viewers who enjoy this genre.