for a murder and other action sequences in an adventure setting. 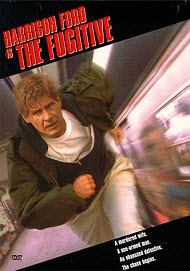 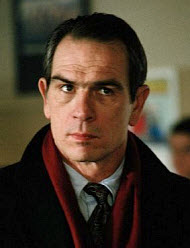 “A murdered wife. A one-armed man. An obsessed detective. The chase begins.”

If I had to pick my favorite action-thriller of all time, I know “The Fugitive” would be at the top of my list. From the opening credits to the tense finale, this film consistently keeps my interest, even having viewed it previously.

Many of you may remember David Janssen as Dr. Richard Kimble in “The Fugitive” TV series which aired in the 60's. Even if you have not seen a single episode, you will enjoy Harrison Ford’s cinematic portrayal. Dr. Kimble has been falsely accused of killing his wife. He is convicted, but manages to escape from custody in order to track down the real killer. Tommy Lee Jones won an Oscar and a Golden Globe for his supporting role as U.S. Marshal Samuel Girard who is given the task of tracking down the escapee. The plot takes many unexpected twists that will keep you guessing.

Kimble is the protagonist, but we should not portray him as a hero. He is a doctor, and as such attempts to help those who are injured in his path, but when a life is not at stake, his morals have to be questioned. In order to “clear his name” of murder, he breaks the law in several other respects: he evades arrest; he steals clothing, medical equipment, food, money, a vehicle, and a hospital ID; he lies; he impersonates hospital personnel and he breaks into a suspect’s house. Though this may make an exciting film, this is not model behavior.

Young kids may want to avoid this film in it’s original form, but the edited for TV version may be less offensive. There are more than 30 uses of profanity in this film, and quite a few are part of the memorable lines which would otherwise be quotable. This is also a violent film, but not in a gory sense. There are shootings, a bludgeoning, a stabbing, a bus wreck, a train derailment, and fighting, but nothing that is shown in gruesome detail. There is a suggestive dream sequence, but no nudity, and it is his departed wife he is dreaming about, not an illicit scenario.

I would recommend that you see this film. Harrison Ford puts on a SPECTACULAR performance, and the thrill of the chase is quite enthralling.

Positive
Positive—This is one of the best crime mysteries ever made. The murder is not graphic or disturbing. Richard Kimble and his wife were obviously very faithful to each other and loved each other very much, and, when his wife was killed, he is determined to find justice.

Not every single thing he does as he flees is right, but, overall, he keeps high moral virtues. We need more movies like this, that promote standing up for justice no matter what the cost.
My Ratings: Moral rating: Better than Average / Moviemaking quality: 5