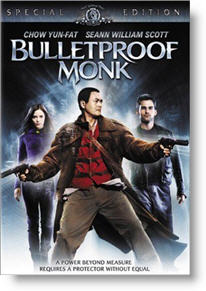 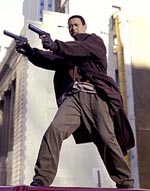 Every so often, an intelligent action movie comes along—an action movie with style, an original story and strong moral values—like the Spider-man series. Unfortunately, this wasn’t one of them. In what seems to be yet another movie based on a comic book, “Bulletproof Monk” follows the adventures of a nameless monk who is the protector of a mysterious and powerful scroll that supposedly, if read by the wrong people, could unleash terrible powers. However, it seems to be the wrong people who are bent on getting a hold of it (think the Nazis from “Raiders of the Lost Ark”).

The monk is chased for 60 years, until he makes his way to New York City. There, he meets streetwise thief Kar, who seems to fulfill ancient prophecies about the future protector of the scroll. Feeling that the time has come to pass the scroll on, the monk must keep one step ahead of his pursuers while teaching his new apprentice the ways of the Nameless One.

Positive content: There are a few things to appreciate in this movie. The Monk seems to be a very moral character. He returns wallets that Kar has stolen and even Kar gives food to a hungry beggar. The Monk, Kar and former mafia princess Jade all go out of their way several times to help people in need.

Both Jade and Kar are faced with decisions to leave their friends in peril or go back to save them. The film honors the idea that even ordinary people can do extraordinary things if they just believe (although, of course, it begs the question belief in what?). Jade questions the logic of showing pictures of violent atrocities at a human rights exhibition, worried that they might prompt future brutalities, a question relevant to today when one applies this to what we see on TV and the rest of the media).

Profanity: Unfortunately, the cons far outweigh the pros. A serious con is the foul language. Kar seems to be the most foul-mouthed, but altogether, I counted 10 “s” words, 9 hells, 5 a**es, 3 d**ns, 1 S.O.B., and 4 misuses of Our Lord’s name. A few mild sexual innuendoes also mar the dialogue and at one point, Kar is threatened with castration (in crude terms).

Sex/nudity: As far as sex and nudity goes, there is nothing extremely terrible in this film. One scene finds Jade mildly seducing a gangster to save Kar, making out with him briefly, then chaining him to a post. Another scene finds Kar and Jade engaging in a brief, but sexually charged tussle. Jade dresses in a midriff and cleavage revealing top, but nothing nearly as bad as last year’s “Catwoman.” The Monk gives Kar a salve for his wounds, and then states that it’s made from his own urine.

Violence: The most objectionable content is the non-stop violence from beginning to end. The opening sequences finds the Monk engaging in over-the-top martial arts practice with a fellow monk, very much the norm for the rest of the movie. The Monk, Kar and Jade all fight off several bad guys with kicks and punches, all very comic-book style and bloodless. They also shoot several people. Elsewhere, several monks are mowed down by machine guns. A character is strangled by a phone cord (mostly off-screen). A monk is strapped to a machine and ruthlessly tortured (we see his pained facial expressions). Another character is electrocuted and falls to his death. Two characters are shot with some blood, but are later seen to be unharmed.

Spiritual content: There is some spiritually disturbing material present, but not nearly as much as there could’ve been. When the Monk is given possession of the scroll, eerie, supernatural effects surround him and he seems to gain special powers (he is bulletproof and can go for 60 years without aging). Other characters are similarly affected by the scroll. The Monk himself is Buddhist and starts out in a monastery where he says that he has learned about universal truth. Throughout the movie, he mentions various other Buddhist/Taoist ideas. One gangster seems to have weird tattoos on his body, some possibly being occult.

In general, I found the movie well-made and well-acted. I enjoyed the tongue-in-cheek humor and cheerful bickering between the Monk and Kar. The story, if not original, was enjoyable, the characters interesting and the stunts amazing (one scene finds the Monk dodging every blow thrown at him while holding a bowl of Cocoa Puffs upright), if not slightly computer-generated. However, I was disappointed with the weird spiritualism, the continual violence and profanity, and even with the brief sensuality. That said, I’m afraid that not only is this movie “bulletproof,” it is also “family-proof,” and I can’t recommend it.

Negative—I went to see this movie thinking it would be a Jackie Chan-like martial arts spoof. In a way it was; however, there were a lot of non-Christian undertones, including numerous references to Enlightenment and other Eastern Philosophy. The action sequences were well done and there was a lot of action. There was no sex, but there were some scenes of mild torture. The plot line was predictable—bad guy tries to rule the world, good guys win in the end and live happily ever after.
My Ratings: [Average / 3]