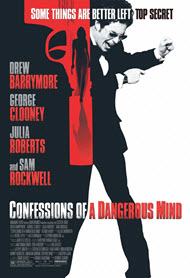 I don’t want to devote too much time to this thoroughly perverse piece of filmmaking, but I would like to offer the following warning: When you hear the hype this film is receiving from mainstream critics, don’t buy it—there is nothing uplifting in this self-aggrandizing, self-pitying, often-pornographic account of game-show creator Chuck Barris’ life. Unfortunately, Hollywood often equates a movie’s willingness to explore the ugliest aspects of humanity with some kind of courageous artistry (nevermind that portraying truth and beauty is an infinitely more difficult task). What is most upsetting is that screenwriter Charlie Kaufman (“Being John Malkovich”, “Adaptation”) and first-time director George Clooney do have talent; they’ve just chosen to waste it on a project that offers a sly, cinematic wink at a parade of wickedness.

The film opens with a back-shot of a naked man who begins to reminisce about the sexual advances he made on a young girl when he was in grade school. This raunchy tone continues throughout “Confessions of a Dangerous Mind”, which stars Sam Rockwell as game-show creator extraordinaire, Chuck Barris.

If humiliation-based reality shows like “American Idol: and “Joe Millionaire” are an annoyance to you, this is the man you have to thank for it. Based on Barris’ highly suspect autobiography of the same name, the film accepts that, while piloting new television genres, the man behind “The $1.98 Beauty Pageant” was also a hit man for the CIA. Perhaps they should have re-titled it, “Confessions of a Deluded Mind”. Yet for all the incredulity the plot inspires, the film works—giving even the most skeptic viewers a moment of “Well, what if…?” This is based in large part on Rockwell’s astounding performance. Long undervalued as a character performer in movies like “Galaxy Quest” and “Charlie’s Angels”, Rockwell has sadly found his “break” with the most offensive material possible.

Backing up Rockwell, both Drew Barrymore and Julia Roberts turn in exceptional performances, with Barrymore providing the film’s only true bright spot. Though her character is promiscuous and somewhat needy, she succeeds in giving Barris’ girlfriend, Penny, a degree of innocence and vulnerability. As for Clooney, he plays CIA Agent Jim Byrd with his usual measured, hard-tongued delivery. The only difference between this character and those he played in “Ocean’s Eleven” and “The Perfect Storm” is that here he has a moustache.

Famous for catering to lowest common denominator, Barris struck a chord with the American people, and seems to have hated himself for it. Perhaps that’s why he created his mercenary alter-ego. Or maybe he just saw another opportunity to laugh behind the audience’s back all the way to the bank.

Sex, vulgarity, and degradation—Chuck Barris knew how to give the people what they want. And so, apparently, does George Clooney.

Positive
Positive—You know, I agree with the comment made by Kirstin that this man’s life was wasted. And I think Chuck Barris knows this. He knows and says in the movie that he really didn’t contribute anything to anybody in his whole life. He is a constant screw up, he makes terrible decisions, and there is no epiphany to rescue him from any of this. I think that could be the reason Barris made up all this mumbo jumbo about being a spy. The man just gets more and more pathetic. By the way, I really liked this movie a lot.

I realize that many people will say, “I didn’t like it, because there was really no one to root for. The main character is horrid.” I agree, and, uh, that’s kind of the point. To me this film served as a warning against taking Chuck’s path. He never bothers to build relationships, he just tries to see what he can ge. About the film itself: Clooney did a fabulous job directing. All of the acting is good, but Sam Rockwell is brilliant. He is absolutely flawless in this picture. It is a shame that there are only 5 nominees for Best Actor, because Sam Rockwell really should be one of them. As for the content, there are many shots of male rear ends (I was not offended, I was amused more, but I supposed not everyone will appreciate Sam Rockwell’s behind) and there is quite a bit of sexual content, though no female nudity.

There is also quite a bit of bad language, more than the usual in a Kaufman screenplay. Also, there are a lot of jokes that guys will find amusing, but girls won’t. Sorry, it’s the truth. I completely understand that point of view, but I must add that this film was no more disgusting, in fact it was less disgusting, than any of the Austin Powers movies. Overall, I thought the film was funny,witty and clever, and sad, pathetic, and to a certain degree, dark. I still maintain that it is a warning to that kind of lifestyle. Just because Chuck Barris is a sad-sack loser doesn’t mean he can’t be funny.
My Ratings: [Somewhat Offensive / 4]

Jason Eaken, age 19
Negative
Negative—This was a very immoral film laden with illicit sex and profanities. There were at least two negative references to our Lord Jesus which would seem amusing to the unsaved but make any true Christian cringe. We were mislead by non-Christian reviews. Stay away from this film if you want to keep a clear conscience. My wife and were sorry to have seen it and repented.
My Ratings: [Extremely Offensive / 1]

Joseph Maslack, age 47
Negative—I do not recommend this film. I was offended at the explicit sex scenes, bad language, and negative topics of conversation throughout the film. Aside from this, the mood of the film was depressing and worldly. There was nothing uplifting included.
My Ratings: [Extremely Offensive / 3]

Kathryn, age 23
Negative—This movie was disturbing to say the least it had sex scene after sex scene, foul language thoughout and Christ was mocked one too many times. On top of that the character seemed to take pleasure from killing others without any major consequences. He tells his bride on their wedding day that he has killed many people she laughs and he laughs end of story. What a tragic life. I was in shock and should have walked out of the theatre after the first 5 minutes of the film, but thought it would get better… it only got worse. I spent most of the time covering my ears and averting my eyes from the screen. Had to confess my stupidity for staying later on that night. Please don’t waste your money this movie is immoral from start to finish.
My Ratings: [Extremely Offensive / 2]

CC, age 32
Comments from young people
Negative—This movie was disgusting! In the first ten minutes there are several references to sex between children, an EXPLICIT sex scene, and the most foul and offensive language possible. The main characters time is spent looking for sex at amusement parks and speaking of his wasted life. A very sad world view.
My Ratings: [Extremely Offensive / 1]