for some violence/disturbing images, language and a scene of sexuality 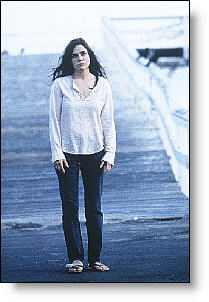 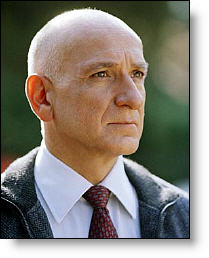 Once in awhile a movie which many might regard as patently offensive (see my review of Girl, Interrupted) ends up stradling the line between a study in reality and baseness, between human depravity and exploitation of the medium of film. This one should provide ample opportunity for debate. This is not a movie for teenagers or adults with sensitivities.

The movie is a dark one with sweepingly stunning cinematography and rather good acting. It takes place close to my home, just south of San Francisco in the seaside town of Pacifica. It moves very slowly for quite awhile, lulling you into thinking it’s going to be a bore. But then it grabs you for an ugly ride into the hell of lusts and avarice ending in death. It is a mystery/drama and keeps you guessing until the end. All the guesses I formulated during the movie were way off.

Ben Kingsley, who plays Behrani, is superb and you expect that. The surprise is Jennifer Connelly (much better acting than in “A Beautiful Mind”) who deftly compliments Kingsley’s character as Kathy Nicolo and impressively emotes the role of a young woman caught in a death spiral whose family abandons her on all fronts.

One major theme the film is dealing with is interesting, that of racism. Through twists of fate, a displaced Iranian family is struggling to maintain the illusion of their wealth in pre-Shah Iran, but unwittingly clashes with nearly misanthropic but wronged Kathy. They have bought her house in an auction because of back taxes. Unfortunately, the bad decisions Kathy is talented at making attract the wrong types to her including Ron Eldard who plays a sheriff who is royally mixed-up. He leaves his family after meeting her, shacks up with the alcoholic and helps greases the skids of her downward spiral landing them both into that hell mentioned earlier.

From a Christian perspective, there is much of the worst side of humans: alcoholism, murder and suicide scenes, racism, violence and a sex scene. There is liberal use of the f-word, a man abandoning his family for no reason, domestic violence and plenty of hypocrisy to go around. The sex is heavy, even though there’s only one scene. I don’t believe soft porn belongs in mainstream movies. There is one other nude bath scene. I reserve the category of Extremely Offensive for the very worst films which I don’t go to thanks to being able to screen movies beforehand on this Web site!

This is where the question comes in of whether the film is exploiting our human worst or whether it is attempting to study it. My opinion is unregenerate humans cannot study it, they only think they are. If they were, their logic would lead them to Christ but only God’s grace can accomplish what is impossible for us on our own. As a Christian, I can study it but others may not feel this is the appropriate film from which to do so. This is a dark film and most people exiting the theater were not happy with it, based on the comments I heard.

Negative—I went to this movie with expectations of an exciting well written drama. When I walked out of the theater at the end of the move, which was full, nobody was talking. We were all stunned. As a Christian, the thing that struck me so hard and still does 3 days later is how the human PRIDE drove every single person in this story to say and do everything they did. As a member of Alcoholics Anonymous for over 10 years, I read and hear over and over again how PRIDE tops the list of the 7 deadly sins. This film graphically depicted just that. It is a very dark, sad film. But it reaffirmed my commitment to serve God in everything I do.
My Ratings: [Very Offensive/4]

Debra S., age 44
Negative—Too dark and disturbing. “House Of Sand And Fog” may begin intriguingly. The characters are conflictingly boxed in by their circumstances. How will they get out? But from there the movie continually degenerates to a pointless ending. It was like an even more depressing version of “American Beauty”. Not recommended.
My Ratings: [Very Offensive/2]

Todd Adams, age 36
Positive—I thoroughly enjoyed this movie and was totally affected by the script. In so many ways it was written like a true life event, an experience chronicled rather than scripted on a porch. …when considering the reality of sin in human life and its portrayal in “House of Sand and Fog”, how it intersects our desire to provide for our families through attaining wealth and at what costs, the end result of unfulfilled desire apart from happiness in Christ, the false satisfaction of honesty from a failed marriage all of these issues impact both believer and nonbeliever alike.

But, if you view this as a believer, it makes you run to Christ as a source for happiness. I do agree with others though, because of its depressing nature, it is not to be viewed by the feint of heart.
My Ratings: [Average/4]

Steve Terrell, age 51
Positive—Another viewer noted that there was a similarity to American Beauty, [though this apparently was a bad thing], and it is similar, its very real. Many of us could make similar choices as these characters do, they lack the ability to look over themselves, beyond their own sphere. Without this ability to look over ourselves, when our lives are shattered by a tragedy, just like the Bherhani’s and Kathy’s, lives were, we too can shatter.

This movie shows the importance of faith, in God, in each other, and the fundamental quality of understanding, love, and sympathy we must have for those whose lives have fallen apart. A masterpiece.
My Ratings: [Average/5]

John Vychytil, age 20
Negative—I really thought this might be a great movie about someone who lost their house due to a government mix-up and how it would all come together in the end and be worked out. Unfortunately, it wasn’t that. THe movie started out good enough and seemed decent but the end was horrible the woman kills herself over a house. The man who took her house who was unwilling to give it back to her even with the govt offering to give him the money he invested in it back ended up killing his wife and himself after their son is killed.

In the end this movie was horrible—people were killing themselves over a house. People threating to kill each other and have people deported because of it. It’s crazy and just outrageous. Although I believe there are people like this in the world this weird, this ruthless, I don’t see that it was something someone should make a movie out of… I don’t even know why they even bothered to make this movie.

I guess that’s why it was a art film or an independent film because it was to horrible for anyone else to want to finance it. Save your time your money don’t rent or see this movie.
My Ratings: [Extremely Offensive/2]

Jason, age 28
Positive—This is a dark film, not for kids. I loved this film because for me, the weight of right/wrong kept leaning interestingly on one side, then another. The moral dilemma posed in this film made me think about the essence of right and wrong. Excellent film—one that I have not been able to forget.
My Ratings: [Average/4]

Jurny, age 40
Positive—This an excellent film that focuses on some very real issues that face us in modern times. The obsession of materialism, displayed by the absolute blind greed, on both sides, through the symbolic figure of the house, I think is key exploration of the film. This is balanced by the humanity that surfaces most notably in Ben Kingsley’s character, but also in Jennifer Connelly’s, which adds not only the complexity of real people, but also lends credibility to the story.

Finally, I think the film quite rationally portrays situations that really seem to have no clear resolutions, and this is really what life can bring—problems that have no answers. A lot of Christians are offended when they see a movie as too “dark” because in the end, the guy doesn’t get the girl, nice people die… If portraying life realistically is too dark, then life is too dark, because that is often the way life is. On this rock, you don’t always find sunshine at the end of the night. People often take drastic, often seemingly irrational steps because they honestly, justifiably see no other way. I am personally offended by the constant bombardment of audience-friendly Hollywood endings.

This is an excellent film, a realistic film, brilliantly acted, well-shot—a tough look right into the eyes of a bleak reality.
My Ratings: [Average/4]

Doug Coleman, age 22
Comments from young people
Negative—This movie probably had some of the most unlovable characters. The more you look at their lives and the way they live them, the more you dread watching them on screen. It was like chewing glass with this movie… it had no redeeming value, no one came out a better person, and you will not feel like a better person when you step out of the theatre.

It leaves you feeling cold, and leaves the heart desiring some warmth of love and compassion. It’s dark, clammy, and dead in the spiritdegenerates to a pointless ending. Don’t see it.
My Ratings: [Extremely Offensive/2]

themovieone, age 18
Neutral—The lights came back on after the movie was over… and the theater audience was absolutely silent, not a word came from anyone after this movie finished. This film is an impressive debut for newcomer Vadim Perelman. he has created a masterpiece of film work and artistry… but it is also very offensive, dark and depressing at the same time.

But seeing as how this is an Academy Award hopeful, and most definitely going to be a contender, the performances from the entire cast are excellent, and worthy of an award. The cinematography is spell-binding, though the use of actual fog goes overboard at times, and becomes kind of annoying.

So, overall, this film is an expertly crafted film, though it might not get much of an audience due to its extremely depressing nature. If there is one word to describe this movie it would definitely be: Depressing!
My Ratings: [Very Offensive/5]

Dr. Tom Snyder, Movieguide
…‘House’ makes its biggest mistake in thinking it occupies an ambiguous moral gray area, when in reality it was half right and half wrong from the beginning…

Lou Lumenick, New York Post
…[not recommended] because of brief scenes of sexuality and some bad language… but this is a thought-provoking film with some merit…