for language and violence 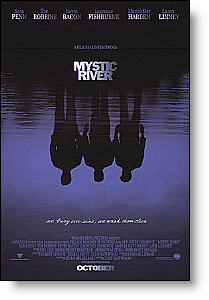 Note: The film is rated R for language (pretty strong and consistent, very much at home in inner-city Boston) and violence (not frequent, but troubling and moderately bloody when it occurs). Though not enough to be listed with the R rating, there is certainly some mature content here, dealing with implied sexual abuse and other mature themes. The movie demonstrates the effects of sin in peoples lives, and how they deal with those lasting effects. This isn’t a movie for kids or young teens, but honestly only a more mature audience is going to be interested in this one. Mature teens and adults should view with discretion, mainly considering the strong language.

Three childhood friends, separated by terrible tragedy, are reunited as adults when tragedy befalls them again. While the concept may sound familiar, it has never been fleshed out and executed quite like it is in “Mystic River”, a drama by actor-turned-director Clint Eastwood.

Eastwood and his stellar ensemble cast turn out a film that is both troubling and moving, a tragic picture of lives forever marred by pain and struggling to make it through a new challenge. The film follows the lives of Jimmy Markum (Sean Penn), Sean Devine (Kevin Bacon), and Dave Boyle (Tim Robbins), three childhood friends who grew up together in Boston, only to have the innocence of their childhood painfully shattered when a horrible crime befalls Dave. When next we see the three as adults, they have all gone their separate ways, remaining in only casual contact. Yet when Jimmy’s daughter is horribly murdered, the three are brought back together, Dave and his wife Celeste (Marcia Gay Hardin) to console Jimmy and Sean as the officer in charge of the investigation.

As the search for the killer ensues, old demons are unleashed, fears are faced, and the three men are sent down an inescapable path that will change them all forever.

Despite a solid script and ample directing by Eastwood, the performances totally steal the show. The three leads are exceptionally strong, with Robbins giving his best performance since The Shawshank Redemption, Bacon his best since Apollo 13, and Penn his best period.

More than any other character we feel like we really get inside Jimmy’s mind seeing the simultaneous anger and love that drive his every move. His performance is certainly Oscar caliber. Penn and the others are also surrounded by a unusually strong and consistent supporting cast. Lawrence Fishburne (The Matrix trilogy) is terrific as Sean’s partner, a cop whose instincts are not restrained by personal connection to the crime.

Equally convincing are Hardin and Laura Linney, who plays Jimmy’s wife Annabeth. Hardin’s performance shines through in the moments when she questions her husband’s mental condition, and Linney is wonderful as Jimmy’s silent yet strong support. The cast is the best ensemble of the year, and probably the year’s strongest cast period.

Eastwood directs the cast with great skill, making a movie whose slow pacing adds to the character drama. He basically seems to have stepped back and let the acting dictate the film, while his direction, while noticeable, stays in the background. Likewise, the limited score is quite minimalist and leaves the emotion to the characters. Composed by Eastwood, the score does seem poorly executed, one of the film’s few drawbacks, but to spend money on an A-list composer for so little music wouldn’t make much sense either.

The cinematography is symbolic yet subtle, with the wash of blue tones and shadows adding to the somber mood of the film. All of the technique evident, however, seems to function only to highlight the tremendous performances of the actors and the well-written script.

Without giving too much away, the film does follow its tragic tone with consistency. Though some people at the screening I attended seemed to leave disappointed, I admired the movie for bucking Hollywood convention and following its story to its natural, logical end. Not to say that the film’s ending is a bust, but it lacks the clean, tidy resolution that is common in films of the type. Once again, this only highlights the characters, their flaws, their feelings, and their lives.

These characters are very real, their current plights are in some way or another results of their pasts, and the scars of sin, whether theirs or someone else’s, run deep in each one’s life. The challenge for these men is to deal with and overcome their pasts, and even their present, in order to find peace.

No, the film probably won’t appeal to everyone, but for those who don’t mind the slow pacing and tragic plot there is a real jewel of a movie here. Eastwood has put together a fantastic piece of work that, while not the year’s absolute best, certainly continues this fall’s streak of very good films. It may be a difficult swim, but this is one River certainly worth seeing.

Positive—This dark, moody film explores some of the most primitive and paramount human feelings. Based on the novel by Dennis Lehane, the film stays fairly true to the book and the book’s undercurrent of dark reality shines through on film. Eastwood’s direction is excellent, I especially felt the significance of the moving wide shots of the dark currents of the so-called Mystic River. Above all though, I would have to agree with the reviewer in saying that the acting is outstanding and it defines the film. Sean Penn nears acting perfection in the role of a grieving father seeking revenge (and in the process establishes himself as perhaps the most talented actor in Hollywood) and Tim Robbins is incredible as the victim of sexual abuse whose demons still haunt the dark recesses of his mind. The moral content of the film is obviously “objectionable”, as this isn’t a film in which the characters are to be admired. I enjoyed this film thoroughly for a reason you might not expect. I saw the message of the film as very pessimistic and dark, which I think mirrors much of the imperfect, sinful world we live in.
My Ratings: [Very Offensive/4]

Doug Coleman, age 21
Positive—This is one of the best films of the year! The acting is awesome. There is not ONE stilted performance in this entire film. Tim Robbins and Sean Penn deserved their Oscars. Like the review above stated, this film deals with sin and its consequences. It is very gritty, but necessarily so. This film was so powerful. Words cannot describe how you feel after the film is over. It will stay with you long after you leave the theatre. I loved it, and I highly recommend it. Just try to keep and open mind.
My Ratings: [Very Offensive/5]

Adam Renkovish, age 21
Neutral—This is an incredible movie. One warning, though to parents: it will make you feel incredibly vulnerable and explores the angst that accompanies what children and teens are faced with in these generations. It is incredibly ironic and sad… but I’m proud of Clint Eastwood for daring to explore these emotional possibilities. Mothers, beware… it makes your heart ache.
My Ratings: [Very Offensive/5]

Kimm Friedemann, age 37
Positive—This was a disturbing, yet beautiful film. I can’t even describe the emotions that welled up in me as I watched… The darkness portrayed in Mystic River is so much a part of life itself that it almost haunts you. It is filled with raw human emotion and a large dose of reality. The acting was a perfect 10. I felt that Sean Penn was robbed of his Oscar for “I am Sam” and I was so happy to see that we won for this movie. It’s about time!!! The language is extreme (hence the offensive rating), and I would not recommend this movie for children or some young adults. However, I would HIGHLY recommend this movie to anyone over the age of 17.
My Ratings: [Very Offensive/5]

Rae, age 24
Positive—To the person who commented about the innocent man who is murdered and the killer allowed to go free. Read the book. The last little nod from Kevin Bacon to Sean Penn isn’t a forgiving one. Bacon just doesn’t have any concrete evidence against Penn at that point. To it’s credit, the book is much clearer on the fact that Bacon’s character is going to get Markum, just not in the “window” of the story itself. As for the innocence of Tim Robins’ character. The only thing he’s technically innocent of is the death of Jimmy’s daughter. David is a murderer (even if it’s the murder of a scumbag).
My Ratings: [Average/5]

John Alessandro, age 26
Negative—I really did not like this movie. It started out with a depressing theme and got worse from there. I also had a hard time understanding what the actors were saying because they mumbled or spoke too fast and with heavy accents. I wish that the Christian spotlight review had not concluded with “but this is one River certainly worth seeing” because I probably would not have watched it otherwise. I wish I had not watched this movie, it was just too depressing. I’d like to find a movie review Web site that does not just warn of language, violence or nudity in movie content but dark depressing themes also.
My Ratings: [Extremely Offensive/3]

Tim Faust, age 47
Comments from young people
Neutral—I saw this movie last night with my family and I can say that I rather enjoyed it. The storyline about a murder bringing 3 childhood friends back together after a past of mystery seemed very interesting. I feel this movie will be most enjoyable for those who enjoy mystery/drama and thrillers. I must say though that the movie had way to much profanity for its own good, but as for the violence, it wasn’t that bad, just a few scenes but nothing that will make you want to leave the theaters.
My Ratings: [Better than Average/4]

Serena Morales, age 15
Positive—This movie was a great movie with great acting.It also had a great storyline but it was also sad.I recommend this movie.
My Ratings: [Average/4]

William, age 12
Negative—This film was really disappointing. When I saw it I was confused, the characters mumble through out the flim, and the plot is weak and confusing, the acting is pathetic (with the exception of Kevin Bacon’s character and Marcia Gay Hardens character) and worse of all the main character kills an innocent man, yet the cops who know about it let him get away with it. I would not recommend it.
My Ratings: [Very Offensive/2]

Annie, age 14
Positive—I found “Mystic River” to be a beautifully done film. The language was no problem for me because of a small device called the TV guardian which removes all cuss words and mutes the sound. But for those without this, I can imagine it being a bit offensive. The violence was not in excess at all. I found this film heart-wrenching as you watch the characters go through tragic events that intertwine lives and reunite old friendships. I would certainly not recommend this film for children. But for adults and mature teens this movie is a must.
My Ratings: [Very Offensive/5]

ScreenIt
…story appears to contain a strong sense of the evil of sin and its consequences, with brief anti-Christian element where pedophile wears a crucifix but there are other minor references to the Roman Catholic and Christian faith of some of the characters and their environment…

Dr. Tom Snyder, Movie Guide
…One of the best American movies of the year, crisply well-crafted and beautifully acted…

Kirk Honeycutt, Hollywood Reporter
…one of those rare recent films whose emotional power resonates long after you’ve left the theater…

A.O. Scott, New York Times
…far and away the best-acted film of the year…