for language and emotional intensity 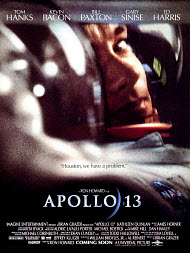 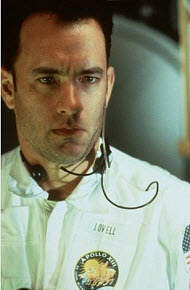 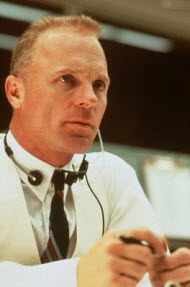 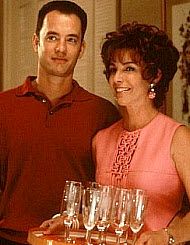 “Houston, we have a problem.”

When I consider thy heavens, the work of thy fingers, the moon and the stars, which thou hast ordained; what is man that thou art mindful of him?” The Psalmist’s thoughts came to mind after watching the amazing story of Apollo 13, and seeing how God miraculously preserved and protected the three astronauts on board this ill-fated 1970 moon mission. Director Ron Howard meticulously re-creates the tension, turmoil and changing times of what was thought to be just another “routine” space flight turning into a fight for life when a mechanical defect severely disables the crew’s command module.

Christians can marvel at the vastness of our Lord’s creation as well as His manifold grace in loving rebellious sinners like us. His grace is especially evident as we watch virtually every central character incessantly blaspheme His name or utter other profanities whenever problems arise, yet God still grants them the vision and ingenuity to persevere. Unfortunately, when God’s name isn’t being taken in vain, the film simply ignores Him totally (other than a fleeting reference to people praying for the astronauts' safe return).

Although God Himself is denied, many of His ways are affirmed through the portrayal of compassion for fellow men, diligence and creativity in affecting the rescue, and denying oneself for the good of others. We also see the initially self-centered teenage daughter of Apollo captain Jim Lovell (Tom Hanks) brought to tears and presumably a realignment of priorities as she realizes her father’s life is in peril.

On the downside, Commander Lovell and his wife are shown mildly intoxicated and becoming physically intimate following a party to celebrate NASA’s first landing on the moon. With regard to another of the astronauts, pre-marital sex is strongly implied though not shown directly. It seems that just about everyone at mission control chain-smokes in an attempt to relieve stress. Other than an initial reference to the launch pad deaths of Apollo 1 astronauts, however, there is virtually no violence in the movie.

While unsaved viewers of “Apollo 13” will likely only see glory given to the wisdom and heroics of man, believers can rejoice in salvation demonstrated in the physical realm and knowing that such can only come from the hand of God.

As one who lived through this event in history, daily glued to the TV waiting for news of the flight, I thought the movie was well done, capturing a good deal of the tension and anxiety of the time. I didn’t care at all for the “updating” done to some aspects of the movie (implied sexuality, language, the Lovell’s in the back yard, etc.). I don’t know why it’s believed that a movie won’t “sell” unless it’s juiced up. Too bad Ron Howard didn’t feel his story would live without the added junk.
Steven Klepzig, age 37
My husband and I viewed the film “Apollo 13” and, given its rating, were shocked to discover so many profanities. After watching a documentary called “Moon Shot” about the 1960’s space program, I understand that the scriptwriters were probably using many realistic words. However, I think they went further than needed.

In fact, their choice of words offended many Christians I am sure, since the word “Jesus” was used at least twice as a expletive. In light of the commandment “though shalt not take the name of the Lord thy God in vain” I think this should be highly objectionable to the Christian. Jesus Christ has been made salvation for us and his name is precious, “the name above all names.”
Lynelle Ellis
Positive—I really enjoyed this movie, especially the relationship between Tom Hanks and his wife. When the mission is stranded on the moon, we’re shown how their commitment to each other, to their family, gives the strength they both need to survive. There’s also several scenes of the wife praying. I rarely see this in Hollywood pictures. While there were a few objectionable words, the core relationships, and sacrifices made by the crew members resonated with me as a Christian.

As Laban said to Jacob: “And now come, let us make a covenant, I and thou; and let it be for a witness between me and thee.”
My Ratings: Moral rating: Good / Moviemaking quality: 4½
Anne, age 39 (USA)
Comments from young people
This was a very realistic representation, I thought, of what the real Apollo 13 mission was like. One word of warning that the reviewer did not include, there are 50+ instances of profanity in the film. Other than that, it was a great movie.
Adam Brooks, age 16
I really enjoyed this movie. It was extremely exciting, and I was on the edge of my seat the entire time. (But my best friend fell asleep. I don’t know what was wrong with her!) What made this movie even better, was the fact that (the event it portrays) actually happened! Anyway, watching the way these people reacted to this horrible crisis made me truly admire them. I agree that the profanity was quite frequent, but I also feel that at least some of it was necessary (if it truly happened that way). I give this movie 2 thumbs up!
Candi Gould, age 16
My friend says this is the best movie ever made. He is a NASA-fanatic. …I never make excuses for objectionable content, but this is a true story and it is very admirable the way Americans were so concerned about our astronauts. There is much more redeeming value in watching a true story than in most other films these days.
Michael C., age 15
Negative—I rented “Apollo 13” thinking that I was going to watch a historical drama and learn about the mission. Instead, however, I was greeted by a movie with 20+ sh** words, at least 2 da**s, and 1 SOB. There was also an instant where a man was in the shower with his girlfriend (not married). Overall, I think that this movie was offensive and that I shouldn't have watched it.
My Ratings: Moral rating: Very Offensive / Moviemaking quality: 4½
Amarissa Ruiz, age 13 (USA)