The Legend of Johnny Lingo 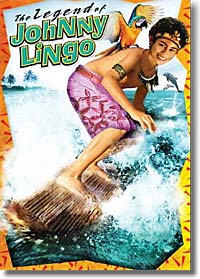 What are the differences between Mormonism and Christianity? Answer

Should a Christian pray about the Book of Mormon to see if it is true, as LDS missionaries suggest? Answer

With so many cults and denominations, how can I decide which are true and which are false? Answer

More about Religion and Mormonism

Recommend ministries for helping those involved in Mormonism, or for education Christians…

Am you good enough to get to Heaven? Answer

“The Legend of Johnny Lingo” blends the themes of “Cinderella”, “Snow White”, “Ugly-Duckling” and “Pygmalion” to produce a charming movie smoothie. Packed with too many biblical parallels for the length of this review, I will discuss the movie and inject important spiritual truths as they occur in the story.

The film, adapted from the short story authored by the late Patricia McGerr, begins as a baby washes up to shore on an island in the South Pacific. Imagined to be a sign of favor from the gods, the infant is adopted by the tribal chief and named the future chief even despite the fact that he already has a son. Resentful of the decision and concerned for her natural child’s future, the chief’s wife plants seeds of discontent within the community and after three long years of turmoil and, the chief disinherits the adopted child. Once again, Tau is orphaned. He is the village outcast and totally alone until he meets Mahana, also an outcast.

The two children form a strong bond of friendship and commitment to one another. But eventually, unable to live in the abusive home of Mahana and her drunken father, Tau plans to leave. Instead of leaving, Mahana chooses to remain on the island to care for her father. Mahana’s decision to look after her father, a cruel and harsh man who blames her birth for the death of his wife, illustrates the Lord’s command to honor our parents. We honor our parents because the Lord has placed them in this position for a purpose and it is the position we respect, not their personality. We obey the Lord no matter how unpleasant the circumstances.

Tau drifts at sea for many days and is discovered by the Chief Steward, a long time friend and loyal employee of the legendary Johnny Lingo. Seeing the boy as a rough diamond in need of polishing, Johnny Lingo decides to help him. Tau is dazzled by Johnny’s wealth but remains suspicious of him and he misses Mahia.

After a careless accident, Tau tries to leave the island with stolen goods and is caught. Johnny extends mercy and offers Tau the chance to work as penance. From a Christian perspective, Tau’s sin is forgiven but not without consequences. Isn’t this what the Lord does for us? Although Tau’s intentions for stealing were to find Mahana and keep his promise, Johnny wisely explains that true love could not be honored with stolen goods.

From this point on, life improves for Tau. Time passes quickly and the great Johnny Lingo, who believes everyone has value and potential, trains Tau to become a sea trader. Johnny and Tau develop a father and son relationship. At one point in the movie, an event occurs causing Johnny to willingly sacrifice his own security in exchange for Tau’s safety. I’m reminded of how Jesus sacrificed his Heavenly throne and endured a tortuous death for our eternal security—salvation.

Still, despite his radically changed life, Tau misses Mahana and longs to return to her. He had made a promise and wants to keep it. The rest of the movie is predictable, but wonderfully so.

The negatives are minimal and almost not worth mentioning, nevertheless: There is some minor violence; Tau is attacked by some boys. Mahana is made fun of by the other girls and ridiculed by her father as being ugly and worthless. With the exception of Mahana, women are portrayed as gossipy and cattish.

The acting was OK, but then I don’t believe the producers intended to focus on externals. The film’s message is clear: Good character bears witness to true beauty.

After the movie, my family discussed the importance of honoring our parents, receiving forgiveness (but accepting consequences that follow), developing inner beauty, and keeping our word, both to the Lord and others. So, if you decide to view “The Legend of Johnny Lingo”, lean back to enjoy a virtual vacation to the South Pacific, but don’t neglect the many opportunities to further ground your children in the concrete spiritual truths and lessons it offers.

Editor’s Note (background on this movie): The film is based on a short story by the same title (published in the mid-1960s) and written by mystery novelist Patricia McGerr. Perhaps because Church of Latter-Day Saints (LDS, aka Mormon) missionaries were heavily involved in planting churches throughout the Polynesian islands, the story had a special resonance within LDS communities and soon became widely translated and used as a sermon illustration. The story was soon made into a 20-minute film produced by Brigham Young University (1969) and shown repeatedly in virtually every LDS seminary.

Some talented LDS church members (including director Steven Ramirez and producers Gerald R. Molen, John Garbett, and Brad Pelo) developed the story into a 90-minute feature released in August 2003, which is reviewed here. The same producers (Molen/Garbett Productions) made The Other Side of Heaven which is “the highest grossing LDS picture thus far” and is about the life of a Mormon missionary. The film was sponsored by a Utah company called Morinda Inc. founded by Dru White (LDS) and maker of a health product called Taihitian Noni® Juice. Thus, “the juice of the noni” is plugged in the film.

The film does not seem to contain any theology unique to the LDS Church, nor does it promote the Church. However, sales will benefit the Church since LDS members are required to give 10% of their income to the Church of Latter-Day Saints.

We oppose the LDS Church because of its divergence from God’s Word. For more information, see our articles on Mormonism and on the Mormon-missionary drama by the same producers, The Other Side of Heaven.

Positive
Positive—This is one of my favorite movies. Very interesting and touching story. The picture on the cover of the movie does not do it justice and has nothing to do with the movie. Don’t let that dissuade you. It’s great for the whole family.
My Ratings: Moral rating: Good / Moviemaking quality: 4

Julie, age 37 (USA)
Positive—…enjoy the movie with your children, and use it as an opportunity to teach and encourage…
My Ratings: [Good/5]

L. D., age 40
Positive—Although this movie is not distinctly Christian, it was full of Christian values and themes that a family can use as a basis for discussion. It is so refreshing to see a film that is truly family friendly and encourages excellence in our lives.

After viewing the film, I was very disappointed to found out that Brigham Young University was responsible for its production, but it was not written by any member of the CLDS nor does it contain any of their doctrine. We had previously attended The Other Side of Heaven and left the movie very early into it (and were given a refund!) because of its blatant Mormon theme.

My husband and I highly recommend viewing of this film, and I appreciate the informative review and details that were given on this Web site. They were extremely helpful to us.
My Ratings: [Good/5]

Comments from young people
Positive—“Legend of Johnny Lingo” was an excellent movie that I had rented once out of curiosity. I fell in love with the movie because of the story of the young boy, Tau, who kept his promise to the girl that nobody wanted. It is a touching story of how no matter what others think of us, love finds in us true beauty.
My Ratings: Moral rating: Excellent! / Moviemaking quality: 4