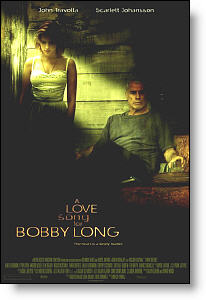 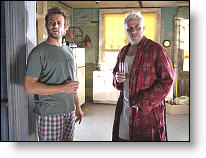 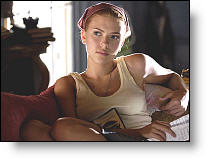 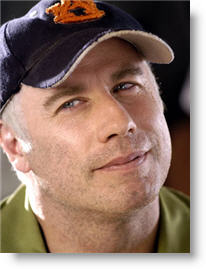 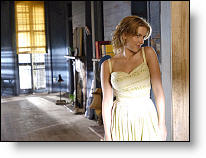 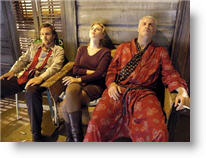 “The heart is a lonely hunter.”

It is not an easy thing to follow in the footsteps of Tennessee Williams, but Ronald Everett Capps has come refreshingly close. Writer and Director Shainee Gabel has brought Capp’s novel to the screen in an intimate yet powerful blend of crudeness and heart. “A Love Song For Bobby Long” reflects the New Orleans it is set in, as a people and a place in a state of beautiful decay.

Although listed as a comedy/drama “A Love Song For Bobby Long” is much more a drama with elements of humor placed within the story at just the right moments, as in real life.

John Travolta embraced his character totally, as did every single actor in this film, which gives it a rich, often times gritty realism. It touched my Christian heart more deeply than I had expected and gave me a look at how my brothers and sisters in destitute corners of the world need a gentle, understanding from my heart rather than criticism and disdain.

Pursy Hominy Will (Scarlett Johansson, a seasoned actress beyond her years, from the likes of “The Horse Whisperer” and “Girl With A Pearl Earring”) has been living without her mother or knowing the identity of her Father her whole life, but is drawn back to her childhood home in New Orleans upon hearing of her estranged mother’s death.

Just shy of 19, she is hardened by a life on her own, a wanderer of sorts, hoping secretly to get back to her roots and make sense of her life so far.

Finding the house her mother left her is not the proverbial southern mansion is not the only surprise. Pursy also finds house guests she didn’t bargain for—two of her mother’s closest friends claiming what she considers squatter’s rights in the rundown home. Much to their surprise, Pursy announces she will be staying in the home, and they’ll just have to get used to it.

So it is that former literature professor now dedicated alcoholic Bobby Long (too bad this may be the most overlooked performance by John Travolta, as it is his very best thus far), his protege/writer also alcoholic friend Lawson Pines (a break out performance by Gabriel Macht) and Pursy become the most unlikely of living companions. Through the course of this tender look at broken lives and redemption we get into the skin of the characters and learn to love them—overlooking their faults.

New Orleans is a town of smaller communities built around one church and one bar on just about every corner. The same people can be seen in these bars sometimes from 10 in the morning until 10 at night. The same families are at church on Sundays. These folks pass on their very existence through the tradition of oral history. Bobby Long has become the figurehead within his corner of New Orleans, everyone looking up to him and upon him for his intelligence and scholarly ways.

Lawson is not only a long time friend, but his former student, and has been living with him for the past 9 years—supposedly writing Bobby’s life story, as yet unfinished and destined to be unpublished because of the grip of alcoholism that is holding both these men back.

Pursy comes into the lives of these outcasts and sees them just as the house she has inherited—bleak, dank and crumbling. Pursy forces the shades up and makes Bobby see what is real and important in his life. She is young and fresh, yet like a bird with a broken wing. All the locals welcome her into their “family,” not just because they were life long friends of her mother Lorraine, but because they see she is just as broken as they are.

Bobby, at first, wants nothing to do with her, yet as time passes he too finds himself helping her and encouraging her to go back and finish high school. Lawson, more laid back and dignified than Bobby and also an alcoholic, has retained a true sense of right and wrong—always remaining a gentleman in contrast to Bobby’s mean spiritedness and oft times crude mannerisms.

Shot completely on location in New Orleans adds to the film’s visual sense of accuracy and ambiance. The character of Lorraine was never seen in flashbacks or pictures, but Music Supervisor Jim Black has made her an incredible presence through his selection of music. The musical score is the spine of the movie, allowing Lorraine to live within it.

“A Love Song For Bobby Long” is a contemporary mix of southern drama—fragile hearts linked by a past of secrets that ultimately reveals how inextricably these lives are intertwined. It asks the hard questions we face in life. Who will be there for me when the going gets tough? How far am I willing to go for those I love? Although excruciatingly hard to complete, through commitment and love Lawson gives the toughness and sincerity of Bobby back to the world who never knew him deep inside, in the pages of his book.

The interactions between these people affected others for good. Fair examples of love, friendship, and commitment to family shining from the characters in this film can be seen in Jehoshaphat’s enthusiasm (2 Chron. 17:3-6), Abraham’s faith (Gen. 12-22) and Job’s integrity (Job 31:1-37). As Pursy, Bobby and Lawson made a difference in the lives around them, even though it is hard to watch them stumble over the ruins they had made of their lives, we emerge the better for it with them. They show us how God provides people in our lives as “stepping stones” to help us survive and grow and become His people.

The R-rating is most appropriate, which brings me to absolutely commit this film to adults only! The story line is hard, realistic and full of impoverished souls drinking, smoking and living lives that only a mature adult could possibly understand or comprehend. Although no drugs, nudity or sexual scenes are shown, they are implied by reference to Bobby’s younger days, carousing, drinking to the point of alcoholism and to his later shame, resulting in divorce and the loss of his family. The language, although appropriate to the characters, is crude and full of countless obscenities (I stopped counting the F-word in many variations at 15!). God’s name was taken in vain four times and an obscene hand gesture along with Bobby’s fairytale story about “pussy” will cause many to blush.

The characters in “A Love Song For Bobby Long” are real. They are not made over to be something they are not. They are our shame, our secret passions, our unspeakable sorrows and failures laid wide open. The audience can choose to look or to grimace and walk away, but to walk away is like abandonment to the commitment Jesus had to sinners who were the invisible nobodies he chose to live with, eat with and sooth. The broken (those with horrible faults) are feeling humans beings and deserve our care. Below the tough exterior of these characters, you know there dwell souls who remain loving, strong and unconditionally dedicated to one another. When we are forced to view the harshness within the story of this film, we also learn to understand how the characters got to where they are, and we are able to forgive them at the end, as they move on. Jesus would do no less.

The surprising note to this film is it’s dedication to faith underneath it’s crude exterior. Bobby exclaims many times in no uncertain terms, “God knows me, and I know God!” When asked what will happen if they loose their home, Bobby says with complete confidence, “God wouldn’t let that happen.”

Another character is revered for being Born Again. Lawson asks Bobby if he thinks they will be together in Heaven, wanting to be with his friend even after death. Bobby is also confident in the fact that God is in control as he says to Pursy, “God and Lorraine brought you here for a reason.” At a graduation celebration for Pursy, Bobby gives a beautiful tribute to Pursy and the crowd of friends gathered there with a heartfelt, “Today is a good day to count our blessings!”

In the end Bobby gently utters, “I am most thankful to God whom I thought had given up on me.” How many of us can say that with humble servitude to the God of all creation who picked us out of a life of sin to be His? There are so many who have made their lives a shambles without holding onto God’s Hand. No wonder the Host of Heaven rejoice when just one is redeemed.

“A Love Song For Bobby Long” is a testament to those who are invisible. Those whom none of us want to consider or be around. Those who have hit bottom and to the world are considered a disgrace. Those whom our Lord and Savior chose to eat with, live with, and even in our current days will never ever give up on.

Positive—This movie, while it addresses downright lying and a lot of drunkeness, was a wonderful story of a family in crisis that didn’t even know. The language is strong, but John Travolta cleverly plays Bobby Long, a washed up drunken college professor in New Orleans. He lost his job and his family after tragedy. As a Christian, you want to take Bobby in your arms and hug him and then slap him and then take him to church. While the story does not take him to church, one song and one letter lead Bobby down a new road—one of wanting to love again and wanting to live again. An overall wonderful movie that pulls at your heart strings, making you laugh and cry.
My Ratings: [Offensive/4½]

Ray Bennett, The Hollywood Reporter
…one of those slow-baked Southern character studies about taking an old flat tire of a man and finding some way to love him anyway…

Peter Debruge, Premiere magazine
…a poky dawdle of a Southern-style indie that would pass without notice but for John Travolta and Scarlett Johansson, who answered the siren call of regional color…