Breakin' All the Rules

for sexual material/humor and language 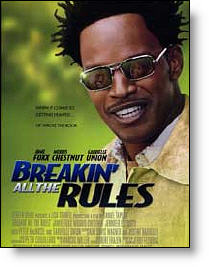 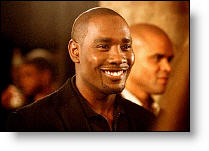 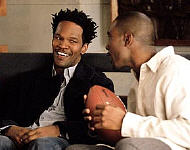 Here’s what the distributor says about their film: “A film about a man who, after being unceremoniously dumped by his fiancée, pens a “how to” book on breaking up and becomes a best-selling author on the subject. Not wanting his male friends to suffer the same fate, he gives them advice on dumping their mates. What ensues is a “hilarious” comedy of errors.”

“Breakin’ All the Rules” does show a thread of the art of breaking-up in relationships woven throughout this film, more importantly though; it has everything to do with love. The lives of six main characters are intertwined using deception and manipulation as tools in the dating game. The winner’s success depends mostly on if he/she can outwit the other and strike first before being sideswiped with the infamous line, “We need to talk.”

Quincy “Q” Watson is portrayed by Jamie Foxx a comedian from “In Living Color” who delivers the same freshness that made it a must see back-in-the-day. He is a respected editor for a magazine with hopes of engagement to his model girlfriend Helen (Bianca Lawson).

Philip (Peter MacNicol), Quincy’s boss of Spoil Magazine, requests his guidance in the terminating of employees. The basis for this reasoning is that Quincy studied psychology for a year at Berkeley—hence, making him the expert after having fired the human resource person. Since Philip lacks the backbone, but is strong in delegating, he informs Quincy of his new assignment. Quincy is instructed to write procedures and guidelines in handling the delicate matter of terminating since the company’s downsize is in the works.

Unfortunately, the announcement and celebration of Quincy and Helen’s engagement with friends at a local club goes sour. Helen explains her need for grand passion and romantic gestures. She further tells him of her intentions to fly to Paris with another man. Typical of Jamie Foxx’s style, Quincy did not take this lightly by making several attempts to enlighten her with such comments as, “Have you been smokin’? You’re an alien!”

The following day, Philip confronts the distraught Quincy for the completed assignment with further instructions of personally doing the firing from a list of printed names. Although Quincy’s diligence did motivate him to acquire many books and materials to research, he was not quite ready for the reality of it. He failed miserably at firing the first person—then writes his name at the top of the list and walks out.

Quincy finds himself wallowing in and expressing his disgust over Helen’s method and technique of dumping him through numerous letters. Furthermore, he reflects on the terminating process and strikes gold. If he and Helen had the employee-boss relationship, she had fired him horribly in every possible way—public humiliation, conflicting emotional messages, and horrific timing. Fortunately, with the assistance of his cousin, Evan Fields (Morris Chestnut) who clearly sees the potential of the manual on the science of breaking-up for a “how to” publication by Spoil Magazine.

There are rap songs played throughout the movie with some hard-core lyrics and other lyrics that are not easily detected. Cussing is very evident. An introduction of a dirty old white man who requests bluntly that Nicky (Gabrielle Union), Evan’s girlfriend, touch his private parts—this gesture is exhibited. There is a disturbing scene where Nicky tells all to Quincy, revealing her secret fantasy while she caresses her neck and breasts.

As the storyline progresses there is a whirlwind of love gone wrong. Many of the couples that started out together end up with a more suitable partner. Throughout this film, some people are trying to face their fear of breaking up, while others are trying to reconnect. Pure and genuine love is certainly not demonstrated, and unfortunately, the ingredient of lust and sex runs rampant.

Love is a precious gift and when shared in purity, it can be the single most rewarding experience!

1 Corinthians 13:4-7 “Love is patient and kind. Love is not jealous or boastful or proud or rude. Love does not demand its own way. Love is not irritable, and it keeps no record of when it has been wronged. It is never glad about injustice but rejoices whenever the truth wins out. Love never gives up, never loses faith, is always hopeful, and endures through every circumstance.”

Comments from young people
Neutral—Overall, this movie contain points of humor, which I found both good and bad. There are references to sex, and at the beginning of the movie Quincy is living with his soon to be wife. I did enjoy the movie, but if you do choose to spend your money on it while its in theaters, I would recommend going to the cheaper showing. It was a average romantic comedy.
My Ratings: [Average/2½]

Kaylee Bailey, age 15
Movie Critics
…The relationships in this film seem scripted for disaster. Based on qualities like dishonesty, manipulation and mere sexual gratification, it’s a wonder any of them last as long they do…

Kerry Bennett, Grading the Movies
…isn’t exactly a good movie, but it turns out not to be bad, either…

Mark Caro, Chicago Tribune
…so determined to cross the finish line in 85 minutes that it doesn’t pause for logic or psychological sense…