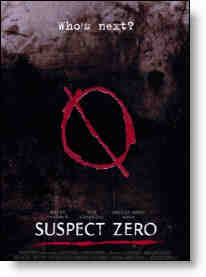 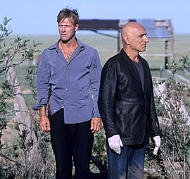 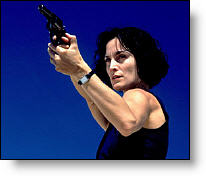 Here’s what the distributor says about their film: “FBI Agent Thomas Mackelway (Aaron Eckhart) gets called in to investigate a strange murder. When the trail leads him to the suspect (Ben Kingsley), he realizes that he has been drawn into a psychological labyrinth that turns what is expected upside down.”

How are serial killers usually found and caught? They have a pattern or modus operandi (MO) that police and the FBI use as clues to uncover the killer. The movie world has an MO as well when it comes to serial killer mystery movies. They have a wickedly intelligent and creative villain who baits particularly vulnerable FBI agents with tantalizing clues. In the end the FBI gets their man, but at a cost. Suspect Zero in many ways feels like it is following this MO, but outstanding acting and artistic camera work as well as haunting musical themes elevate this film towards the top of the genre.

Who is Benjamin O’Ryan? FBI agents Thomas Mackelway (Aaron Eckhart—“Paycheck”) and Fran Kulok (Carrie-Anne Moss—The Matrix) attempt to unravel the enigma of a series of murders and disappearances revolving around the character of Benjamin O’Ryan, played with unbelievable skill and gruesome intensity by Ben Kingsley (“House of Sand and Fog”). In recent years, Kingsley has proven to be one of the most intense and believable actors in all of Hollywood. Every facial twitch or eye gleam communicates a depth of character rarely achieved by others within his craft.

The movie opens with Kingsley confronting a seemingly innocuous traveling salesmen in a roadside diner. When a murder occurs and clues are left, we are reminded of the 1995 movie “Se7en.” In fact, there are several places within the movie where homage is made to “Se7en,” including a subtle musical score during one scene where Eckhart’s character is searching for clues. What in fact does the circle with a line through it mean? Is it cryptic or simple? Is there a pattern after all, and can the agents solve the mystery before another life is taken?

Agents Mackelway and Kulok have some kind of history together from their service in Dallas. Mackelway was put on administrative leave and shipped off to Albuquerque for failure to follow procedure on a previous serial killing case. The killer this time however, tracks down Mackelway and sends him an endless stream of MISSING faxes. The agent is also burdened with nightmares that seem to be related to the cases on which he is working, but in the end only give him headaches. He knows that the clues are there and he is guided to “see” what is there. Both Moss and Eckhart are good in their roles and bring a sense of reality to the sometime over-the-top nature of the script.

We discover that the FBI often uses what could be called “psychics” to uncover clues about crimes. This poses an interesting question. If there is such a thing as psychics who can see crimes and give clues to investigators so they can solve the mysteries, from where would such a power come? It would seem the power is used for good and to bring about justice, but does that in any way mean that it comes from God? Is it possible for darker forces to “gift” individuals with such a power, and if so why would it be used for good? (See Ephesians 6:10-18, 1 Corinthians 12:7-11 for reference.) Scripture tells us that Satan often appears as an angel of light (2 Corinthians 11:14). Perhaps that manifestation in psychics to solve crimes (if true) can be used to intrigue and introduce more people into the world of the occult.

In the movie-world however, these powers are generally a plot point from which the writer can introduce twists and turns that would most likely not normally happen in the real world. To discuss the plot much further would be, in my opinion, giving away too many of the movie’s secrets. This is the kind of movie that is more interesting and surprising when you walk into the theatre knowing little or nothing about the plot.

There are many disturbing and graphic images throughout this film. It also contains about ten usages of 4-letter words and the Lord’s name is taken in vain on two occasions. There is a scene depicting a rape and brief female nudity. The overall tone of the picture is dark and heavy, with very few moments of relief. Thus, it is a tense hour and 40 minutes.

The movie engages and interests, and on some level then entertains. The acting is excellent, especially Kingsley. But in the end, it somehow feels extra good to walk outside into the sunlight once the movie is over.

Kirk Honeycutt, The Hollywood Reporter
…There may be wackos on the loose, but whatever’s happening in the cutting room of this movie seems just as crazy…

Wesley Morris, Boston Globe
…too devised and elaborate to really engage us…

Roger Ebert, Chicago Sun-Times
…Fortunately for you, I saw it, so you don’t have to. And trust me, you don’t want to…