for crude and sexual humor, language and some drug content 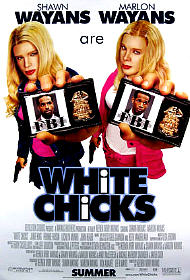 There have been in the history of cinema about 75 films in the category of gender-disguise. The most recent was “Connie and Carla.” There have been some notable releases in this genre. Most people will remember movies like “Tootsie,” “Mrs. Doubtfire” and “Victor/Victoria.” Our children were introduced to this plot theme in the Disney release “Mulan.” Somewhere, there is hidden in a dark and mindless studio boardroom a dartboard. There is on this large dartboard square pieces of paper with plot points on them. Studio executives toss a dart at the board and that determines the substance of the next film. Maybe there is a deck of “plot-point” cards and they say, “Pick a card, any card.” I hope you know that I am kidding, but “White Chicks” is almost as mindless. It is not even a good “undercover” story or “FBI” plot.

Let’s just cut to the chase. It is a terrible comedy that most viewers will be convinced that the MPAA review team was given Sominex just before the screening began. The other surprise is that during the early years of cinema it was often considered a racial slur if a black actor put on a white face. We now have black actors Marlon and Shawn Wayans wearing whiteface make up for most of the film. I wonder if white actors like Adam Sandler or Jack Black could have gotten away with pretending to be black women. I guess you could say that this film is a real “drag” (pun intended).

The whole idea appeared to be doomed from the beginning. Marlon and Shawn Wayan wrote the script and their brother Keenan Ivory Wayan directed this comedic effort. It is no disguise that the three are trying to poke fun at the famous Hilton sisters. The lack of cleverness continues with a lame attempt at choosing a last name for the spoiled heiress like Wilson.

Here is a brief run down of this typical check-your-brain at the door comedy. The Wayans brothers play a pair of overzealous FBI agents (who also just happen to be the Copeland brothers.yes that rhymes with Wayan) whose last sting operation goes very awry at the film’s start. On thin ice with the agency, they’re assigned to protect the snobby Wilson sisters from a possible kidnap attempt during a long weekend in the Hamptons of Long Island. (Does the FBI really do this sort of thing?) But when the real Wilson sisters are incapacitated, Marcus (Marlon) and Kevin (Shawn) are pressed to fill their high heels, putting on whiteface makeup and dressing as women.

I imagine that someone could build a comedy over this type of desperate situation. It certainly worked for Bing Crosby and Danny Kaye in the classic “White Christmas.”

The problem is that much of the humor goes straight for the toilet. We are told early in the story that Marcus is lactose intolerant. He gets a serious problem with gas as a result. You know right away that he will accidentally consume some dairy and the audience is then forced to listen to each noisy encounter. This theme goes on way too long. It is one of those plot points that should have been flushed or at least presented in a more imaginative way like the villain in the “Master of Disguise.”

The film reaches desperately for more humor by placing these unlikely girls in a slumber party and trip down the fashion runway. The funniest scene in the film is the two girls break dancing in a ballroom. It is hilarious, but the Wayans go right back to the toilet and vomit.

“White Chicks” does contain enough objectionable content that will give both parents and Christians pause before viewing. There is a strong theme of alcohol use and references to drugs. I have seen every 2004 release and Hollywood seems to be intent on pushing the envelop in this area. I know that many movies are subsidized by both the tobacco and alcohol industry. You should also know that there is an abundance of sexual slang included in the dialog. This does not begin to include the obscenities that are peppered through out this dismal release.

There are several sexual references and women in revealing clothing. Very little of the humor is presented in good taste. Yes, the Sominex cocktail at the MPAA screening was very effective, and we continue to scratch our heads and say, “how did that get a PG-13 rating.” You could say that “White Chicks” is an R-rated film disguised as PG-13. That is the biggest “drag” of all.

My strong recommendation is to skip this one and don’t waste your “gas” (pun intended) going to the theater. This film is as uncomfortable to watch as sitting next to a man dressed like a woman on a bus. The Wayans tried to make a one-joke comedy and it failed. The story might work for a 30-minute network comedy, but not a full-length feature film.

EDITOR’S NOTE: The DVDs of this film were released for retail sales/rentals on October 26, 2004. There are TWO available DVD versions of “White Chicks.” One is the theatrical release version (rated PG-13) (reviewed here). The other is an unrated, “uncut” version which has more objectional material than is covered in this review.

Comments below:
Positive
Positive—I felt that I walked away with something fresh after seeing this movie. The acting was done quite well, and the plot is something that you don’t see every day. While there was a touch of negative aspects to this film, I find that it was morally acceptable for me to watch. Watching it with several members of my congregation, we all had to agree that while not the best movie was had seen in a while, the time and money that was spent was well worth it. I was motivated by it, enjoyed every bit of the humor and witty acting, and I would highly recommend anybody to see this movie.
My Ratings: [Better than Average/5]

Rev. Durden, age 44
Negative
Negative—This film was a great disappointment. The amount of profanity and sexual comedy was overwhelming. I watched the film in its entirety, but truly wished I had left early. The offensive material far outweighed any comedy I could find in the film. I would not recommend this film to anyone! And children definitely should not see this film. The behaviors displayed in this film are not a good role model for any Christian teen.
My Ratings: [Very Offensive/2]

Jaime Swaffar, age 27
Comments from young people
Negative—This film was nasty… there were some jokes that had to do with sex and people that were lesbian …offensive comedy! …don’t waste $7.00 on this FILM!
My Ratings: [Very Offensive/1½]

Jamie Souder, age 14
Negative—I did not like the film I would not recommend it to any one.
My Ratings: [Extremely Offensive/1]

Nick Thompson, age 11
Negative—It was an unacceptable movie. There was a ton of language. The movie had sexual references to females, and it was a terrible movie overall. Don’t waste your cash…
My Ratings: [Very Offensive/3½]

Scooter, age 12
Positive—This movie was extremely funny. The whole theater was on the edge of their seat because they couldn’t stay in their seats. But although this movie was funny it is not a movie would want kids to see. The violence was minimal but the language and sexual content was heavy. So consider wisely about taking your children.
My Ratings: [Very Offensive/4½]

David Hermann, age 14
Positive—This was a good film, I enjoyed it and so did my parents. I thought it would be a lot worse than it was. I was afraid to see it with my parents, because I thought it would have a lot of crude humor, but it didn’t!!
My Ratings: [Better than Average/3½]