for language, some graphic nudity and brief drug use 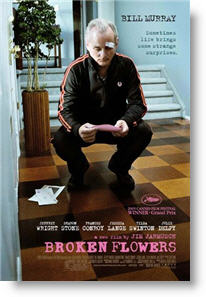 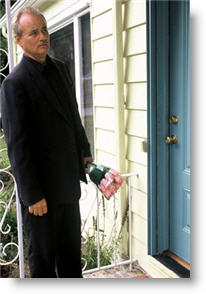 Here’s what the distributor says about their film: “The resolutely single Don Johnson has just been dumped by his latest lover, Sherry. Don yet again resigns himself to being alone and left to his own devices. Instead, he is compelled to reflect on his past when he receives by mail a mysterious pink letter. It is from an anonymous former lover and informs him that he has a 19-year-old son who may now be looking for his father. Don is urged to investigate this “mystery” by his closest friend and neighbor, Winston, an amateur sleuth and family man. Hesitant to travel at all, Don nonetheless embarks on a cross-country trek in search of clues from four former flames. Unannounced visits to each of these unique women hold new surprises for Don as he haphazardly confronts both his past and, consequently, his present.”

While it seems that flowers are more likely to wilt than to break, the idea that the new Jim Jarmusch film shows is the fragility of one of the most important things in life: relationships. “Broken Flowers” is an artistic, fictional tale exploring one man’s confrontation with his past—revisiting those he once knew intimately, while in search of a child he has never met.

Don Johnston (Bill Murray) receives an unsigned letter from a former girlfriend telling him he has a nineteen-year-old son he was never told about. While his current girlfriend, Sherry (Julie Delpy), is in the midst of leaving him, this “Don Juan” bachelor gets some counsel from his mystery novel-loving neighbor Winston (Jeffrey Wright) to go and find his newly realized off-spring. After Winston assembles the vital stats on the former ladies who could have sent him this anonymous letter, Don reluctantly ventures out to visit them all and find out which one is the mother.

There is some objectionable content throughout the course of this movie, mainly dealing with foul language and nudity. The f-word is used various times and one scene entails a young girl appearing completely nude. Another scene also implies that Don and one of his former flames sleep together. Don has clearly led a promiscuous lifestyle, but this story does not glamorize the choices he has made.

One of the most admirable aspects to Jim Jarmusch’s films is the lack of pretentious filmmaking. Jarmusch is very deliberate and focuses on the things that are most important, namely story and character. While Broken Flowers is a somewhat simple production, Jarmusch has spared no expense in finding the best talent to tell this tale. He even uses Julie Delpy and Chloë Sevigny for just minor parts, but their appearances are in no wise throwaway. They make even their brief moments something meaningful and poignant.

The tone of this story is serious overall and deals with a lot of pathos. Perhaps because the sadness is so strong, it was easy to play against it and create lots of humor throughout. Bill Murray’s deadpan expression helps with this. Overall, it is a drama and leaves you feeling more reflective at the end, but it also provides many moments for you to laugh out loud.

“Broken Flowers” is independent filmmaking at its finest. It is an interesting story with well-written, thought-out characters. It isn’t perfect, but if you are looking for something a little different, this could be worth your while.

Comments below:
Positive
Positive—I loved this film. …I really sensed the desperation in the Bill Murray character. I get the feeling that, through his whole life, he’s been hiding his true emotions behind an attitude of disinterest. He always has the same expression on his face, never shows what he is really feeling, and tries to make it seem as though he’s just waltzing through life. This search for his son is a good example. He goes through the movie, constantly saying that this is a stupid quest, and he doesn’t want to do it anymore. Yet, he never actually stops. He has grown old and alone, and, through this letter, he finds what might be his last chance for an actual human connection.

As the movie goes on, and he’s faced over and over again with the stupid, wrong choices he’s made, he gets more exhausted, but he also grows more desperate to meet his son. The whole movie leads to the climactic scene, where Don finally throws off all of his pretensions and makes a mad dash towards human contact. But, unfortunately, it eludes him, and he stands there, alone. We almost feel like his situation is hopeless, but are given a slight glimmer of hope. No matter what choices you’ve made, it’s never too late. It’s a good message for Christians and non-Christians alike.
My Ratings: Offensive / 4

Tyler Smith, age 24
Positive—I appreciate independent films—their originality and relatively more substantive plots. And I like Bill Murray in serious roles. He is very effective and touching in this one, as he was in “Lost in Translation”. I found “Broken Flowers” quite entertaining, though I was disappointed in that ridiculous scene with frontal nudity. No Christian themes. An entirely secular point of view on absolutely everything. I give it four stars for the excellent acting. It was interesting, in a contemplative kind of way.
My Ratings: Offensive/4

Halyna Barannik, age 59
Positive—This is one of the best films of 2005! Bill Murray gives another Oscar-worthy performance here. I don’t understand why they just don’t go ahead and give this man the Oscar. He’s brilliant. This is one of his best films to date. “Lost in Translation” was flawless, and this one is too. Jim Jarmusch is a very talented director whose originality never ceases to amaze me. Bill Murray, along with Sharon Stone, Jessica Lange, and Tilda Swinton, seem to be right at home with this material. Bill Murray has shown that he has a knack for character studies, and I hope he continues to take on more projects like this one. He’s perfect as the aging womanizer in this film. Everyone in the cast does an excellent job! Jeffrey Wright plays Bill Murray’s best friend, and he’s also great. You’ve simply got to see this film. The ending is not going to sit well with people who aren’t used to this type of film. This is not a mainstream film. The director doesn’t spoon feed his audience any answers. It doesn’t have a conventional ending. It doesn’t provide any easy answers. This is one film that breaks free from the formula, and it pays off. The more I see certain filmmakers break all of the cliched rules of cinema, the more excited I get!

The only thing that could be defined as objectionable would be a scene of pretty graphic nudity, in that it shows bare breasts and full frontal nudity. It doesn’t last long though, and it’s actually kind of pointless. Other than that, this film was flawless! I heard about three curse words throughout the entire film, so you won’t have to worry about hearing the “F-bomb” every five seconds!…
My Ratings: Offensive / 5

Adam, age 23
Negative
Negative—The quality of the filmmaking is very high! BUT!!! This movie has nothing to do with being “comedy” or entertaining; I would say, I was laughing not because of the story, but because of the fact that I’m watching this movie, with it’s boring story, and silent moments which have nothing to tell. You just wait and think that something will happen, and it’s just the “quite” sad face of Don; you don’t know what’s going on his mind; you don’t know when will he start to speak; you just think that: Oh now, something will happen and the movie will start being funny or actionate a little… just boring story of someone who is looking for the mother of his child, if any, and when he even almost discovered that there is no child, and it’s all just a trick, he is still thinking that he has a son, from unknown woman. IF you have free time, watch it, then comment, but if you are really bored, don’t pick this movie; spend time and money in something that cherishes your heart, that makes you really laugh, because a cheerful heart lives longer than a fearful feeling or pressing movie experiencing heart!
My Ratings: Offensive / 4

Yousef in Israel, age 26
Movie Critics
…Murray has the uncanny ability to invite us into his performance, into his stillness and sadness. I don’t know how he does it. [4 stars]…

L.A. Weekly, Scott Foundas
…a movie of uncommon sweetness and delight… The joy is in the journey…[A]

Entertainment Weekly, Lisa Schwarzbaum
…Beautifully photographed… a combination of the patented Jarmusch touch and a cast headed by a droll Murray make it more than well-worth seeing…