for strong language throughout, violent situations and some drug references 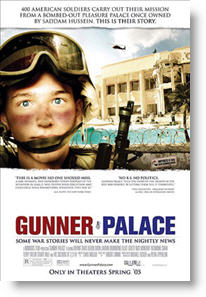 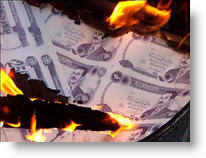 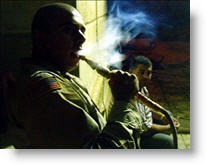 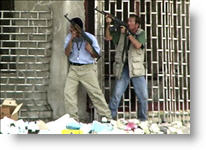 What is the Christian perspective on war? Answer

Some war stories will never make the nightly news.

Here’s what the distributor says about their film: “The United States Army’s 2/3 Field Artillery unit—a.k.a. the Gunner Battalion—is based in the late Uday Hussein’s Al Azimiya Palace in Adhamiya, the most volatile area of Baghdad. Filmmakers document the most recent invasion of Iraq to hear the voices of the men and women serving in this war and witness the daily danger and drudgery they must endure.”

Following in the video-making footsteps of Michael Moore’s high-powered infomercial, Fahrenheit 9/11, Gunner Palace uses the same “hit and run” technique in trying to inform us about events of the war in Iraq. The audience is “hit” with limited information and left to make only specified conclusions about it. Then the documentary makes a “run” to another random scenario and subjects the audience to the same kind of treatment. The subject matter for Gunner Palace is important but, unfortunately, this documentary will not give you a fighting chance to think for yourself.

Gunner Palace refers to a Middle Eastern mansion built by Saddam Hussein during his reign, but was bombed after the invasion and now inhabited by U.S. troops. This luxurious facility is much like a resort in many respects, and several of the segments show the U.S. military enjoying it to its fullest, including swimming, golfing, fishing, and even acting like they’re partying at a rock concert by referring to it as “Gunnerpalooza.” Other aspects of the documentary include events such as house raids, patrolling streets in Baghdad, arresting suspects, training Iraqi soldiers, and interviewing a handful of young soldiers barely out of high school. The entire account is a smattering of unconnected, isolated incidents which force you to make one opinion about an entire war.

While the backdrop for this documentary is war, violence is not directly part of the subject matter. Instead, the reason for the R rating is due to foul language—mainly the f-word being used over and over at various times. It is not in every scene at every moment, but does occur, for example, when some of the soldiers rap about the war. These segments can be very abrasive. There are also a couple of lewd sexual references made in at least one other scene. Some advertisements have indicated this movie is rated PG-13, but the R rating is more appropriate.

Throughout most of the documentary there is a voice over narration. The voice over is usually heard describing situations, providing additional information (which is usually unconfirmed by any additional footage), and asking questions of some of the soldiers. Unlike Michael Moore, the voice over narration is much more toned down, but this subtle voice is still just as sardonic. The voice is informative (granted you are willing to believe he is telling you the truth) and more often than not comes across as being very pretentious.

During one house raid, U.S. troops arrest men who were reportedly involved in making bombs. The voice over scornfully notes that while there was no evidence of bomb making found, the men were still put in prison. Other than showing long segments of how these suspected bomb makers are being inconvenienced, no other footage or information is given throughout the rest of the movie. Just because the troops didn’t find anything at that particular moment, does not mean that these men aren’t guilty. But whether or not these men are guilty or innocent is never followed up with or confirmed.

The point this movie seems to be making is that the U.S. troops are really like terrorists. Most of the footage for the house raids or the street patrolling only shows certain moments, such as escorting an elderly woman and a young girl down the stairs during a raid, or questioning a young boy on the streets who is strung out on drugs. While there are no Abu Grahib-like abuse moments, the implication could still be the same. These moments are one part of an entire operation, and the other moments (that are just as valid) seem to be purposefully withheld. They only give you one option for a conclusion.

The biggest criticism being made seems to be focused on the character of the individual soldiers. Most all of the troops they interview are young (some just out of high school) and are usually the lowest ranking officers. We are supposed to base how things are going only on their opinion. On top of that (besides some edited interviews with them) a lot of the candid shots of the troops show them in situations wildly unrelated to the war, such as trying to deal with a rat problem in one of their barracks.

If you got your fill of biased ideas from Michael Moore, you may not have any appetite left for this kind of heavy-handed argument. It might have been at least informative, but most of the facts seem so skewed that it’s not even helpful in that respect.

Negative—Although subtle, from the outset, this movie seems to present the film makers political agenda more than a real documentary. The viewer must endure vulgar rap lyrics and gutter profanity in the name of objectivity. Our soldiers never seem to find the bad guys on film. Soldiers are presented as reluctant policemen hated and laughed at by the locals. I cannot recommend this movie to anyone. My Ratings: [Very Offensive/2

Tom Jeffries, age 59
Positive—…“Gunner Palace” gets it right, and any Christian who really cares about addressing the sins of our nation should embrace it and stand up for peace immediately.
My Ratings: Better than Average/5

Carl Werner, age 50
Negative—Slivers and vignettes of the situation in Iraq only serve to promote the directors negative view of the war; a view he brought to the table, a view he had before he went to Iraq. With a axe to grind, he chooses only those scenes which will make the case that the US of A is a bad nation, and the young soldiers are all ignorant idiots. …How can a Christian, led by the Spirit, and having the discerning ability of what is right and wrong and true and untrue, come to any conclusion other than this film is biased and attempts to tear down a noble cause. Christians who like this film have lost sight of us being edifiers of people, and that we see the good when others are cynical.
My Ratings: Very Offensive/2

David Serry, age 51
Movie Critics
…The directors alternately view the troops as either blunderers or victims… The directors of this documentary about our troops in Baghdad tell us more about their own views than the soldiers’…

Kyle Smith, New York Post
…In the end, you only get flashes of these people and not much of a storyline. But even delivered in this basic point-and-shoot fashion, it makes for compelling viewing.