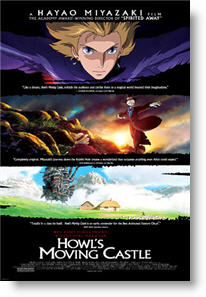 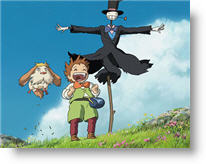 What is the occult?

What does the Bible say about the occult?

Adventures in the rainforest! Learn about the Creator of the universe by exploring His marvelous creation. Fun for the whole family with games, activities, stories, answers to childrens’ questions, color pages, and more! A popular Christian education and evangelism resource. One of the Web’s first and most popular Christian Web sites for children. Nonprofit, evangelical, nondenominational.

Here’s what the distributor says about their film: “Sophie, an average teenage girl working in a hat shop, finds her life thrown into turmoil when she is literally swept off her feet by a handsome-but-mysterious wizard named Howl, and is subsequently turned into a 90-year old woman by the vain and conniving Wicked Witch of the Waste. Embarking on an incredible odyssey to lift the curse, she finds refuge in Howl’s magical moving castle where she becomes acquainted with Markl, Howl’s apprentice, and a hot-headed fire demon named Calcifer. Sophie’s love and support comes to have a major impact on Howl, who flies in the face of orders from the palace to become a pawn of war and instead risks his life to help bring peace to the kingdom.”

Positive
Positive—By far one of the best movies comming out this summer!! For anyone who was a fan of “Spirited Away” your sure to love this film. Its a perfect mix of eye popping imagry and sutle grace of human nature captured in true artistic briliance. While it is a artistic step back from his previous work, I found this film much more fun to watch and made the change over from Japan to north america really well. Only one near the end did it ever start to feel a bit cluncky.

Morally, I think it actualy did better then the previous film. I don’t remeber any foul language. For sexual content, the worst moment comes near the begingin when what is two older soldiers try hitting on our young heroin. Its a bit disturbing and sexual perverse when one thinks about it, however it could easily go over younger movie watchers just what the two soldiers really wanted, and the heroin is saved after enduring a few minutes of thier banter. The rest of the movie is sexual clean.

All our main characters practice a level of total non violence. However, their is a war going on in the backdrop of the story. The film is never grapic in its depection. In fact, it dosent show us anything really. But through implied reason we could surmize that large numbers of people are dying. Plus, this “Implied reason” can be a bit intense at times.

The movie’s main fault, however, when it comes to moral issues is depiction of magic and demons. While this film contained no “gods” like some of the previous work often did, a number of main characters use magical easily and often. As well one of our main heroic characters is a fire demon. We get lines such as “well if you’re a demon then you must be a good demon”

While nothing is intentional offensive, for some viewers this ideology could cloud some biblical truths. For all these faults, though don’t think that the film contains any lack of positive messages. At its heart, it’s about peace, family, love, courage, and resposibility. I especialy loved some of the smaller moments of just hanging out the laundry. These moments in which our heroes simly get to rest and relax and display the strong bonds that have grown between them.

A highly uplifting film, with enough powerful visual eye candy to keep your jaw on the floor the entire time! If only more people would see this film!
My Ratings: Offensive/5

Ian C, age 19
Positive—This could very well become the “must see” animation movie of 2005. Anyone whose seen “Spitited Away” or any other movie Studio Ghibli has produced will know what to expect. The animation is breathtaking, while the plot pushes the border of the imagination, creating worlds that you wouldn’t expect.
My Ratings: Average/5

Jj Walden, age 19
Positive—“Howl’s Moving Castle” has a lot of principles that are in line with Biblical, Orthodox Christianity. Sophie, the main character of the movie was turned into a 90 year old women. However, this did not stop Howl from loving her as she is. 1 Samuel 16:7 and 1 Timothy 2:9 says that a woman is judged Godly by her works and rather than looks. There is very little offensive content in the movie.
My Ratings: Moral rating: Better than Average / Moviemaking quality: 4

Darius, age 22 (USA)
Comments from young people
Positive—One of the better movies made by Studio Ghibli. Anyone that has seen “Spirited Away” or “Princess Mononoke” knows what kind of thing to expect in concern to spirits and things of that nature. A very fun and entertaining movie. Well worth anyone’s money.
My Ratings: Average/4

Daniel Robison, age 16
Positive—I love Hayao Miyazaki’s movies and “Howl’s Moving Castle” is no exception! I thought the plot line was a little confusing when I first saw it, then I started realizing that Kalcifer had swallowed Howl’s heart that one terrible night when everything was started. I loved Sophie, and I love Christian Bale as Howl and Josh Hutcherson as the little apprentice boy.

I did not mind the witch terms because I watch Harry Potter from time to time. I did not take it to offensively, it only mentions magic a few times even though Howl does play as 3 magicians because of the doors that change colors that go into different worlds/towns.

They have some great bonus features on the DVD if you get lucky enough to get your hands on it. I found it the other day at a Target. I would try there. If not, check it out from a library.

Definitely one to see with he kids, talk to them afterwards though that magic is not good and not to take any of it to heart. Other than that… Definitely a winner!! We salute you Hayao Miyazaki! Keep em’ coming!
My Ratings: Moral rating: Excellent! / Moviemaking quality: 5

Hannah Peters, age 12 (USA)
Movie Critics
…a great animated feature-and one made, obviously, as much for older audiences as very young ones… realized with such an astonishing mix of humor, imagination and visual grandeur that a lot of it takes your breath away…

Michael Wilmington, Chicago Tribune
…Though it’s difficult to work out what’s going on, it’s never boring… It’s set in a fictional city in which magic, witches and sorcerers co-exist with average citizens…

Richard James Havis, The Hollywood Reporter
…long and confusing. …Alternately enchanting and mystifying… its story takes place in a universe that seems unbounded by rules, so much so that whole stretches make almost no sense…

Robert Denerstein, Rocky Mountain News
…Miyazaki’s engaging touch for the surreal counterpoints the film’s antiwar message nicely. Add in the sheer imaginative power of the visuals, and you have what may well be an instant classic…