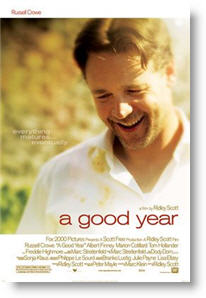 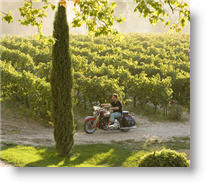 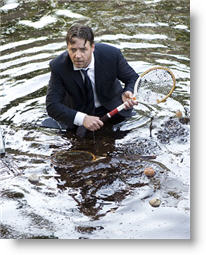 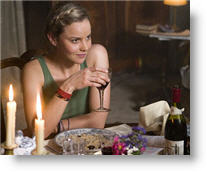 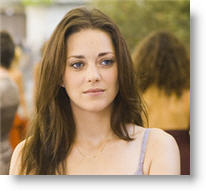 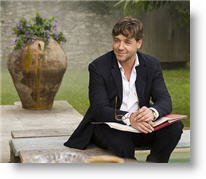 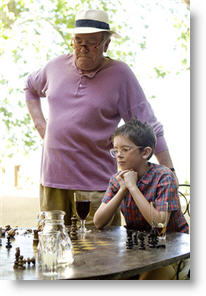 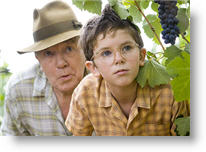 Somewhere around the twenty minute mark of “A Good Year”—when investment broker Max Skinner (Russell Crowe) lands in a drained swimming pool lined with fertilizer, repeatedly tries to jump out, only to fall back into the muck, and is taunted by the beautiful woman that has taken an instant dislike to him—I peeked outside the multiplex door to make sure I hadn’t wandered into the new Jim Carrey film by mistake.

I hadn’t. Director Ridley Scott and frequent collaborator Crowe apparently decided to do some slapstick comedy, and, well—here’s a sentence I never thought I would type—Crowe is no Jim Carrey.

“A Good Year” eventually rights itself and turns into a sentimental romance, rather than a farce. Skinner arrives at his vineyard villa with intentions to sell, but he is seduced by ghosts of summers past and visions of vineyards future. His ice-cold business demeanor—Scott never met a blue filter he didn’t like, and his shots of England, look positively arctic—eventually melts in the soft lighting and string music that is apparently omnipresent in France, and he is so much happier and nicer in his childhood stomping-ground that it hardly seems like a spoiler to hint that he appears to be the only one in or watching the last thirty minutes of the film who doesn’t know which life he is going to choose.

Even with—maybe even because of—the midstream change of genre, the film doesn’t quite hold together. Skinner’s character is a little too broadly stereotypical for his eventual moral transformation to have much emotional weight. We are told through dialogue how Skinner feels about his childhood experiences rather than actually feeling those emotions while watching them, and as a result his selfless act towards the end of the film comes across more as ambivalence than maturation.

Still, the film is not without its pleasures. Scott is a master of light and color; “A Good Year” would probably make a passable silent film, allowing the real star, the French countryside, to take center stage. The best sequence is one in which Skinner attempts to hurriedly take pictures of the villa with a camera phone, and Scott’s juxtaposition of these images with his own filming allows us to see the inherent beauty that can neither be suppressed by neglect nor erased by technology. That these images are haphazard and apparently random is supposed to be a comment, one supposes, about the ubiquity of beauty; the land is so pregnant with beauty that one could point a camera in any direction and have a photogenic shot within reach.

It is also a scene that panders to mainstream audiences, because it allows us to feel superior to Max. We have “eyes to see” what is all around him. That the film stacks the deck against the urban, modern, London lifestyle, making Max’s eventual choice a “no brainer” is beside the point. Neither world is portrayed as real enough to allow “A Good Year” to work as drama, to be a serious commentary about a conflict of values or the eventual choice between them.

As far as potential areas of concern for Christian audiences, there is some mild profanity and some crude language. (Heck, in French, even the swear words sound pretty.) There is a coupling between Skinner and his muse—relatively tame by contemporary standards, and Abbie Cornish lounges around the swimming pool in a bikini long enough to get a wicked sunburn. None of these elements are explicit by contemporary standards, but they do illustrate that the values the film eventually champions are those of aesthetic and sensual pleasure over commerce and not those of simplicity and decency over greed.

Even though the dramatic elements don’t work very well, the film is successful at conveying the pleasures of a simpler pace of life amongst an idyllic landscape. Think of it as Scott’s “Letters to an American Tourist”. [Read viewer comments below for other areas of concern in this film.]

Negative—…I went ahead and took a chance with this movie and was very sorry that I did.
I went ahead and watched to the end so I could give a proper review, and it was definitely not worth watching. Yes, the French countryside is beautiful and some of the cinematography is nice to look at but that is it. The story lacks depth and is a bit boring—but that is the good part. The bad—

Compared with the above, the bathing suit scene that the reviewer mentions is nothing, and I figured since it didn’t seem to have a sexual nature about it according to that person, it would be the worst part of the film… in addition, and also less offensive than the three big ones stated above are a sex scene involving the main character, it is brief and not as offensive as most, but I feel should still be mentioned. …I do not recommend period.
My Ratings: Extremely Offensive / 3

Angela, age 28
Negative—Disclaimer: I did not watch this movie in its entirety because I simply had to turn it off. It was that bad. Really. First let me say that I usually consider this web site to be too conservative in its opinions and have often seen movies that I thoroughly enjoyed that were given not-so-great ratings here. This was far from the case with this film. I haven’t seen so much cleavage since I was reading books for nursing mothers. And, yes, there is a pornographic magazine shot that is very clear and plain and extremely disturbing. In fact, I couldn’t decide which was worse… all the cleavage or the bit where the girl hikes up her skirt revealing her naked thigh and buttock… it’s a tough call. The language was utterly atrocious as well. This is a case of a movie being rife with expletives that neither enhance nor illuminate the story line. Finally, this movie was s-l-o-w. I watched it for an hour and kept wondering, “When does the conflict occur? Where is the love interest? When is something going to happen here?” In short, I would never, ever recommend that someone watch this movie. …
My Ratings: Very Offensive / 3