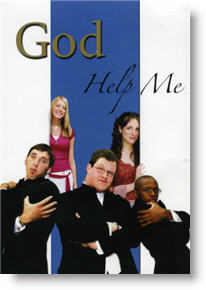 This movie is a comedy about young people falling in love. Jack, Lon Bridget and Ryan are best friends. When Ryan falls for Trudy, the new girl, his friends hash up some schemes to get the two together. But the catch is that Trudy has told the group that she is waiting on God to reveal who she is to marry. Stubborn and unrelenting, Ryan’s friends devise plan after plan to try to get Trudy to see that Ryan is the one. Unfortunately, each plan backfires, and not willing to give up, the group comes up with even more ridiculous plans.

Will Trudy or Ryan get suspicious about the actions of their friends? Will God reveal who Trudy is suppose to marry? This comedy is about relationships and how choosing to play God with someone’s life is not a very smart idea!

“God Help Me” contains no offensive language, nudity, or violence. The way some of the young ladies are dressed in this movie is inappropriate. Tight clothing, strapless gowns, and small blouses are consistantly worn by the actresses. Even though it is a film about young people, it doesn’t mean they have to look like the world. We as Christians are different and live to please God not man. Modesty is an issue that is taken very lightly in our culture. Two of the characters are “dating” and are alone for dates and kiss during the movie. There is one non-offensive kiss after they are married in the movie. In one scene, Bridget pours some sort of medication into Trudy’s soda to make her sick. That is dangerous and something that is not a joking matter.

Considering these young people are in a youth group, they seem to have no idea about what the Word of God says in regards to living their life for God. They mock Trudy because she says she is waiting for God to reveal who she is to marry. They ask if she is a nun, as if waiting on God is only done by those who take an oath of celibacy.

The group talks about “codes” in the Bible that reveal personal information about one’s life, such as who they are going to marry in the future, by simply entering in some information onto a computer. (As if God would do such a thing.)

Jesus answered him, “I spoke openly to the world. I always taught in synagogues, and in the temple, where the Jews always meet. I said nothing in secret.” John 18:20

There was a prayer requested for help in winning a game. Prayer seemed to be taken lightly in this movie, even though the main characters attend prayer meetings. Nobody prayed!!

I thought the acting was weak and the plot dumb. I have seen good Christian movies made with low budgets that had good plots, good characters and great bibilical truths we could all learn from. This was supposed to be a comedy, but I never laughed. The story dragged on and on, making it difficult to keep my attention focused. The characters are supposed to be Christian, but I couldn’t tell by their actions. I do not recommend this movie.

Violence: None / Profanity: None / Sex/Nudity: Minor

Response from the producer

“I am suprised that the reviewer did not understand that it was a spoof. Even Hollywood veteran Jeff Varga understood it was a satire/commentary about the sad state of the Christian subculture. The Bible Codes, everything was a representation of the current state of the Christian subculture and not of our beliefs at all. …we were [not] advocating… the Bible Codes; our intentions were the opposite—the behavior, etc. was all a reflection (accurate, I think) of the self-absorbed Christian culture in America. Anyway, I’m not upset, just wishing they’d have understood that intent of the movie.”

Positive—I think you missed the point of the movie. It was making fun of and pointing out the sad state of the Christian culture in America. It wasn’t promoting belief in the Bible Codes—it was poking fun at it. It was trying to show the current state of the self-absorbed Christian subculture. I thought it was funny, but again I understood what they were trying to say. George Moss, the hip hop artist, is pretty good, you got to admit.
My Ratings: Excellent! / 3

Jay Hays, age 44
Positive—I just received the movie. I was a bit concerned I wouldn’t like it after reading the above review, however, I thought the film was brilliant! I am not a big movie watcher, because of the lack of morality in most of what is produced. This movie was refreshing to watch.

The story did not contain any foul language, there wasn’t any sexuality, and the lack of violence made it a joy to watch. I watched hoping that the message that we shouldn’t play God was clear, and it certainly is very clear. Each attempt of the friends to play God fails miserably, proving to the viewer that it is vain to try. In the end God does show Trudy His plans.

The movie is funny, easy to watch, relaxing, and brings home important messages, for instance the movie shows us the folly in believing in Bible codes, and trying to play God. I highly recommend this film!
My Ratings: Good / 4