for a scene of sexuality 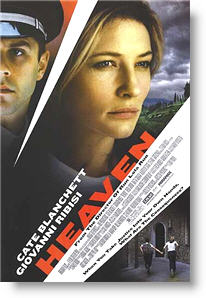 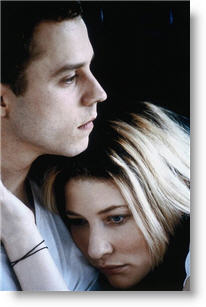 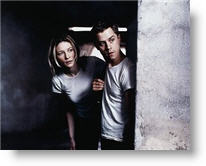 Is Jesus Christ the answer to your questions?

“When you take justice into your own hands, what are the consequences?”

When you come to the end of your rope, and you have tried everything and are at the utter end of desperation, what do you do? What Philippa (Cate Blanchett) does, after months of trying to put a stop to the grip of drugs that has already caused much pain and tragedy in her life and in the school in which she works, is put a bomb in the office of the man who is behind the selling of the drugs (the owner of a large electronics company).

But things go terribly wrong; four innocent people end up dead, and Philippa ends up in jail. There she is ruthlessly interrogated, but as she testifies in English, the police ask young officer Filippo (Giovanni Ribisi) to translate. Filippo sympathizes with Philippa and decides to help her escape. What follows is a journey that they will never forget, as they are pursued by the law and their lives are changed.

Many people don’t quite know what to make of this movie. I am one of those people. However, the movie is a very interesting character study, and from a moral point of view, brings up many questions that are worth discussing. Philippa is filled with great remorse at the deaths of the four people and often expresses her regret, a strong lesson that terrorist violence never pays. And although she is later able to shoot and kill the man she was after, she feels no better for it afterward, another strong lesson that vengeance is not ours, but the Lords. She is also willing, at one point, to turn herself in and accept the consequences of her actions, which is a lesson in responsibility.

Filippo is a young man in search of purpose in his life. The movie subtly hints that he is only a police officer because his father was. He longs to help people, which is a longing we all should have. The risks he takes to do what is right are honorable, if not somewhat misguided. He confesses that he loves Philippa, and I believe that it is his love for her, as well as his search for purpose, that drives home to do what he does.

However, “Heaven” is a far cry from being heavenly. I think it is a great example of what life is without Christs love and forgiveness in our lives. Although we see emotional changes in the characters, we never see spiritual changes. Even though there are many opportunities for the characters to find hope and strength through Christ in seemingly hopeless situations, the only mention of anything spiritual is a brief word about Philipp’s first communion. Their journey is mostly emotional, and the ending leaves the audience feeling unsatisfied and wishing that something more had happened with development of the characters.

“Heaven” is a beautifully shot film, with a hauntingly enchanting score (consisting mostly of a piano and a violin) and heart-breaking acting all around. The film is interesting and does cause one to think about some tough moral issues. In many ways, “Heaven” is a somewhat tamer version of the recent movie “Munich”, addressing many of the same issues, but in a less bombastic manner. But like “Munich”, it is mostly a story about lost, depressed, unhappy people in search of something—and whether they found it in the end is uncertain. But what is certain is that they didn’t find forgiveness and hope in Christ.

Parental warning: the aforementioned violence is off-screen, with the result of the shooting on-screen, but not bloody or gory. Language includes one F-word, one S-word, and a few milder swear words. Most offensive, however, is the completely unnecessary and graphic sex scene between a milkman and his girlfriend, while the two main characters are hiding in the back of the milkmans truck. Premarital sex is also implied between Philippa and Filippo, but nothing is seen except from a great distance and in the shadows.