for mild bullying and brief language 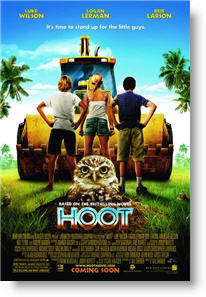 Adventures in the rainforest! Learn about the Creator of the universe by exploring His marvelous creation. Fun for the whole family with games, activities, stories, answers to childrens' questions, color pages, and more! One of the Web’s first and most popular Christian Web sites for children. Nonprofit, evangelical, nondenominational.

“It’s time to stand up for the little guys.”

I went into the theater hoping that “Hoot” would not turn out the way I was pretty sure it would, and sadly, my thoughts were correct. Teenager Roy Eberhardt (Logan Lerman) is forced to move to Florida because of his father’s job, and as always, has to learn to fit in. He quickly finds himself tangled up with two of school kids who most would rather stay away from—a cowardly bully (Eric Phillips), and Beatrice (Brie Larson), a soccer player with an attitude. Also, there’s a strange boy who runs without shoes, seemingly with a purpose, but what?

At the same time, the preparations for putting in a new Mother Paula’s Pancake House are not going particularly well. Someone keeps sabotaging the survey plans, making the local site manager (Tim Blake Nelson) sweat, while he attempts to keep his pushy boss happy. He calls upon a police officer (Luke Wilson) who has a good heart, but can’t do anything right, to crack the case and allow the groundbreaking to begin.

More and more things happen as Roy finds himself joining the whole situation and gaining an understanding of what’s really going on.

It turns out that the location of the pancake house happens to also be a nesting ground for rare burrowing owls, and the running boy (his name turns out to be Mullet Fingers, played by Cody Linley) is doing his best to save them. Only problem is, he’s the one doing the sabotaging; Beatrice is his sister, and now Roy is getting involved in not only trying to save the owls, but to keep himself and the others safe.

In spite of the efforts, the plans are continuing, so Roy turns to their last shot: proving that it’s illegal for the owls to be displaced and killed.

In terms of the actual content of the movie, it’s fairly clean and stays within the limits that PG requires, in my opinion. There’s the bullying, which accounts for most of the rating, some animal violence, some name calling, stuff like that. The worst for sex and nudity is basically people in bathing suits or shorts and no shirt, one of the rare movies that really doesn’t push it much. That I liked, it made for less wincing than usual as I watched.

But on a deeper level I was very disturbed by the message that “Hoot” delivers. The heroes fight evil with evil, and there is little recourse for it. When there was a short father-son talk, I hoped that this would be brought out, but sadly the father did not do a very good job of it. The motives are right, saving the owls is a good cause, but illegal activity to stop people from doing wrong can’t be justified. Only later, when the thought of proving that the Mother Paula’s company is building illegally are they on the right track, but even then their methods are wrong. Parents will need to explain this to young children, and how the Bible teaches about handling difficult situations like this.

I usually judge a movie ultimately by whether I’d like to see it again, and if so, would I be willing to buy it? This is one that won’t bother me a bit if I were to never have it near me again, despite its fairly clean presentation.

Positive—We took our children and their friends (ages 9,11, 11 and a half and 13) to see this film and would definitely recommend it. It was a good movie with very little objectionable material. The bullying scenes were a little intense, but there was NO language (“dang” was the worst we heard) and NO sexual or romantic content at all. Friendship was an important theme, and although there were a couple of instances of dishonesty, it was done as a last resort because the character felt there was no other way—this was resolved in the end. A great respect for nature and preserving and protecting God’s creatures was also a main theme. Good, clean family entertainment—we definitely need more like it!! p.s. I have never read the book that this movie is based on, so I cannot comment on whether it is true and accurate to the book.
My Ratings: Good / 4

Sherry, age 34
Positive—The family and I just watched this movie this week, via rental. I agree with most of the review. I would like to also add an additional troubling piece, in my opinion. The child that ditched the mother and stayed out of school was a bit troubling. Although, I understand why the child would want to leave the home, the movie ended with the idea the child remained out of school. There was never a scene to have him join the local school system or move in with his step-sister or the boys family. It gave the impression, the boy remained alone on his own. Other than that, I will have to say the kids enjoyed it.
My Ratings: Better than Average / 3

Matt Cole, age 35
Comments from young people
Positive—I thought this was a wonderful movie. The bullying was a bit intense but that’s real life. I can understand why some people would be put off by the sabotaging in this movie, and I’m not saying it’s right. But the character had a good reason for it. In the end they did stop them in a not quite so violent way. All together I thought this movie was positive, and I look forward to seeing it again.
My Ratings: Better than Average / 5

Meredith Favorite, age 13
Positive—…How is this movie offensive??” I liked this movie—it was good! It talked about the message of saving the animals, too!
My Ratings: Moral rating: Good / Moviemaking quality: 3½