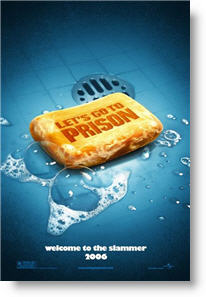 Prison in the Bible

“Welcome to the slammer”

Here’s what the distributor says about their film: “Felon John Lyshitski (Shepard) has figured out the best way to get revenge on the now-dead judge who sent him to jail: watch the official’s obnoxious son, Nelson Biederman IV (Arnett), survive the clink.

John strikes gold when Nelson is wrongly convicted of a crime and sent to the pen he used to call home. He gleefully gets sent back to become Nelson’s cellmate and to ensure that his new buddy gets the “full treatment.” Let the games begin.

Lesson #1: the joint’s a scary place, so you better make friends fast. Right away, Nelson offends the wrong cons and is sold—by John—to Barry (McBride) for prison snuggling. But just as revenge starts tasting sweet, Nelson becomes Big Man in the Big House and turns the tables on John… changing the rules of his insane game.

It’s time to shower with thugs, sip toilet wine and sharpen a shiv as the locked-up are set up in "Let’s Go To Prison," an uncompromising, no-holds-barred comedy directed by Bob Odenkirk ("Mr. Show") and produced by Carsey-Werner Films and Strike Entertainment.”

ScreenIt
…There probably is a funny comedy to be made from the premise of an effete rich guy being sent to a penitentiary. But the juvenile "Let’s Go to Prison" never comes close to locating it. …

Bob Smithouser, Plugged In
Positive—Funny movie all the way… I went to go see this with my wife cause we weren’t in the mood for a horror movie, …we wanted a comedy. …it’s really funny and the references are mild; there’s language, but no nudity, gore, drugs…
My Ratings: Average / 4½