for pervasive strong brutal violence, and for language 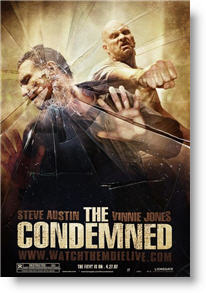 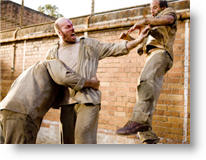 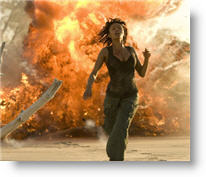 Walking in the footsteps of Hulk Hogan, Dwayne “The Rock” Johnson, Kane and John Cena, another wrestler is trading his knife-edge chops for acting chops on to the big screen. The Texas Rattlesnake, Stone Cold Steve Austin stars in the latest action packed WWE Film project, “The Condemned.” This isn’t the first time Austin starred in a major role. He made frequent visits to Don Johnson’s defunct series, “Nash Bridges”, as the motorcycle riding, bounty hunter Jake Cage, and he also had a small appearance in Adam Sandler’s version of “The Longest Yard.”

This time Austin takes center stage as condemned convict, Jack (Riley) Connor. He and nine other killers from across the globe are thrown on an island to fight to the death, and believe me, this is no Survivor. Each of the participants has a bomb strapped to their ankles giving the contenders a chance to eradicate their opponents by pulling a red strip and activating the bomb. The last survivor of this deadly game gets to be a free man with mucho bucks in his pockets. Thanks to wealthy television producer, Ian Breckel, portrayed by “Matrix Reloaded” and “Matrix Revolution”’s star, Robert Mammone, a person can catch all this murder and mayhem on the internet for fifty dollars and take entertainment to a whole new level.

“The Condemned” is not for the faint of heart. It is a pure adrenaline rush from start to finish. If you’re the type who likes films of, what I call, the “Rambo” caliber, then this movie is for you. Keep in mind, this is a rated R film, which means language was extremely harsh and there was a hard scene that insinuated one of the female felons being raped by another crazed convict and then killed, but you never see the actual act. One other thing to consider was that the violence was at an all time high, but for a movie like this, it had to be.

As for Stone Cold’s portrayal, it wasn’t much of a stretch. The only difference was that in his wrestling persona, he is a loud, obnoxious, beer drinking show off. As Jack Connors, he let his actions speak louder than his words. His tough looks and other facial expressions along with the quiet demeanor of his character made him as good if not better than anything Stallone, Willis, or Schwarzenegger did. In other words, he had the aptitude to do this kind of movie, and I hope they capitalize on this character.

Even with the violence and the language, what impressed me most about the movie was the message it conveyed. The film showed that the entertainment industry should carefully consider its moral obligations of its content and to the people that it is reaching. In the film, the old argument of “it’s the parents responsibility what children watch” is quoted as a cop out. What is ironic is that this message is coming from a movie of this quality. Not only that, the executive producer, Vince McMahon, whose wrestling programs promotes sex and violence up the ying yang, sends out this kind of point in this film.

Could “The Condemned” have been made with a PG-13 rating? Absolutely! The only thing I felt that gave it an R rating was the overuse of the commonly used curse word heard in an R rated movie. The movie was violent, yes, but no more violent than some of the PG-13 films I have seen in the past. Would I recommend this movie? If you’re looking for an all out action slug fest that gets your heart pumping and your pulse racing with a good message to the viewing public, I would emphatically say, yes! Just don’t bring the kiddies so they can see Stone Cold Steve Austin. If you’re looking for a feel good movie with wholesome characters and a wholesome story, stay far away from this movie as you can because Johnny D. said so!

Neutral—This was probably the second best WWE movie yet, behind the Rundown. It was also the most violent. Stone Cold was pretty good in his first leading role, but so far he’s no Dwayne “The Rock” Johnson. Austin if so one dimensional, but I like in this move how he had his famous redneck thug personality, but he also showed a softer side with his girlfriend and helping others. He truly was the hero in this movie. There are many scenes that are hard to watch, and it does have a message behind it too. The moral of the story dealt with how far we go with violence for entertainment, and the consequences of that pleasure and those actions. There was no sex, but there was lot’s of cussing. overall, it was a good film.
My Ratings: Very Offensive / 3

James, age 24
Comments from young people
Neutral—Why did I feel like I was watching hypocrisy on the screen? Because it’s anti-violent message came after (and some during) the violence that for me in two places was hard to watch. The scene where a man supposibly rapes (we are not sure) and murders (that we are sure) a woman in front of her husband and a later scene where the same man murders some of the people behind the “game” got to me too the point where the movie seemed un-enjoyable. It delivers its message behind all the violence, “Are we the condemned” a news-reporter asks. While still pretty well-made (but only moderatly well acted by “STONE COLD” STEVE AUSTIN, but YAY for VINNIE JOHNS!!), this isn’t the worst film ever made (its not the most original either, it screams JAPAN’S excellent BATTLE ROYALE, TOKYO 10+1, even the old story THE MOST DANGEROUS GAME) I cannot help but feel that the message is rather lost in the films own hypocrisy. The message is not worth sitting through the brutallity of the films violence and language. Just a note, most of the films violence, while unsettling at times, is pretty bloodless. I suggest watching (if you can get a hold of it) BATTLE ROYALE. My personal favorite film; it is much more well-made, with deeper messages that are not clouded by hypocrisy. It is pretty violent at times but not disturbing and (this is rare) no sexual content. A 10/10 in my book, that is the film I suggest instead of this. It hasn’t been released in AMERICA though so you will have too find other ways to get your hands on a copy of it.
My Ratings: Very Offensive / 3½

Michael Wilmington, Chicago Tribune
…should have been condemned to fight for space on the DVD shelves rather than be thrust upon unsuspecting moviegoers…

Michael Rechtshaffen, Hollywood Reporter
…‘The Condemned’ fails to provide a single good reason for its existence…

Alex Markerson, E! Online
…Tailor-made for those who like their violence multifaceted and their women monosyllabic…