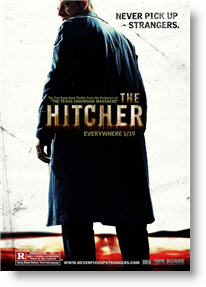 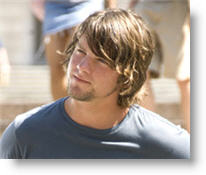 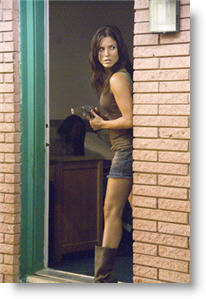 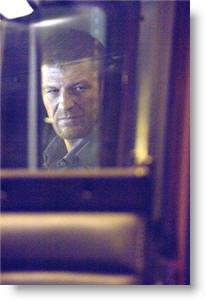 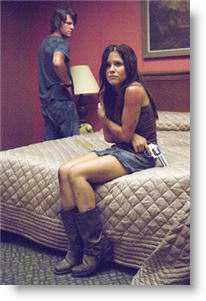 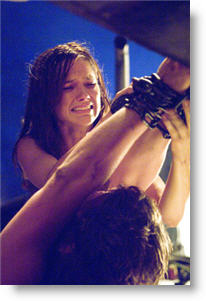 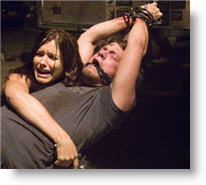 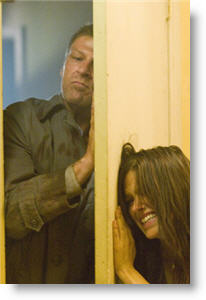 Here’s what the distributor says about their film: “From filmmaker Michael Bay’s Platinum Dunes production company (producers of ‘The Texas Chainsaw Massacre’ and ‘The Amityville Horror’) comes ‘The Hitcher,’ an update of the 1986 film of the same name.

Dave Meyers makes his feature directorial debut on the new thriller, which tracks the terrifying trajectory of Grace Andrews (Sophia Bush) and Jim Halsey (Zachary Knighton), a collegiate couple who are tormented by the mysterious hitchhiker John Ryder, a.k.a. The Hitcher (Sean Bean).

The young couple hit the road in a 1970 Oldsmobile 442, en route to spring break. But their pleasure trip soon turns into a waking nightmare. The initial encounters with Ryder are increasingly off-putting for Grace and Jim, and they bravely fight back when he ambushes them. But they are truly blindsided when he implicates them in a horrific slaying and continues to shadow them.

The open road becomes a suspenseful, action-packed battleground of blood and metal as, in trying to elude not only Ryder but also New Mexico State Police Lieutenant Esteridge’s (Neal McDonough) officers, Grace and Jim must fight for their lives and face their fears head-on.”

Negative—Apart from the extreme violence in this film (and even one scene that seemed to glorify the killer), as a former atheist, I noticed a lot of religious symbolism (such as: a place of safety features a message about Jesus on the wall and attack dogs cut them off and keep them from being saved) and characteristics in the killer that as an atheist I would have said of the God of the Bible. I got the impression that the filmmakers were trying to portray God as a ruthless killer and the only conclusion was for us to “kill God.” I could be way off base here, but that was the strong impression I got as I watched the film.
My Ratings: Extremely Offensive / 4

Cody Cook, age 19
Positive—I thought this was a great thriller. There was some language and some pretty bloody scenes to it, so I wouldn’t recommend it to the queezie’s. The movie was good all around, and it made you jump quite a bit, but if you have a problem with mini skirts I wouldn’t suggest this one is for you.
My Ratings: Average / 4

Matt, age 20
Negative—Several issues exist in this movie which make it not so great. In the first minute or so of the movie the girl changes her shirt in the car in front of her boyfriend so right off we are exposed to some nudity and this scene does nothing at all to add to the plot. Later on during the trip, the girl is reading an article about rating your boyfriend sexually and begins to talk seductively to her boyfriend but is interrupted when they almost run over the guy in the road. There is a ton of sexually-related language found throughout the movie. The way she asked her boyfriend if he wanted to have children was kind of weird. The guy and girl eventually break into a motel room where they take a shower together, so that is pretty much the only actual sex scene found in the movie, but could have easily not been included. Tons of bad language can be found throughout the movie. The movie also contains ton of intense violence. The only good thing I found about the movie is the guy and girl pretty much stuck together during some horrible stuff.
My Ratings: Offensive / 3½

Lyndi, age 21
Comments from young people
Positive—“The Hitcher” was a great movie. I would recommend it for teens and adults, cause their were some gory little parts in this movie. The only bad words I heard was the f-word which they said quite a few times. Sophia Bush the actress in the movie wears a mini skirt the whole time, and she was in her underwear in one scene. I loved this movie a lot, and it made me jump quite a few times…
My Ratings: Good / 4