for strong bloody violence, language, and some sexuality/nudity 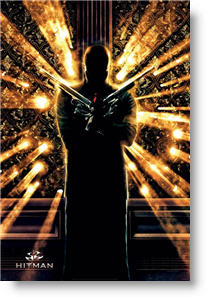 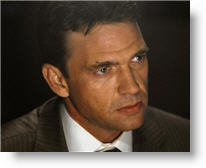 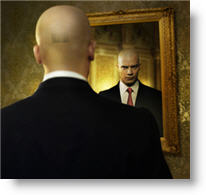 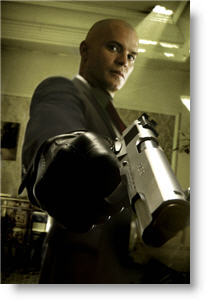 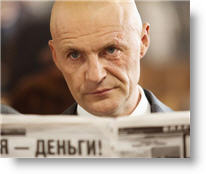 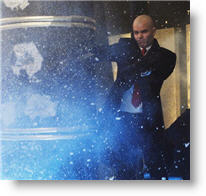 VIOLENCE—How does viewing violence in movies affect the family? Answer

“Hitman” opens with a strangely spiritual sequences of scenes. A young boy is being initiated into a mysterious school for assassins—run by men dressed like monks. The actual scene of ‘graduation’ if you will plays out like a twisted religious ceremony with the music from ‘Ave Maria’ serving as the soundtrack. The title character, Agent 47 (Timothy Olyphant) is touted as the religious type, emphasized by the fact that he carries a crucifix with him carrying the inscription “Trust unto God and He shall direct your path.” However, that’s about as far as this film explores that spirituality.

Agent 47 may be religious, but he certainly doesn’t show it in his career or life-style. He is a cold, calculating, professional killer who intricately plans out every assignment and never misses a shot. Until now that is. An assignment to assassinate the president of Russia goes awry and now 47 is on the run from the Russian militia. Not only that, Interpol, who is consistently frustrated in their attempts to track him down, has Mike Whittier (Dougray Scott), a man devoted to hunting down Agent 47, hot on his tail. To top it off, 47 keeps being ambushed from members of his own elite assassin school, leading him to believe that he is being set up, which leads to a race to the truth before Hitman is hit himself.

For a movie based on a video game, this is actually a very complex plot, and one that manages to come full circle, in spite of itself. However, for the most part, character development is put on the back burner in favor for strong violence. This is based on a video game, after all. Thus, there are several action sequences involving shoot-outs, fist-fights, sword-fights, and explosions. A battle on a train and a shoot-out in a night club are especially brutal. Blood sprays and splatters and pools around fallen bodies. Each blow, each shot, each stab are seen and heard in each stylized sequence.

Elsewhere, a man is force fed explosives and later explodes while hanging in a bloody torture chamber and another man is chained to a bathtub connected to an electric generator. Language is heavy, with two dozen s-words and f-words altogether, some English and some in Russian. Nudity is also exploitatively extreme, for Agent 47 finds himself in the company of Nika (Olga Kurylenko) whose only purpose seems to be either walking around the hotel room nude or graphically seducing 47 by straddling him nude (full frontal both times), although 47 resists her advances.

I do enjoy a good action film and the action sequences here are expertly choreographed and the story is generally well-executed. The actors do their best with the material given to them, although Olyphant made a much more convincing bad guy earlier this year in ‘Live Free or Die Hard’. Of course the amount of problematic content cancels out any positive messages (there weren’t any anyway, except Agent 47 does resist knocking off a few bad guys when he had the chance to—very occasionally). So, in conclusion, “Hitman” is just another glorification of graphic violence, whose characters are just as emotionless and ruthless as the video game on which it was based.

Positive
Positive—A secret society named The Organization has been taking reject children; orphans, etc. into their society and making them cold blooded assassins. They tattoo barcodes on the back of their heads. One particular agent is 47 (played wonderfully by Timothy Olyphant). He’s their best. The movie opens with detective Mike Whittier (played by Dougary Scott) coming home and finding 47 pointing a gun at him. 47 tells him to sit and then asks him “Do you think you are a good man, Detective?.” Before the Detective answers, he also asks, “If so, when does a good man decide to kill?” He answers, “I think so.” Rewind 3 months and you are taken to an assassination attempt that 47 is trying. Then the story starts gaining gas and continues speeding when 47 finds out that he’s been setup and must find this girl Nika (played by Olga Kurylenko) and figure out who betrayed him.

47 goes to a mixture of places all over Europe assassinating people while gaining info and still being hunted by the society who created him. Doing all this with Nika in tow and finding information on himself and two governments also hunting him gets him into a rampage and eventually finds who did it.

To start off the story-line is very good in my opinion. Very espionage like. But, still has ties to taking revenge. Now to some people this movie will not offend them at all. Some people will be extremely offended by this movie all depends on your point of view. This movie only offended me a little because of the nudity in it. Besides that I absolutely enjoyed this movie.

Positive Content: …not a lot, but there are some.

1. Throughout the movie 47 sees something in Nika to motivate him to be her protector. Several times he saves her life and tries to tell her some things are very bad ideas.
2. When 47 is tempted with sex, he adamantly declines and says this is a very bad idea, before almost anything happens.
3. Though a killer, 47 is religious — …catholicism.
While that is not a lot of good morals, 47 still shows courage when around Nika, and many times tries to save her life and succeeds.

Negative Content:
Violence—the violence in this movie was strong and graphic in its nature, but not overly bloody. People were shot, stabbed and blown up. Because of its artistic look, it’s more graphic and intense then if it wasn’t choreographed. Otherwise, the violence was not really bloody.

Language—…when the first word out of anyone’s mouth is the F-bomb you know for a fact there’s going to be language in the movie. “Hitman” was actually quite tame for it’s genre. Most action spy movies have gobs and gobs of language. This movie did not. There were about 12 F-bombs, about half of that in S-words give or take a few, and a hand full of other profanities.

Sexuality/Nudity—…no one has sex in this movie… There is, however, some nudity. The first time is when Nika wakes in nothing but a thong. She walks around so you see her breasts from practically every angle possible. After a minute, 47 says, “Get dressed, we’re going shopping.” Reluctantly she does. The second time is right after a assassination 47 and Nika walk into their hotel and Nika is drunk and insist that 47 undress her. He declines. She takes off her shirt to again reveal her breasts. She starts to kiss him on the neck and insists that they make love he again declines. He then after a second he zaps her with this stunner thing, and she is knocked out for a while. …there is a part where girls wear next to nothing, for their clothes do reveal quite a lot. …there is one, I guess you could say, joke in the dinner where Nika gets drunk. Nika questions 47 in trying to figure out how smart he is. She asks him what color panties am I wearing. He replies with a simple you’re not wearing any. She smirks, but still too much info.

Spiritual Content:
The Organization is a banned religious group, from what we’re told in the movie. Detective Whittier when investigating 47’s weapons case finds a cross.

Conclusion: Overall, I very much enjoyed this movie. Now if you are easily offended by violence, language, or nudity, DO NOT go see this movie. Those who aren’t GO SPEND THE 7 DOLLARS TO SEE IT. It’s just that good. Violence: Heavy / Profanity: Moderate / Sex/Nudity: Mild
My Ratings: Average / 5

Jon Edwards, age 18
Positive—…this movie was incredible, I did not find it offensive at all. Two nude scenes, but that was it, for those of you who played the video game, don’t tear it apart. It’s accurate to the game. Timothy Olyphant was amazing as Agent 47; the way he delivered lines was with such passion. Sword fights, gun battles, and corky remarks. Its “Bourne Identity” meets “The Matrix.” …I strongly recommend this film!
My Ratings: Excellent! / 5

Negative
Negative—This movie was such a disappointment. The major problem was the casting for the main character. Timothy Olyphant was a terrible choice. He is not an action star, in any way. Jason Statham would have been the perfect choice for this movie!! Or even Clive Owens, or Daniel Craig would have been good. At least somebody with action experience and most importantly British, like the game. The fight scenes were comical. In one scene, four other hitmen appear out of nowhere to fight the main character, and they are all carrying swords in their suits, too?? The girl in the movie was nude for the majority of her screen time, although there was no sex. It didn’t fit the mood of the video game at all. I wanted to walk out when the girl strips and insists on having sex, during which Agent 47 knocks her out! What a badly acted, made, and choreographed movie. Not worth the watch.
My Ratings: Very Offensive / 1

James, age 25
Negative—Hitman does very little to revive what feels like a dying genre—the action film—and though it goes for a style all its own, the overall taste of it is as bland as a baked potato with no fixings. Without the style and sizzle an action film should bring (ala The Transporter, The Matrix, Raiders of the Lost Ark), and without a strong character to lead the audience, what you have is approx 90 minutes wasted in the dark.

It seems that this film is like many others nowadays—not just a symptom of the suffocating action film—being about three or four script rewrites shy of a decent movie worthy of the price of admission.

Content wise, there is plenty for the squeamish to shy away from. If the title didn’t spoil this aspect for you, it is a very violent film. And while our main character abstains from sexual encounters with his female counterpart, there is plenty of nudity to go around—none of which is essential to the plot of the story.

As a Christian and a screenwriter, I refrain from jumping on the content bandwagon overall. Yet in my maturing faith I am finding that if someone’s life is taken on screen it had better mean something, and I find very few, if any, permissible reasons for a woman to take off her clothes on screen.

Offensive content aside, the film provides very little bang for the buck. Don’t bother with it on DVD. Wait for the television network run, and even then, flip to something else if something more entertaining is on.
My Ratings: Extremely Offensive / 1½