for sequences of intense action violence 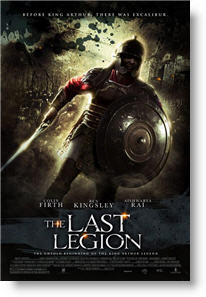 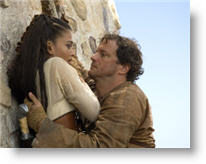 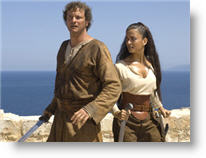 faith in the Bible

“The Roman world is in the throes of death, but a new myth, destined to span the centuries, is waiting to be born. The untold beginning of the King Arthur legend.”

“The Last Legion” is set in 5th century (460 A.D.) Rome on the eve of the Goth invasion which brings down Roman civilization and plunges Europe into the Dark Ages for 500 years. The premise of the movie features a quest motif like those found in “Indiana Jones,” in “The Lord of the Rings,” or in the original “Star Wars” movie. As part of the quest motif, a varied band of heroes come together to achieve a goal; in this case, they overcome great odds to rescue the young emperor, Romulus Augustus (Thomas Sangster), who was captured and imprisoned by the Goth king Odoacer (Peter Mullan) and recover Caesar’s 450 year old sword which is as good as new.

The movie is targeted at young boys of approximately 8-18, much like the recent movie “Eragon.” Unlike “Eragon,” it has good production values, better acting, and no CGI. The cinematography is excellent, especially the breathtaking scene in the Alps which I believe is authentic. The costuming, the outdoor sets, the backgrounds, all show great attention to detail and in their way are as convincing as similar pieces in a movie like “Gladiator.” On the down side, the writing isn’t very good, and the score ranges from sentimental to bombastic.

One of the pleasant surprises in the movie is the appearance of Aishwarya Rai, a popular Indian actress. It’s refreshing to see a new face (especially one so beautiful). Rai can act and is more convincing in her physical stunts than Uma Thurman was in “Kill Bill” Volume I and II.

According to the history books, the young emperor, Aurelius, and Odoacer seem to be accurately represented, and even the final battle represents a historical conflict called The Battle of Mons Badonicus. The film merges these historical figures and facts with the legend of King Arthur and Merlin. There are many set pieces spoken by Ambrosinus (Ben Kingsley) which convey either a philosophical or a moral meaning. For instance, he says “Have faith, there is a purpose in all things”; “Prophecy is an act of faith”; and that the medallion is the “symbol of faith and truth.”

While not an explicitly Christian message, there are Christian themes of rebirth, renewal, and redemption. Men sacrifice their lives for their friends and for an ideal. The movie’s core idealism is a throwback to a more innocent time of film making. Viewers who depend on special effects, MTV editing, and sexual content will probably be disappointed in this movie. But if you want to see the equivalent of a good Saturday matinee movie, one that you can take the family to and not be offended, this one fits the bill.

The only possible objectionable scene shows Rai coming out of the river in a wet tunic which clings to her body. However, Aurelius’ response is honorable, and the movie avoids the cheap thrill of making the audience leer through the eyes of another character.

In brief, it’s not a great movie, but it teaches ideals such as telling the truth, being honorable, being brave, and standing up for one’s beliefs. It’s a good role model film, a role that the movie itself consciously tries to play, as in the last line “We need heroes, don’t we?”

Positive
Positive—I went to this movie with my 13 year old daughter. It was a decent movie. There obviously was quite a bit of action, but without the unnecessary bloody mess that often comes with it. The characters were believable, and the fact that there was a female warrior from the Eastern Roman Empire bumped up the rating one grade from my daughter’s perspective.

I don’t remember any swearing or nudity. At one point, the female came to bed with the male Imperial guard (they were in love), but did not necessarily indicate that they had sex. There were some funny moments, and the acting carried this movie, along with the action and some cool scenic filming. I watched this movie with my daughter over the Bourne and Rush Hour, because it was just much cleaner than the other two. I will probably wait for the DVD for the other two, so I can fast forward over the unnecessary offensive material. …
My Ratings: Good / 4

Gary Ford, age 40
Positive—This was a great film for the whole family. My wife and kids enjoyed it. The cinamotography was excellent as was the acting and plot. Hollywood should make more films like this. It’s not surprising that it didn’t get rave reviews by Hollywood. The movie lacked blood, gore, bad language, nudity, sex and immoral behavior.
My Ratings: Good / 4

Peter, age 49
Positive—Good historical action movie. No unnecesary sex, language or violence. No direct message toward the gospels but it did cover the value of faith, friendship and loyalty. Not many films today can to that.
My Ratings: Better than Average / 4

Jim Palmer, age 37
Neutral
Neutral—I found “The Last Legion” an entertaining movie and as stated in the film overview, that it had decent moral values. I do not, however, think that the symbol of the “pentagonal” as they called or pentagram, is apt in relation to Truth, and all things that are good! I realise that this is a movie, and that they have license to do what entertains, however, there is a clear line between what is good and is representative of that good and what is not good and the signs and symbols that is representative of those things that are not good! So for me, I get nervous when those lines are blurred and items are borrowed across the line to be used as representations for what it clearly does not represent.
My Ratings: Moral rating: Better than Average / Moviemaking quality: 4

Werner Dercksen, age 29
Negative
Negative—…when the Ben Kingsley character mouths that the medallion is the “symbol of faith and truth,” he is describing a pentacle. …Rather than following the overt Christian ideology of the Arthurian legend, the film has re-invented the story as a pagan epic. The sword Excalibur now displays a pentacle, too. I agree with the previous commenter that this whole Hollywood superchick warrior fantasy has worn pretty thin.
My Ratings: Moral rating: Very Offensive / Moviemaking quality: 2

Ben Ogilby, age 41
Negative—There’s a troubling trend in Medieval Historical movies these days, to either totally ignore Christianity in the European Middle Ages, or else mock and even outright vilify Christian people and the Christian faith. This movie falls into the former camp. At a time when the Roman Empire had been officially Christian for almost a century, there are no references to Christianity at all. OK, so not everyone was a Christian, but seriously?

Instead the main religious voice is the secondary protagonist and hero’s mentor—Merlin-type figure, said to be a magician from Britannia. So, 400 years after the Romans wiped out the Druids of Britain, one just appears in Rome, as the Tutor, the boy Emperor, no less. Aside from presenting post-Roman Britain as some kind of pagan haven (apparently ignoring the historical evidence for the presence of Christianity in the British Isles at that time), as common with many other movies. See all »
Perhaps the most worrying aspect was the appropriation of the Pentacle or Pentagram as the symbol of “faith and the true religion.” Religious aspects aside, the presence of an Indian Warrior woman is purely a symptom of the tiresome political correctness ever present in many modern cinematic offerings. Don’t get me wrong, I have no issue with strong female characters, or Indian people, but her character is such a cliché. Practically perfect at everything, constantly having to remind everyone that women are just as good as men—and, of course, super glamorous—cause we need a sexy, sword wielding gal” right?

Sadly, another dose of silly, pseudo-historical claptrap posing as a King Arthur movie, perhaps with something of an agenda. Even with solid actors like Colin Firth couldn’t save it.
My Ratings: Moral rating: Very Offensive / Moviemaking quality: 3

MedievalGirl, age 26 (United Kingdom)
Comments from young people
Positive—…The movie itself was pretty good. The fighting was well done and much better than “Eragon,” which really didn’t have any fighting. The acting was also good with excellent performances from Ben Kingsley and Colin Firth. The violence was minor, but still deserved a PG-13 rating. There was no cursing or other bad language, which is obvious looking at the movie’s ancient setting. Unfortunately, there is one scene of implied, premarital sex. However, the scene fades out, ending it before the couple get a chance to kiss. The scene is also somewhat forgiven because the two get married at the end. I guess I gave “The Last Legion” a “positive” review simply because it is so refreshing to see a movie about the ancient times that isn’t graphic in gore and sex such as “Troy,” “300.” Overall, I will say that this was a good flick and would recommend it for ages twelve and up.
My Ratings: Moral rating: Better than Average / Moviemaking quality: 3½

Perry Simpson, age 14
Comments from non-viewers
What Christian values do we show to young Christian boys and girls by portraying a historical multi-cultural warrior bands that include silly women pretending to be warriors? Do we want to encourage our young girls to aspire to killing as a profession—something that they are totally unsuited for despite what our PC military recruiters claim, and, at the same time, tell young boys that fantasy women warriors are the equal of men. This is insidious because the makers of the film have made a gullible audience believe the film has some basis in historical fact.

A movie that does not promote traditional roles for Christian men and women should be avoided. I’m very tired of pseudo-hiustorical modern films that bash traditional Christian norms! My children will not see this film!