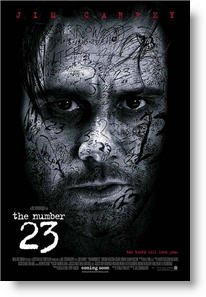 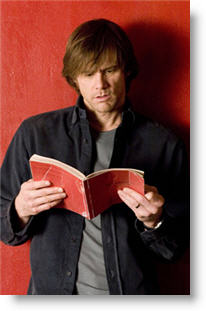 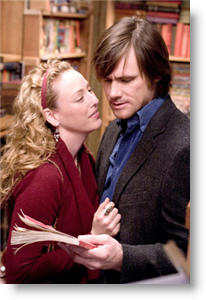 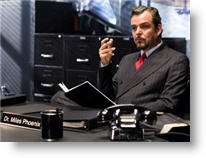 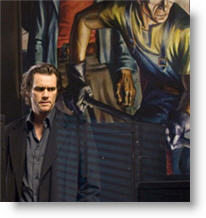 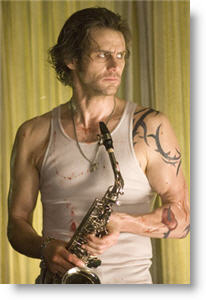 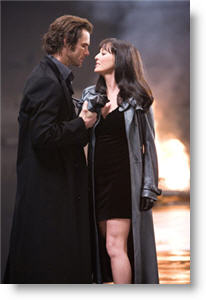 This is a Joel Schumacher film, which gives it a fifty/fifty chance of being decent. Unfortunately for the viewer, “The Number 23” falls into one of the Schumacher lemon piles. Although I would not attribute the direction alone to this film’s failing; trying to make a good film with a flawed story cannot be an easy task. In fact, it was close to being a good movie, however, the last quarter would just need to be totally re-written. Matthew Libatique’s cinematography is impressive, and the strongest acting performance is played by a dog called Ned.

The film itself has been devised around “The 23 Enigma,” which gives it some credibility, just like those silly horror/thrillers vaguely connecting themselves with scripture. If you are interested in numerology, this film gives you little to no detail on the science, and you would find more information on “the 23 enigma” by reading Robert Anton Wilson and Robert Shea’s Illuminatus! Trilogy.

Walter Sparrow (Jim Carey) is very much a normal guy, everything about his life is normal, until his wife (Virginia Madsen) buys him a book called “The Number 23.” Immediately, Walter sees the parallel between the book’s lead Fingerling and his own life. Not a perfect match by any means, but close enough for Walter to begin obsessing about the similarities and especially the parallels that the number 23 is providing. A psychologist friend (Danny Huston) alludes that he is looking for 23, therefore he is finding it, but this doesn’t stop Walter from a path of fixation that deals with death, insanity and moral responsibility.

There is little reason for a Christian to view this movie, primarily because it is really quite silly. Second, is the offensive material, there is no nudity, but plenty of sensual themes and moments—while the f-word was used six times, and there is plenty of blood and multiple graphic suicide scenes. Scripture is quoted out of context, and the psychologist implies that people only pray because they need something.

I find it fascinating that we as humans have such a desire to want to know everything. We look for codes and enigmas to try and explain the unknown; there is the DaVinci code, the “Bible code,” and countless numerology theories. Yet, they are all a load of hogwash! Everything we need instruction for is given to us in God’s revealed word. There is nothing hidden; what we need to understand is understandable. The Bible is our guide and gift given to us by our loving creator! Why look for more?

Negative—This movie started off to be quite a thriller, although somewhat predictable, and being an 18 year old, I figure most people can catch on pretty quickly to what is happening. Appeared as if the director tried lengthening the movie at the beginning and tried wrapping it up in several minutes at the end. The plotline was somewhat miniscule, going all over the board, but this movie was average, if nothing else to do, rent it when it comes out, wouldn’t pay for it in theatres again.
My Ratings: Average / 2

Matt Sallinen, age 18
Comments from young people
Neutral—This movie was struggling to keep my attention for the whole film length, the film seemed like it was trying to be artistic, but came across as just a dark, dreary waste of time. There is nudity and swearing in this movie, but not a surprise due to its MA rating, morally it’s not good entertainingly; it’s not great, although the acting is surprisingly good. I won’t be watching this movie again and wouldn’t recommend it to anyone.
My Ratings: Moral rating: Very Offensive / Moviemaking quality: 4

Tristan, age 16, Australia
Positive—This movie was well made (apart from the occasional f-bomb and multiple sex scenes peppered throughout). This film could have been chucked full of the f-word and severe nudity, but it surprised me. Jim Carrey did an excellent job, and I loved the mystery. I found myself counting every word and adding every number—and let me tell you—everything added up to 23. That is so cool, and it just shows the detail put into the movie. It was great, and it kept you guessing. I will definitely see this film again, and I recommend it to the adults who don’t go to movies expecting a spiritual uplift. Remember… it’s just a movie.
My Ratings: Offensive / 5

Emily, age 17
Neutral—All content aside, this movie was mediocre at best. The concept was there, but the execution wasn’t up to par. The story dragged on, holding just enough interest to keep you interested. A lot of it seemed forced; it felt like it was trying too hard to be the clever thriller. It didn’t work. It was predictable, but still confusing—not the best combination. All in all, I don’t regret seeing it; it just wasn’t the best.

Quality aside, the movie did have a lot of objectionable material. The idea of it at all would be offensive to many conservative Christians. The movie was quick to point out the relation that 2/3 = .666. You can take this lightly or not, as it didn’t really play a big role in the movie. What there was a lot of was sex, or the allusion to it. Never fully depicted, but enough to give you the idea. Violence was moderate, disturbing images frequent enough. I honestly don’t remember what the language was like. This movie is fine for mature Christians, but I wouldn’t recommend it for younger teens down, depending on the kid. The bottom line is, if you know the basic plot and still want to see it, go ahead; if you’re turned-off by it, you wouldn’t see it anyway.
My Ratings: Offensive / 3