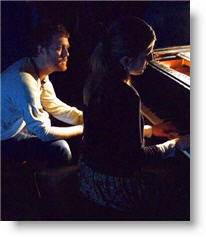 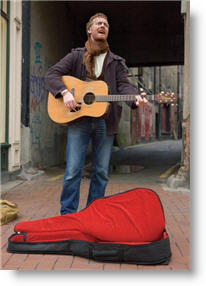 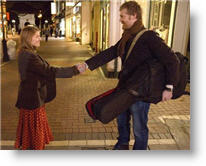 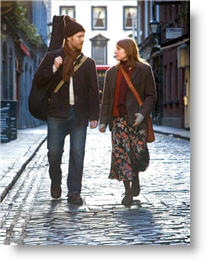 Learn how to make your love the best it can be. Discover biblical answers to questions about sex, marriage, sexual addictions, and more.
Music

Songs in the Bible

“How often do you find the right person?”

Here’s what the distributor says about their film: “A modern day musical set on the streets of Dublin. Featuring Glen Hansard and his Irish band ‘The Frames,’ the film tells the story of a street musician and a Czech immigrant during an eventful week as they write, rehearse and record songs that reveal their unique love story.”

Odds are you haven’t heard of “Once.” It is a small movie filmed for about $150,000 in Ireland over the course of seventeen days. It slipped under the radar with a wide American audience, its widest release being just 150 screens nationwide. However, the excellent critical buzz has helped this film gain an ever-growing audience.

“Once” is about two things: music and relationships. However, don’t let that fool you, this is neither your typical relationship-driven film nor your typical musical. Instead, it’s a very special, personal film about the hardships and joys of life.

The story opens with a Guy (Glen Hansard) playing his guitar on the Dublin streets. Eventually his music draws a Girl (Markéta Irglová) to come talk to him. Very quickly an incredible relationship develops on the foundation of music. The Girl leads the Guy to a music store to play piano for him. It is there that one of the most honest and incredible moments in modern cinema takes place. The guy teaches her one of his songs, and in the solitude of the little music shop, they create truly beautiful music.

From that moment on, it is clear to the Guy and Girl that they have a connection. However, contrary to what you would expect, their relationship isn’t at all of a sexual manner. Instead it’s built on understanding, a passion for music, and a deep friendship.

Although we never know the names of the Guy and Girl, it doesn’t take long until we feel like we know these people. Because Hansard and Irglová play these characters with such honesty and likeability, they are truly a joy to watch. Neither Hansard or Irglová are actors, rather director John Carney decided that he wanted to cast, “Singers who can half-act, rather than actors who can half-sing.”

This resulted in the songs in the film being nothing short of breathtaking. Both Hansard and Irglová are accomplished musicians, and their talent and charisma absolutely shines through in this film. The musical scenes have many long, uncut takes, which are really remarkable. I would bet that after watching the film, many people will go out and buy the soundtrack, as I did.

This is director John Carney’s first film. For having such a small budget, the film, technically, is quite astounding. However, you will be able to see a noticeable difference visually from “Once” and a big-budget Hollywood film, but to me that just adds to the charm of the film.

As far as objectionable content, the only real issue to be concerned about is the language. The F-word is used fairly often (39 times), as well as the S-word (2 times), and two uses of the Lord’s name in vain. It is worth noting, that the F-word is never used in a vulgar or sexual manner. Also, keep in mind that in the first three minutes of the film, the language is considerably heavier than throughout the rest of the film. After three minutes, the language is toned down considerably. Also, at times, the accents of characters are so thick, you might not even notice the profanity.

There is no violence or sexual content. In one early scene, the Guy brings up the idea of “Spending the night,” but she quickly rejects him and leaves. He later apologizes for his behavior, and she forgives him. After that moment, the subject isn’t seriously brought up again, because it’s understood that their relationship is purely one of friendship. Additionally, in a dinner scene, people are consuming alcohol with their meal and smoking.

While this movie is rated “R,” this isn’t your typical R-rated film. In terms of overall content and story, people of all ages could enjoy this movie. That is why the multiple uses of the F-word seem so out of place, which is a shame because it really alienates younger viewers.

However, if you’re a mature viewer, and can get past the language, there is a lot to be commended in “Once.” Both the Guy and Girl genuinely care about each other and others, including their elderly parents, whom they live with. The songs in the film are really positive, and virtually free of profanity. It’s refreshing to see such an honest film that depicts the dreams and reality of such ordinary and relatable people.

Even if you don’t like musicals, don’t be turned away from this film. It’s not a conventional musical where characters miraculously all break out into song and dance. Instead, the music is completely natural. This film simply tells the story of these two people, and their lives just happened to be fueled by music. If you’re in for amazing performances, creative direction, and a batch of truly wonderful songs, “Once” will certainly not disappoint.

Positive—First, let me say even though I gave it an average moral rating, that really depends on your frame of reference. If it wasn’t for the liberal use of the f-bomb (which to me was so unnecessary), I’d recommend it for teens and give it a better than average rating. With that said, movie-making wise, this is one of the most amazing films I have ever seen.

Being a music lover, not actually a musician, I would recommend this for any of the former or latter, esp. musicians, or artists of any type. This film is all about simplicity. It was made on a $150,000 budget, with mostly, if not all, non-actors (mostly professional musicians) by an independent Irish director who used to be the bass player in the lead actor’s band.

It is a simple story-a working class (poor) street musician in Dublin meets a young music admirer (also poor) who happens to be a pianist and singer herself. The story chronicles their relationship over a weeks time, which is mostly about writing and playing music together.

Yes, there is a romantic element to the story, but not what you would think, and it along with every thing else is secondary to the MUSIC-which is great by the way. It is secular-but it is un-offensive (mostly), and about universal themes like broken-hearts, and love not reciprocated.

This movie is definitely not for everyone-in fact, most will either love it or hate it. The appeal to me is that it is so natural and intimate and homemade-you feel like you are part of something real. The relationships, dialogue, everything is so natural and unforced. No big budgets, big stars, or big egos here-this is stripped down simple moviemaking about those who have a passion for music, and pleasing others with that gift. That’s why I love it so much that it is my pick for movie of the year easily.

And if you are not offended by the language, you will also experience a truly sweet and innocent relationship movie(yes-you could qualify it as a “chick” flick)-but I really don’t—just a true original piece of art.
My Ratings: Moral rating: Average / Moviemaking quality: 5

David P. Momberg, age 45
Positive—“Once” is an absolutely brilliant film. I don’t think I need to say much about what the movie is about. The reviewer did an excellent job.

However, I do have to comment on the use of the “F” word. This movie was made in Ireland and cultural norms for profanity are a little different than they are in the United States. Saying the F-word there is about equivalent to saying the D-word here. The way it is said slips right past your ears because of the Irish accent. If you listen, you can tell it’s more an exclamation than a dirty verb. Thankfully, it wasn’t used in any vulgar manner here, but only as an adjective or exclamation. Smoking and drinking are also more widely acceptable in Irish culture. It’s not an attempt by Hollywood to sell bad habits or promote anti-Christian agenda, this is an Irish film reflecting true bits of Irish culture. The viewer must keep this in mind when watching a movie with different cultural values.

That being said, this movie is VERY surprisingly clean. You will not find one sex scene nor any heavy making-out scenes in the movie and the characters stay morally true—although the Guy does awkwardly ask the Girl if she would like to stay the night, she refuses—and credit to her, is even insulted by his disrespect. I wish movies made in America would resort back to purer themes and values as this one is based on.

This is a MUST-SEE for every music lover—and the use of the “F” word is not even enough to deter not letting teens watch this who may be inspired more by the music than by anything else. This is a movie that will make you want to learn an instrument or if you already do play, as I do, you will immediately want to pick up your instrument and play again. It’s the most entertaining form of music appreciation you will find. I own the soundtrack and the DVD and am very pleased with both—especially for the bonus features. Another intriguing tidbit about the movie: Glen Hansard and Markétá Irglová are a couple in real life, now. Apparently, they fell in love sometime during filming and post-production.
My Ratings: Moral rating: Better than Average / Moviemaking quality: 5

Kelly, age 30
Positive—What a movie! I imediately went out and bought the sound track the next day. Being a muscian, I’ve been so incredibly inspired to write more honest songs. As many have said here, the use of the F-word is more of a cultural thing (although I’m not sure I would take a youth group to see it) and can easily be looked past.

I love the honesty on thier relationship. As the reviewer talked about the “guy” made an incredibly desperate attempt to have the “girl” stay the night. The very next day there is a very sincere and believable appology. The girl constantly asks difficult, thought provoking questions that force the guy into really examining his life and other relationships. Very nice work for non-actors!

I can’t recomend this movie enough. I’m so glad it was recomended to me.
My Ratings: Moral rating: Better than Average / Moviemaking quality: 5