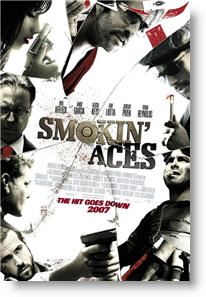 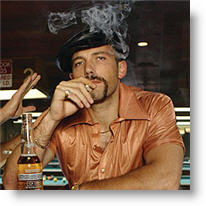 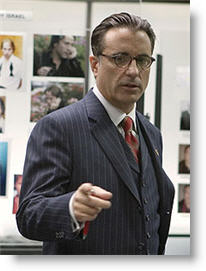 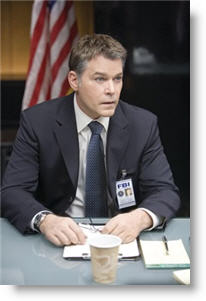 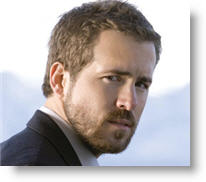 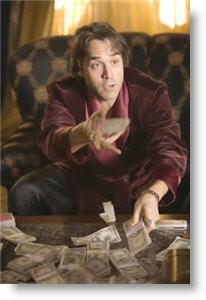 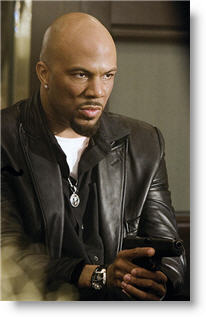 “May the best hitman win.”

Here’s what the distributor says about their film: “Mob boss Primo Sparazza has taken out a hefty contract on Buddy ‘Aces’ Israel—a sleazy magician who has agreed to turn state’s evidence against the Vegas mob. The FBI, sensing a chance to use this small-time con to bring down big-target Sparazza, places Aces into protective custody-under the supervision of two agents dispatched to Aces’ Lake Tahoe hideout. When word of the price on Aces' head spreads into the community of ex-cons and cons-to-be, it entices bounty hunters, thugs-for-hire, deadly vixens and double-crossing mobsters to join in the hunt. With all eyes on Tahoe, this rogues' gallery collides in a comic race to hit the jackpot and rub out Aces.

Positive—Since there is no review and few comments, here is an explanation: “Smokin' Aces” is an homage to gangster and exploitation flicks. It glorifies Pam Grier-esque ladies in thigh high boots, Neo-Nazi brothers with a penchant for brutality, torture specialists ala Hostel, and cocaine. It represents everything that is wrong with the world in a neat, tidy little package. As the last reviewer stated, yes, it can be rather confusing. The “twist” at the end and, in fact, the entire cop plotline seemed out of place and unnecessary. It was an attempt to legitimize a film which everyone (including the filmmakers) should know is just brutal, disgusting fun. It’s not art, it’s not righteous, it’s not appropriate for anyone who is offended by worldly corruption. There is no message of redemption or Godly message hidden beneath the muck. It’s just highly stylized, well choreographed, beautifully photographed muck.
My Ratings: Extremely Offensive / 3

Kehli K, age 21
Comments from young people
Neutral—I did not know what this movie was about, and neither did I know that this movie was rated R (I went in with my brothers and some friends… WOW. It was an intense movie, and really well planned out, however, this movie is, for several reasons, bad. First of all, the plot line was confusing, I don’t even understand it, though after, a friend of mine, explained it to me (and saw it two times). This movie contains prostitution, gruesome images, torture, all sorts of disgusting, revolting images, and obviously, against God. So my recommendation to Christians? It’s really up to you! It’s a really confusing movie (hardly anybody understood it upon coming out of the theatre), though many may describe it as “cool.” If you like logical movies (with blood, killing, shooting, etc), then go for it. However, it won’t have a positive influence, at all…
My Ratings: Very Offensive / 4

Clifford Lam, age 14
Neutral—Entertaining, well done film. Very stylishly done, with good acting and great effects. Well done story line that is set up on solid ground and a great ending. But now for the moral side of the movie, which really is in some ways close too non-existent. I will keep this as diluted as possible.
SEX and NUDITY: 5/10
VIOLENCE: 8/10
LANGUAGE: 10/10
SEX and NUDITY: A prolonged scene in which half naked prostitutes (presumably from the night before) lay across a room before they are escorted out. Comments about prostitutes and other sexual things.
VIOLENCE: Very bloody. People are both shot and stabbed with bloody results. An intense shoot-out in an elevator (although highly entertaining) is one of many shoot-outs and fight scenes.
LANGUAGE: 115 F-bombs lead the pack among the other more heard bad words (although while watching it there didn’t seem to be that many)
This is not movie that many Christians will want to watch. But behind the content of the film is an awesome, highly entertaining stylized action film flick. Highly recommended to those who can deal with the content.
My Ratings: Very Offensive / 4