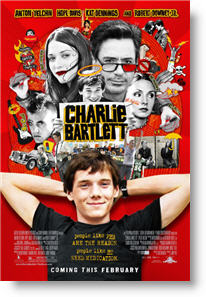 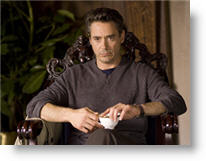 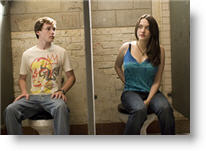 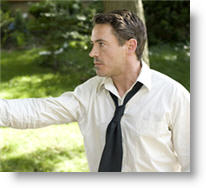 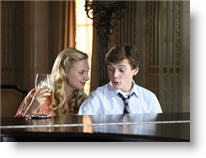 “When he listens, everyone talks.”

Charlie Bartlett (Anton Yelchin) wants what every 17-year-old high-school student wants: to be popular. In fact, he wants to be popular so badly, he is willing to do anything, even if it means laminating and selling hundreds of fake drivers licenses and being kicked out of a number of a prestigious private schools. Finally, Charlie ends up in your everyday, common public school, where he fits in even less than anywhere else.

But the ever-optimistic Charlie quickly finds a way to make himself more popular than ever before. He discovers that the majority of his classmates are depressed, lonely, angry, afraid or unhappy, and he decides to self-appoint himself as psychiatrist for the whole student body. His well-meaning advice and particularly his ability to provide prescription drugs without the prescription shoot him to the top, but eventually, reality will always drop in, and Charlie himself will discover issues in his own life that need dealing with.

The movie is very well acted. Yelchin and all of the other young actors, including Kat Dennings as Charlie’s girlfriend and daughter of the principal and Tyler Hilton as a local thug, easily hold up their own against the adult cast, which includes Robert Downey Jr. in a strong supporting role as Principal Gardner, a conflicted man who desperately is trying to be a good father to his daughter, and Hope Davis as Charlie’s slightly eccentric and emotionally unstable mother. The script is clever and the soundtrack is engaging.

“Charlie Bartlett” is, at it’s heart, a movie for teenagers, and it excellently and satirically captures the high school mindset. Teens will be able to identify strongly with Charlie and his need to be accepted and especially his tendency to pretend to be someone that he is not in order to gain that acceptance. Thus, they should also be able to discern that Charlie is often a liar, a cheater, a thief, and a manipulator. He is all of these things for a greater good, for he truly does care about the students and wants to help them, but it doesn’t justify his disregard for the rules, especially concerning his “drug trade,” although that particular vice is later literally flushed down the toilet.

Unfortunately, though, in spite of being a movie clearly aimed at teens, the moral content is that of a movie for adults. As well as all of his above vices, Charlie and his girlfriend also have sex in the back of a car, a head-and-shoulders but non-explicit scene juxtaposed with teens dancing suggestively at a party. Also a brief shot shows two topless girls running down a hallway. Many teens are shown popping pills, getting “high,” and in one case, committing suicide via overdose.

Many of the characters smoke and drink and use foul language (many f-words and s-words and misuses of the Lord’s name and crude references to body parts), although Charlie himself rarely does so. Principal Gardner struggles with alcoholism. The school bully ruthlessly beats up Charlie on his first day of school and later, we see numerous shots of other violent assaults, realistic, but not bloody.

So, we can clearly see, then that Charlie is not always a good role model, as are most of his classmates and the majority of the adults in the movie. All of them are human and all of them make very human mistakes and it’s a little unfortunate that there had to be so much negative content, because the positive content is strong.

The movie challenges both parents and teens to be aware of the needs of others, to confront issues in our own lives so that we can live and help others fully, and to use our abilities and chances wisely. As one character advises, “What is more important that being popular is how we use that popularity.” Discerning viewers will be able to take these lessons home and hopefully leave the trash behind.

Positive—When I first saw the preview for this movie, I was very excited. Now, after I have seen it, I want to see it again. Overall, it is a very encouraging film. It shows the good and the bad of an average high school with a sense of lightheartedness and humor. The acting was exceptional, and I would reccomend this film to any of my friends.

There were, however, a few places where there was some [objectionable] things going on. One example: there is a scene where Charlie exclaims that he is no longer a virgin in front of a crowd—and they cheer. It doesn’t go any further afterwards though, and the movie continues to reveal positive themes throughout. :) I loved this movie.
My Ratings: Moral rating: Better than Average / Moviemaking quality: 5

Brianna, age 18
Positive—I hope this will benifit both the kids who are trying to get there parents to say yes to this movie and the parents who are putting there foot down. Being a teen myself I can personally relate to Charlie who is a cast out who just tries to find a way to fit in (even though his way of fitting in may be selling drugs to teens in his class). Being a Christian, however, I know better than to sell drugs to fellow classmates, yes even after veiwing this film. So, to all of you parents who are still concerned…

Overall, Charlie Bartlett is just a teen who got caught up in the bad part of teenage years which most of us teens will have a spin with no matter how small or large that spin may be. Charlie Bartlett was a movie that taught me some good lessons about what not to do.
My Ratings: Moral rating: Very Offensive / Moviemaking quality: 3½