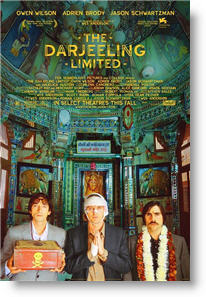 “We haven’t located us yet.” Thus sets the stage for three brother’s life journey in “The Darjeeling Limited.” The title comes from a train that travels into the heart of India, The Darjeeling Limited. On board it carries many different passengers and crew, but the most colorful are three brothers; the heavily bandaged Francis (Owen Wilson), Peter (Adrien Brody), and Jack (Jason Schwartzman who also contributed to the script). They haven’t seen each other in a year since their father’s funeral and the disappearance of their Mother.

The strain on their brotherhood has reached a limit where they can’t seem to trust one another. At first it seems for good reason as the eldest Francis is a control freak, the middle brother Peter is a kleptomaniac, and Jack, the youngest, has a knack for controlling women in pitiful ways. Francis has gotten them together for what he calls a spiritual journey that he has planned out on laminated cards. The other two are looking for any way to get out of this, but agree as they always followed Francis’ lead… just, well because he’s the eldest.

Of course, being a Wes Anderson flick (“The Royal Tenenbaums,” “The Life Aquatic…”)there is much more to this trip than what meets the eye. Through the course of this obviously comedic, often dramatic, quirky adventure, the three brothers learn much about themselves and why they are at the points in their lives that they are.

As I am a loyal Owen Wilson fan, I had to see this flick, but do not let the movie description on the DVD box fool you into thinking this is a light hearted farce good for the whole family. Far from it. There is much profanity (hence the very appropriate R-rating) which includes at least 9 utterances of the f-word, 3 a**hole,4 sh**,and 3 or more bullsh**. As well as at least two extremely vulgar sex scenes. Not to mention the short film which you may choose to watch that precedes the start of the movie titled “Hotel Chevalier” staring Jason Schwartzman and the very talented Natalie Portman. This short introductory film also contains vulgar language as well as a very explicit sex scene and, obviously, nudity.

There is much to say for the downside of this film pertaining to it’s R-rating such as smoking, drug use, sexually explicit scenes, nudity and the death of a child. There is not much I could possibly say in agreement for any Christian family to rent this DVD to view.

The brothers encounter many eye opening as well as heart opening situations along their journey. As Francis asks the hard questions we all have in life. Why are we here? Who can love us the most, our Mom, our Dad, our wives and husbands? Should we go into marriage just thinking if it doesn’t work out, divorce is always the best option? Is sexual encounters with perfect strangers the antidote to loneliness? I could go on and on as the film covers these and dozens of other questions we all have of life.

Jack says to a girl in the film, “Thanks for using me.” And I think a lot of our youth today are sadly mistaken that is all there is to a relationship. “Let’s get high,” is another supposed antidote to pain and disappointment. In reference to their Mother, Francis utters “She’s been disappearing all our lives.” And finally Jack says, “Maybe this is the way it’s (life) suppose to be.”

The sad thing is I couldn’t help thinking, “If only these characters had found Christ as the answer, they would have no problems. Their answers would all be answered once and for all.” But, then again, Mr. Anderson would have no script.

For all the complaining I might be doing, believe it or not, there is a certain redemptive quality to this film. Not that I endorse it per say, but there is this to note:

This is a spoiler, for those who would like to rent this DVD. A scene which is pivotal to these characters coming to grips with what has led up to their last year of estrangement, is the funeral scene.

After a child they attempted to save from the waters of a rushing irrigation ditch drowns, the three brothers take his body back to his village. There they are welcomed and treated with respect and caring. They are included in the funeral ceremony and are transported back to their own Father’s funeral day. The turning point in their own lives. As the two funerals are shown in comparison and contrast, it is a beautiful thing to watch how the story is adept at giving it’s audience the emotional impact of these two events at most times without speaking a word of english. The lyrics of the music set to this scene is also hauntingly intense, dealing with the facts that we are not “two but one,” we as family should stick together in all that life throws at us, “I will follow you where ever you go.” We all share the road we travel. No mater what petty arguments we might have, desperation, impulsiveness and misunderstandings are shown as emotions which can kill not uplift.

A great symbol in the concluding scene is the brothers running for the train and finally throwing off the luggage they have been dragging around through the entire journey. Love and support is honored. Brotherly love finds it’s way to be the cartelist for all love. Devotion for family is held high. And most importantly, self sacrifice in a time of need for people other than family were unexpected positive contributions to the overall message of this film.

The colors are rich and beautiful and the cinematography is breathtaking. The film is also rich in emotional symbolism that comes to a positive conclusion, although not towards Jesus as the answer, but these characters may have the expectation in finding Him, as they use prayer as their final hope.

Also there are cameo appearances from Bill Murray, Natalie Portman and Anjelica Houston.

The documentary is an entertaining plus to the DVD and the reasons for the script and the painstaking painting of the Darjeeling Limited is explored.

I had hoped I could recommend this to a Christian audience on some level, but unfortunately I cannot without compromising my integrity. As one character uttered to the three main guys, “Shame on you.”

In the end, this is an adult film, not a Christian friendly film, and it depends on your taste for quirky, off beat story lines in particular. “The Darjeeling Limited” got everywhere from an A rating from Roger Ebert to a lowly C rating from E! Online’s Alex Markerson.

Negative
Negative—This movie is super boring. I was told it was funny and there was not even a chuckle in this one. The story plot was sensless!

I don’t have much else to say but save your money.
My Ratings: Moral rating: Average / Moviemaking quality: 2½

Vera Conrad, age 40+
Negative—This movie in its entirety was a big waste of time. From the beginning opening scene on the DVD, 15 minutes was wasted to show how low the one guy’s life is (sorry, I don’t remember the names) as he encounters Natalie Portman and they basically say that they cheated on each other during the time they were gone and then they proceed to what is assumed to be sex. Besides that, the guy himself has been living in a ritzy hotel for many months doing nothing with his life and wasting his time.

Then, the brothers meet and it is indeed a sad state of affairs. Owen Wilson tries to play the cool nature-lover karma guy throughout the movie which is sad and cheesy (somewhat like on Zoolander) while the guy from the Pianist is all serious and trying to decide whether or not to leave his wife after they have a kid which he is not even there for (…???!!!).

With all of that plus the swearing plus their mother who abandons them, the movie portrays nothing but a dysfunctional trio of brothers and their family with no hope or direction. Sure the characters are seen engaging in a culture and the surface of its faith and some good scenery is shown, but overall, I saw no point to the movie—indeed, nothing that would make you say it was worth the time. The film seems to imply that happiness and reconciliation can be found in randomness and random, pointless rituals (i.e. random praying, burying the feathers, etc.) The movie was only slightly entertaining, very ungodly and nothing to be boasted, and the story itself was lacking badly.
My Ratings: Moral rating: Very Offensive / Moviemaking quality: 4

Joshua Piticaru, age 16
Negative—My main problem with this movie is the rating. It says “R-rated for language.” We’re always told that the burden is on us the viewers if we don’t want to see trash. Okay, well I decided I could tolerate a little bad language, but I certainly wasn’t expecting to see pornography. There was no mention on the DVD jacket that there was nudity or sexuality, and, all of a sudden in this film short before the movie, Natalie Portman takes off her underwear. Granted, I did not see her crotch, for at that time, I was scrambling for the remote and finally got the dang thing off the screen before any major sex happend, but it was about to. I complained to Blockbuster but they told me my only remedy was to complain to the ratings board. To me, there is some sort of falsity in packaging though.
My Ratings: Moral rating: Extremely Offensive / Moviemaking quality: 3½

Val, age 46
Positive
Positive—This film is very spiritual and about the journey these brothers take. The film focuses upon the brothers search to come together after years of growing apart. The film has strong themes of family, spirituality and redemption running through it. It is a beautifully made film with very moral and heartfelt themes.
My Ratings: Moral rating: Good / Moviemaking quality: 4½