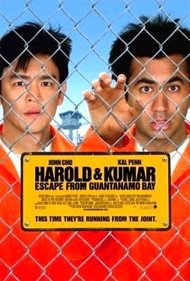 “This time they're running from the joint.”

Here’s what the distributor says about their film: “‘Harold and Kumar Escape From Guantanamo’ marks the return of these two slacker anti-heroes. The movie stars John Cho as Harold and Kal Penn as Kumar, two stoners who can't seem to get a break. Their last adventure found them traveling across country to find a White Castle hamburger in order to satisfy a weed-induced case of ‘the munchies.’

This time, the boys get themselves in trouble trying to sneak a bong onboard a flight to Amsterdam. Now, being suspected of terrorism, they are forced to run from the law and try to find a way to prove their innocence. What follows is an irreverent and epic journey of deep thoughts, deeper inhaling and a wild trip around the world that is as ‘un-PC’ as it gets.”

Negative
Negative—A bit funny in parts, but mostly just garbage for the mind. There is much which is very offensive to a Christian, so stay away. There is no shame about any kind of sexual subject in this movie.
My Ratings: Moral rating: Extremely Offensive / Moviemaking quality: 2

ScreenIt
…weed-obsessed… It's not exactly high art, but it's certainly high. …

Matt Pais, Chicago Tribune
…you'll only enjoy this movie if you can appreciate the lighter side of KKK rallies, presidential potheads, full-frontal nudists (of both genders) and Homeland Security fascists who mistake the U.S. Bill of Rights for toilet paper. …

Peter Howell, Toronto Star
…low laughs… And you get to see prisoners at Gitmo being forced to perform sodomy on burly Marines. …

Lou Lumenick, New York Post
…you end up wishing for something more consistently smart and amusing.

The Associated Press
…lacks the originality and big laughs of “White Castle”, relying on a crude joke instead of a smart one. …