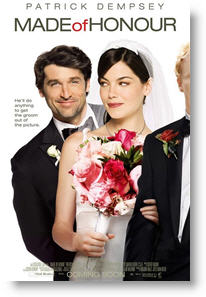 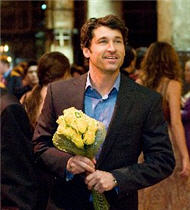 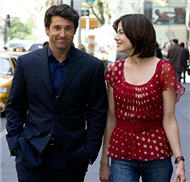 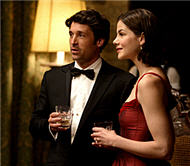 “He’ll do anything to get the groom out of the picture. / It takes a real man to become a maid of honor.”

Patrick Dempsey is poised to be a great leading man in movies, just not with this predictable and too often crass romantic comedy, “Made of Honor.” Dempsey plays Tom, a rich, convertible-driving playboy who treats women like recreational toys—all women except his best friend, Hannah (Michelle Monaghan), with whom he has his only meaningful relationship. The film opens with Tom and Hannah meeting in college, when he jumps into bed with her, thinking she was her roommate. The fact that Hannah has the will to resist his charms (at least initially) and insults him under the guise of “being honest” intrigues Tom, and they become friends.

The story continues 10 years later, and nothing has changed for Tom. He fills his days meeting women, playing basketball with his buddies and hanging out with Hannah. True to romantic comedy form, once Hannah travels to Scotland for six weeks, Tom realizes how empty his life is without her and plans to tell her as soon as she returns. But before he can tell her how he feels, Hannah introduces Colin McMurray (Kevin McKidd), a Scottish Prince Charming, as her fiancé. As if that weren’t enough of a blow to his ego, Hannah asks Tom to be her “Maid of Honor.”

“Made of Honor” has the framework for a solid romantic comedy and will draw comparisons to “My Best Friend’s Wedding,” but falls short in character development. Like Julia Roberts’ character in “My Best Friend’s Wedding,” Tom’s goal is to sabotage the wedding from within. The comedy of a male maid of honor rests mostly with obvious jokes about Tom being assumed gay and substituting poker night with making gift baskets.

The film missed an opportunity to provide more insight into Hannah’s character. I wondered why Hannah, an otherwise intelligent, successful and beautiful woman, would sustain friendship with a man who treats women as objects. I also wondered why Hannah, after being overlooked by Tom for 10 years, would invite him to be her “maid of honor.” Hannah says it is because they are best friends. I thought of two other possible reasons that would have been interesting plot thickeners— (1) after being the perfect friend to Tom and never considered as a romantic interest, Hannah wants to show Tom that she is indeed an eligible woman who is desired by a quality man. Or (2) after a whirlwind romance, Hannah is not sure about how deep her love for Colin really is and secretly is still hoping that Tom will step up and save her from the mess she knows she is about to get herself into. But if Tom won’t stop her, she is willing to consign herself to marrying a man she barely knows, just so she won’t be alone.

But this movie wasn’t really about Hannah’s character. Michelle Monaghan did a fine job as Hannah, but the role seemed a bit generic. The main focus was Tom. However, not giving Tom any credibility or respectability early in the film limited the emotional connection that the audience could make with his character when he tried to change for Hannah. Nevertheless, Patrick Dempsey is such a good actor that his performance brought more complexity and likeability to the character than the script called for.

Since Tom’s character is a playboy, promiscuity and sexuality are prominent themes in this movie. Most references both verbal and visual to sexual relations are outside of marriage. In one scene, Hannah models sexy lingerie for Tom. Several characters mock marriage, and few characters extol its virtues. Sexual innuendo, slang references to female genitalia and profanity were used throughout the film.

The film does bring out that a consequence of Tom’s promiscuity could keep him from a relationship with Hannah. It also has Tom suffer some embarrassment at the hands of one of his jilted lovers. The Bible points out another consequence in 1 Corinthians 6:18, that sexual sin violates the sacredness of our own bodies.

“There's more to sex than mere skin on skin. Sex is as much spiritual mystery as physical fact. As written in Scripture, ‘The two become one.’ Since we want to become spiritually one with the Master, we must not pursue the kind of sex that avoids commitment and intimacy, leaving us more lonely than ever—the kind of sex that can never ‘become one’.”

“Made of Honor” reinforces the idea that women are waiting to meet a prince who will sweep them off their feet with grand romantic gestures. Cinematography added to the romance and was often poetic, capturing Central Park’s Bow Bridge and a castle with a moonlit sky in “Scotland” (actually filmed in the UK). It also reinforces the world concept of true love determined by feelings and often a series of circumstances considered signs. The Bible describes true love in John 3:16 “for God so loved the world that He gave his only begotten Son…” and again in John 15:13…

“Greater love hath no man than this, that a man lay down his life for his friends.”

I cannot recommend “Made of Honor” due to the misuse of sexuality, sexual innuendo and profanity.

Negative
Negative—…get the word out there quickly that there is nothing honorable about this movie. We left in the first ten minutes, and I was upset that my 18 and 27-year-old daughters had to see that much. It is vulgar and cheap, and Patrick Dempsey and everyone else connected to this movie should be ashamed. It is DEFINITELY NOT a PG-13 movie, but an R.

Faith
Negative—Warning! To all you Patrick Dempsey fans, this movie is horrible. My church sisters and I decided to treat ourselves after church for Mother's Day. Boy what a waste of time, I was so uncomfortable. This movie was built solely around sex. We were with our Pastor's wife, to make it even worse. I suggested this movie because I like Patrick, but this movie offends in every way. I wish I read the first viewer's comments before we went to see it. As believers, we need to make moral decisions and stand up for no sex before marriage. What are we teaching our generation. One of the ladies was surprised that this was a PG-13 movie. It would've been such a cute story without all of the sex and language. …
My Ratings: Moral rating: Extremely Offensive / Moviemaking quality: 1½

Tracy, age 33
Negative—A painfully contrived film that falls flat over and over again. Patrick Dempsey plays a ladies’ man who suddenly realizes he is in love with his best friend, played by Michelle Monaghan—but she is now engaged to a man she just barely met. Dempsey's character becomes the wedding's “maid” of honor to try to win the girl for himself. Morally, there is much sexuality, foul language, and crude humor. Moral quality aside, it's not even a very good movie! Not recommended.
My Ratings: Moral rating: Very Offensive / Moviemaking quality: 2

Jonna, age 22
Neutral
Neutral—For a grown woman I thought this movie was good it had some funny parts and didn't show to much! Patrick Dempsey’s character learned that sleeping around with women will never fulfill him and thought this was a good lesson if teenage boys or anyone sleeping around sees this movie. However, I would never want my almost 13 yr. old daughter seeing this movie. Nor would I want my 15 yr. son to see this movie either, not yet anyway. The good thing is they show no sex, just getting out of bed scenes. Once again this movie gives the acceptance of homosexuality, but not to worry, this movie is not about this, it's just mentioned 2x.
My Ratings: Moral rating: Better than Average / Moviemaking quality: 4

Dawn, age 36
Neutral—I rated this movie as neutral and would say on a scale of 1-10 with 10 being the most offensive, this movie is about a 7. It was a mixture between bad but watchable, and offensive enough that I wanted to turn it off. There is a lot of sexual related talk and joking, including a part that has a “sales person” selling goods related to this. The movie has some entertainment value, but I don't know if its worth it to sit through the trashy parts.
My Ratings: Moral rating: Offensive / Moviemaking quality: 3½

Lindsey, age 23
Positive
Positive—I think this was an excellent movie. I didn't stop laughing throughout the whole movie. I took my cousin who is 12 and we both liked it.
My Ratings: Moral rating: Good / Moviemaking quality: 4

Beth, age 28
Positive—This movie was the best romance movie I have seen in a long time. It's very cute. Faith (the lady above me), you went way over board. It is not that bad, it is nowhere near R. I recommend this movie.
My Ratings: Moral rating: Excellent! / Moviemaking quality: 5

Stacey, age 20
Positive—…this movie shows us that even someone who is troubled at first can find love in places he never knew he could, the two characters compliment each other very well, and the purpose to watching most movies is to see the characters evolve so that a happy ending is in order.
My Ratings: Moral rating: Good / Moviemaking quality: 4