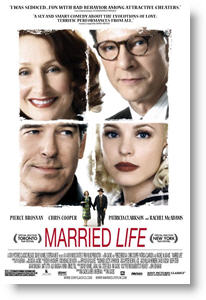 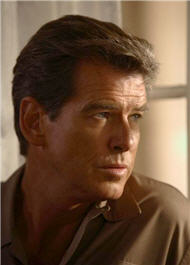 ADULTERY—What does the Bible say about adultery? Answer

LOVE—What is true love and how do you know when you have found it? Answer

MARRIAGE—Is formalized marriage becoming obsolete? Answer
Many people are convinced that traditional marriages don’t work and that this practice should be abandoned. What does the Bible say about marriage?

“Do you know what really goes on in the mind of the person with whom you sleep?”

Here’s what the distributor says about their film: “A 1940s-set drama where an adulterous man plots his wife's death instead of putting her through the humiliation of a divorce.

A wry blend of dark humor, romantic deception, and stylish melodrama-with a dash of suspense-‘Married Life’ is an unconventional fable for grown-ups about the irresistible power and utter madness of love.

After decades of marital contentment, Harry (Chris Cooper) concludes that he must kill his wife Pat (Patricia Clarkson) because he loves her too much to let her suffer when he leaves her. Harry has fallen hard for the young and lovely Kay (Rachel McAdams), but his best friend Richard (Pierce Brosnan) wants to win Kay for himself.

As Harry implements his maladroit plans for murdering his wife, the other characters are entangled with their own deceptions. Like Harry, they race towards their passions but trip over their scruples, seemingly well-intended towards all, but truthful to none.

‘Married Life’ is an uncommonly adult film that surprises and confounds expectations. While it plays with mystery, comedy, and intrigue, its ultimate concern is: ‘What is married life?’

In its sly way, ‘Married Life’ poses perceptive questions about the seasonal discontents and unforeseen joys of all long-term relationships.”

Movie Critics
…This twist on the tryst fails to engage. …

Carina Chocano, Los Angeles Times
…There is so much passion in this story that it's a wonder how damped down it is. Nobody shouts. …Pierce Brosnan is becoming a whole new actor in my eyes, after this film…

James Verniere, Boston Herald
…a period domestic drama that never quite decides if it wants to be a credible marital study, a noirish meller or a sly comedy…

Todd McCarthy, Variety
…Just when things should be boiling over, the script goes lukewarm. …

Kyle Smith, New York Post
…Brosnan continues to put impressive distance between his 007 persona and his still-underrated gifts for subtlety and shadow…