for language and a scene of violence 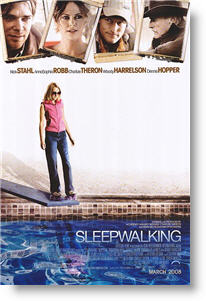 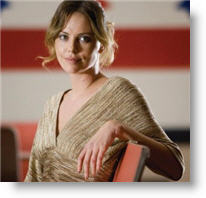 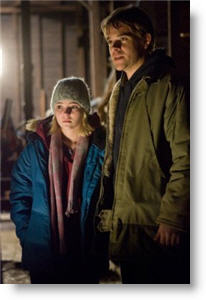 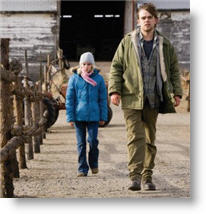 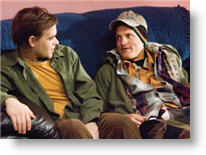 I went into the theater to screen Sleepwalkers not knowing what to expect, and came out not knowing exactly what to think. The film opens with a promising premise, that of an incompetent and uneducated mother trying to keep herself financially afloat and her young daughter secure. However, after being evicted from her home, Joleen (Charlize Theron) decides to live with her brother James (Nick Stahl) temporarily. Tara (AnnaSophia Robb) is not so quick to warm up to her uncle, but after her mother abandons her, they begin a journey of self-discovery that leads to serious changes in both of their lives.

In the area of content, this is a relatively mild R-rated movie. The most problematic scene is a murder that takes place late in the movie that will be discussed at greater length in the conclusion. However, the hardest scene to watch involves the abuse of a child. The second largest concern will be the language. There are also many f-words scattered throughout, and nearly double as many s-words. Other milder language is also prevalent, but some of it is profane. This will probably only pose a problem for some Christian viewers as many would view the language in this film as an objective telling of the type of situation in which these characters live. However, others may find that they do not feel comfortable listening to such language for any reason. Sexual content is very mild for this genre of film, as only one sexual situation is present, and in a very non-graphic fashion with absolutely no nudity. The scene is not at all an exploitative one, but rather exists to show the mother’s promiscuous lifestyle and its affect on the family.

What I personally found to be the most troubling was a scene in which Tara was smoking, and it appeared to be completely authentic. Depicted in the scene was Tara removing a cigarette from a pack, lighting it, and smoking it. If this scene did in fact depict AnnaSophia smoking, this is truly disturbing, as she is only 15. Other drug and alcohol content is present with adult characters, but they are only actually shown drinking.

Artistically, the film is a little bit frustrating. Sleepwalking has the potential to be an excellent film, only it fell short of this goal. The script is superb overall, especially during the more emotionally involving scenes. However, certain scenes feel disconnected from the film, proving to be more of a distraction than an enhancement. The ending also leaves much to be desired. Apart from this, the cinematography is very bland given the subject matter and locations. One is left feeling as if he or she has just viewed a really good student film or straight-to-video film. It isn’t terrible, but it’s not Juno either.

One area in which the film does not fall short is the acting. This is especially true of Nick Stahl’s performance. His emotional depth and characterization is very moving and gripping. Playing perfectly off Stahl is AnnaSophia Robb as Tara. She takes a very complicated character and gives her humanity, something many young actors cannot even do with basic character structures. Charlize Theron gives a solid performance as always, but her character is present only in select scenes. Dennis Hopper gives a startlingly disturbing performance, but I do not want to discuss it at any length as it will reveal major plot points.

So what does the film have to say to the audience in terms of its message? The overriding theme is one of unconditional love and devotion. Paul stated that love was the greatest attribute, even over faith and hope. James calls loving one’s neighbor as one’s self a “royal law.” 1st John tells us that “perfect love casts out fear,” a truth that we see unfold throughout the film as Tara’s uncle James shows unconditional love and devotion to her, even during times when she verbally assaults him in her bitterness.

However, the message gets a little muddled as problematic situations seem ever-present. James lies to his boss in his efforts to help his niece and, even worse, he kidnaps her. But the most problematic scene relates to the murder of a character in the name of intervention on behalf of a child. While intervention was absolutely necessary, the extreme action of intentional murder was not. The audience is never really told whether or not to find this action acceptable, but there were plenty of opportunities to make it clear.

In the end, Sleepwalking is just a little disappointing. A potentially excellent film seems to get lost in its own amateur filmmaking and lack of ethical direction, even as we desperately want to root for Tara and her ever-devoted uncle. One could do much worse than Sleepwalking, but one could also do much better.

Neutral—I saw this film myself, I researched it well in advance as a fan of AnnaSophia Robb so I knew what to expect. Right away I was disappointed by the cheap feel of the film stock itself, very bargain basement filming. The performances are indeed all great. AnnaSophia does very well playing off the emotions of others in her acting particularly with Dennis Hopper.

I researched the smoking scene, a non-tobacco cigarette was used (a real one would have been illegal for a child actress), the scene was meant for the character to explore her following a life path in her mother's footsteps and then rejecting it. They used the disposal of her roller skates to display this, I wish they could have also shown her throwing the pack of cigarettes away.

There really was a ruckus raised behind the scenes about her smoking, even chain-smoker Charlize Theron implored AnnaSophia to not take up smoking in real life, her response was that she certainly never is going to (and on a side note in a non-related interview AnnaSophia also stated she does not understand the drinking of alcohol and said that was not for her either).

But what bothers me were the swearing scenes of her character, only two incidents and placed near the beginning of the film. While they do represent a weakness of the character that is supposedly outgrown in time it still bothers me to see a 12 year old swear (While her character turned 12 in the film AnnaSophia herself turned 13 during the filming, and she is 14 now).

She is a true Christian though and has proudly stated so many times. She appears to select roles that show redemptive qualities in flawed characters, regardless of the greater overall message of the film (well she is a kid after all, one cannot expect her yet to see the “bigger picture” from an adult view). I will pray for her as she continues to seek out challenging roles that could cut close to the edge of her principles (By the way, her parents review all her script choices and actively pray with her over the final selections. They were heavily involved in the more troubling scenes of this film with their daughter as Theron has said.) A very sweet and real person AnnaSophia is, I would like to see the Christian community help our sister more in her career future, with the right guidance we could see a real winner here in her.

Overall, getting back to the film, it suffers from a lack of proper direction in that it cannot pull a positive message together despite a noble attempt. I believe a Christian director and Christian producers could have reworked it into a much better “redemption” film than non-believers, and I suppose there is a Christian message right there in that.
My Ratings: Moral rating: Average / Moviemaking quality: 2