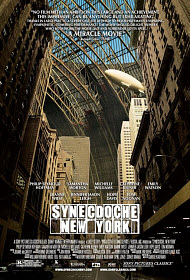 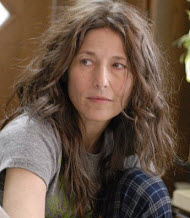 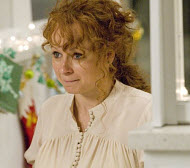 Here’s what the distributor says about their film: “Theater director Caden Cotard is mounting a new play. Fresh off of a successful theatrical run in his hometown of Schenectady, New York, Caden decides to trade in the suburban spectators and local theater for the cultured audiences and bright footlights of Broadway. Awarded a ‘Genius’ grant and determined to create a piece of brutal realism and honesty, something into which he can put his whole self, he gathers an ensemble cast into a warehouse in Manhattan’s theater district. He directs them in a celebration of the mundane, instructing each to live out their constructed lives in a small mockup of the city outside.

As the city inside the warehouse grows, Caden’s own life veers wildly off the tracks. The shadow of his ex-wife Adele, a celebrated painter who left him years ago for Germany’s art scene, sneers at him from every corner. Somewhere in Berlin, his daughter Olive is growing up under the questionable guidance of Adele’s friend, Maria. Caden is helplessly driving his marriage to actress Claire into the ground while neglecting his second daughter. Sammy Barnathan, the actor Caden hires to play himself within the play, is a bit too perfect for the part, and makes it difficult for Caden to revive his relationship with the alluringly candid box office girl, Hazel. Meanwhile, his therapist, Madeline Gravis, is better at plugging her best-seller than counseling him. And a mysterious condition begins systematically shutting down each of his autonomic functions, one by one.

As the years rapidly fold into each other, Caden buries himself deeper into his masterpiece. Populating the cast and crew with doppelgangers, he steadily blurs the line between the world of the play and that of his own deteriorating reality. As he pushes the limits of his relationships, both personally and professionally, a change in creative direction arrives in Millicent Weems, a celebrated theater actress who may offer Caden the break he needs.

By seamlessly blending together subjective points-of-view with traditional narrative structures, writer/director Charlie Kaufman has created a world of superbly unsteady footing. His richly developed cast of characters flutter between moments of warm intimacy and frightful insecurity, creating a script that brings to life all the complex and beautiful nuances of shared life and artistic creation. ‘Synecdoche, New York’ is, as its definition states: a part of the whole or the whole used for the part, the general for the specific, the specific for the general.”

Merriam-Webster’s Online Dictionary defines “synecdoche” as: “a figure of speech by which a part is put for the whole (as fifty sail for fifty ships), the whole for a part (as society for high society), the species for the genus (as cutthroat for assassin), the genus for the species (as a creature for a man), or the name of the material for the thing made (as boards for stage).”

The title to this movie is a play on Schenectady, New York, where the movie takes place.

Positive
Positive—There are no limits to what Charlie Kaufman can accomplish simply by using his imagination. This is definitely one of the most creative films that I have ever seen in my life: a brutally honest look into one man's life, and the lengths that he goes to in order to create a vision that is unique and personal.

I keep reading differing opinions of this film, and some seem to think that it is a depressathon. This couldn't be farther from the truth. While it is sad in many ways, the film ultimately is a celebration of life and the way that we choose to live it. Most importantly, it is about creation, about art, about the human condition. It is a film that demands to be seen, simply because it is so large in scale—a film that is full to the brim in ideas. Some may say that this is the film's downfall. I see it as some sort of miracle. Why settle for something less than brilliant? Seek out something that will move you, something that will challenge you. SYNECDOCHE, NEW YORK does all of that and more. The performances by the large cast are uniformly wonderful, and the writing and direction by Charlie Kaufman is spectacular. He has done a wonderful job with his directorial debut. The musical score by Jon Brion is brilliant.

See this film. Ignore the negative reviews. Give it a chance, and you just might thank yourself in the long run.
My Ratings: Moral rating: Very Offensive / Moviemaking quality: 5

Steven Adam Renkovish, age 26 (USA)
Negative
Negative—I found this movie utterly depressive. It's all death, loneliness, sickness, broken relationships, unforgiveness, frustration, sadness, confusion, broken dreams… The list goes on. The movie is well made, and some might call it honest and realistic. But I'm reminded of another film review saying “this man knows what he is doing, but he doesn't know why.” I can't see why I should recommend it to anyone.
My Ratings: Moral rating: Offensive / Moviemaking quality: 4

Kirstine, age 26 (Denmark)
Comments from young people
Neutral—I just don't think I got it. I mean, I understood the film's themes on life, but as a whole I don't think the film was the sum of its parts. That is not to say the movie is not ambitious, I have to give this film props for going farther than most movies in the department of vision. But to what point? It keeps you interested throughout but by the end it all felt like it was for nothing. With the life theme of the film and the ending, it felt depressing, like it was all for nothing, which I think was the point.

This is not a film for the uninitiated, if you walk in expecting anything by the standards of normal than you may hate this movie. Remember “Eternal Sunshine of the Spotless Mind”? Same writer, but this film makes Sunshine seem like it was played relatively straight. This film is strange to the tenth degree.

I don't know, maybe I should wait over time to truly appreciate and grasp any “genius” behind this film, like with “2001: A Space Odyssey,” Roger Ebert seems to think its fantastic. I also have to admit, it kept me interested, and it didn't leave me after it was done. I still ponder over it and its themes even a good week after having viewed it.

As for content, numerous sexual scenes, about 30 uses of the f-word among others, violence is not an issue. If you are going to see this, and I am not recommending it, simply stating my opinion seeing as I don't know myself, than I would suggest you walk in with an open mind and no expectation of “getting it” the first go around, maybe not even liking it the first time around. But as with other films, for me at least, only time will tell.
My Ratings: Moral rating: Offensive / Moviemaking quality: 3

Joshua S., age 16 (USA)
Movie Critics
…4 stars… This is a film with the richness of great fiction. …

Carina Chocano, Los Angeles Times
…To say that Charlie Kaufman’s “Synecdoche, New York” is one of the best films of the year or even one closest to my heart is such a pathetic response to its soaring ambition that I might as well pack it in right now. …

Marjorie Baumgarten, Austin Chronicle
…a brilliant, gut-wrenching plunge into the painful work of facing the decisions we make and choosing to either continue onward, or live in regret. …