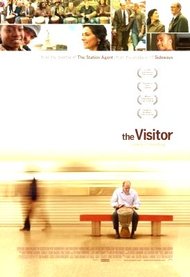 A single man or woman can help change the world. Read about some who did with faith and God's help…
Jesus Christ, Noah, Abraham, Joseph, Moses, and David

“In a world of six billion people, it only takes on to change your life.”

Professor Walter Vale (Jenkins) is an economics professor in Connecticut. He is only going through the motions in his life and teaching. He has lost his joy for life and seemingly has only one thing that seems to peak his interest: music. An avid classical listener, he is drawn to learn to play the piano, for a reason that is revealed later, but without success. Assigned to present an economic paper at a conference in New York City, Vale goes to stay at an apartment that he keeps there. Upon arriving at his place, he finds that a man and woman are living there. They have been “rented” his apartment by some scam artist.

Because the couple has nowhere else to go, he allows them to stay for a while. The man, named Tarek (Sleiman) is a bongo drum player from Syria and lives there with his girlfriend Zainab (Guirira), who is from Senegal. Though Walter spends his days at the conference, he spends his evenings with his new found roommates. He then turns his musical interests toward the bongo drum Tarek plays, so Tarek gives him lessons. For the first time in a long time (the reason is revealed later), Walter finds joy in his life in the bongo. During one trip to the city to play together, Tarek is falsely arrested for jumping the turn-style in the subway. No big deal except Tarek, as well as Guinab, are illegal aliens.

Tarek is taken to an I.C.E. (immigration) detention facility. Walter does all he can to get him out, including hiring a lawyer. During these efforts, Tarek’s mother, Mouna (Abbass) comes by the apartment looking for him. She is also an illegal alien from Syria. The balance of the movie covers how they work for weeks trying to get Tarek released. During this time, there is a little romance developing between Walter and Mouna.

During the initial confrontation in the apartment, Tarek uses the f- and mf-word and the s-word, each once. Once the Lord’s name is taken in vain in an emotional outburst. This is the only time this reviewer could find inappropriate language. Also, Tarek and Guinab are unmarried, but living together. This is demonstrated by shots of them coming out of the same apartment bedroom, but no shots (or noises) are actually revealed in the bedroom. More concerning, however, is the heavy-handed “preachiness” about the “unfairness” of US immigration policy, which begins about half-way through the movie.

This movie is superbly acted. Jenkins is always a great character actor, but he is equally joined by Sleiman, Guirira, and Abbass. The script is very well writtenl, and the movie is beautifully shot. It does tug at the heart strings, even for a black-and-white kind of guy like me. All this is for the making of a great movie, but for me, the constant grinding away of the immigration issue that consumes the latter half of the movie, becomes more beating than the bongo scenes. This is emphasized by the repeat shots of the Statue of Liberty, as if we, as a country, have lost our way in accepting the tired, poor and weary of the world. This is unfortunate, because it does taint one's lasting impression, but, overall, Director Thomas McCarthy does a great job.

The movie has a bit of an anti-authoritarian slant. The police are seen as bullies, and I.C.E. officials are portrayed as the Gestapo. The movie continually chants that the illegal aliens have “done nothing wrong,” but in reality, these authorities are only enforcing the laws of our land. Peter commands us, “Submit yourselves for the Lord's sake to every human institution, whether to a king as the one in authority, or to governors as sent by him for the punishment of evildoers and the praise of those who do right” (1 Peter 2:13-14). The movie should have directed its ire at the law makers of the country, not the enforcers of those laws, if it wanted to take on this issue rightly.

Also, as Walter has lost his joy because of a tragedy in his life, he finds that joy and purpose again in music and playing the bongo drums. As Christians, we realize that joy is only found in the Lord. As Nehemiah proclaimed during a difficult time in Israel, “the Joy of the Lord is our strength.” Nothing else in the world will fill that void as He does.

Finally, this movie has redeeming value because of how a variety of people from different backgrounds come together to help one another for what they need. While this is a much needed message in our present world, we should also realize that this is the second greatest commandment: “Love your neighbor as yourself.” But this commandment is truly dependent upon the first—to “love the Lord your God with all your heart, mind and strength.”

Overall, I would recommend this movie because of the good messages it brings and because how well it is done. I don’t think younger viewers would get much out of the movie. It is humorous and heartwarming, but often subtly so. The language is rather mild compared to many PG-13 movies, and it is all in context. There is no nudity or sexual innuendo, and the violence is very mild, with only a few short struggles. Just be aware that if you are sensitive to illegal immigration issues, the movie does have a bias.

Positive
Positive—Wow! What a very well made and interesting movie this was! I enjoyed it, it kept my interest and there was little if not anything offensive and I consider myself pretty picky
My Ratings: Moral rating: Good / Moviemaking quality: 4

Lori, age 46 (USA)
Movie Critics
…A compelling and illuminating story of four people who form an unlikely and momentary friendship of considerable depth. …

Kirk Honeycutt, The Hollywood Reporter
…Jenkins gives a poignant performance as the awkward professor who slowly lets his feelings show…

David D'Arcy, Screen International
…a terrific portrayal of a character who looks at life the way immigrants in the harbor must have first looked up at the Statue of Liberty…

John Anderson, Newsday
…a terrifically well-meaning film whose story is too tidy in its symmetries, though often redeemed by its performances. …

Steve Dollar, The New York Sun
…Don't let this one pass you by… writing is razor sharp without ever losing its compassionate center and the four central actors match his efforts all the way with flawless performances. …

Geoff Berkshire, Chicago Tribune
…often charming and compelling… If you liked the somewhat similar, if superior “Starting Out in the Evening,’ you’ll like this ‘Visitor.’