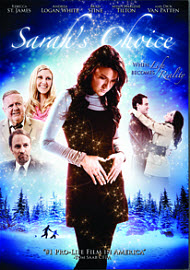 “Sarah’s Choice” is a redemptive film about an up and coming career woman who is suddenly hit by the life altering realization of her being pregnant. On the verge of getting a promotion she’s been waiting for, Sarah must decide if she will succumb to the pressure of the world to get an abortion or choose to give birth to the unborn human growing inside her. Will she choose to abort the baby in order to have worldly success in the workplace, or will she accept the call to motherhood and embrace the gift of a child into her life? From here, she is caught in the middle of this moral dilemma and the film realistically shows the viewer what a wayward child of God must go through to make a decision between life and death for her seemingly unwanted, unplanned, and burdensome child.

I was excited to view this film because of its controversial subject: abortion. Sadly, even some “Christians” claim to be “pro-choice,” while most conservative evangelicals, like me, firmly stand in opposition to the killing of an unborn child, regardless of how the woman became pregnant. If you are a non Christian who stands on the side of the “pro-choice” movement, I urge you to ask yourself, “Why should an innocent baby have to die in order to make your life seemingly easier”? Does that not sound selfish? If you are a Christian and are “pro-choice,” ask yourself, “Why should an innocent child have to pay for the sins of another?” Furthermore, for the Christian, abortion is not an option, because you were bought with the precious blood of Christ and, therefore, your body does not belong to you: it belongs to God (1 Corinthians 6:19-20).

Abortion is very controversial topic, and many people become very emotional over it. This is portrayed in the film through a friend and co-worker of Sarah’s. Sarah’s friend got pregnant in high school and was pressured into having an abortion. She has secretly carried around the guilt of murdering her unborn child for years, and she fights it by reminding herself and others that she would not be where she is today if she had the baby. I won’t spoil the ending, but this woman does find a remedy for her guilt eventually, and I found it to be encouraging.

The film is very clean, for the most part. Sarah is not married to her boyfriend, Matt, and father of the baby but there are no bedroom scenes or any reference to sexuality, although they are shown kissing each other a few times. There is no profanity or drunkenness, but Matt and his uncle are shown sitting at a bar drinking soda, not alcohol.

Theologically, I have to point out that, in the film, Sarah has dreams and visions (prophetic revelations) about her unborn child which ultimately lead to her making a decision about whether or not to abort the child. I personally do not believe that God reveals Himself to people in this way today. We have the written Word of God which reveals everything needed for us in the church today. The Bible is complete and sufficient for all spiritual and ethical matters this life can present. Nevertheless, this part of the film can lead to an edifying theological discussion. There are many resources on the matter of people’s claim to modern day divine revelation. Be discerning. Search the Scripture using careful tools to help you accurately interpret the Bible and apply it to your life today.

I do recommend this film to discerning Christians. Apart from the visions issue, the film has a very encouraging and redemptive message to all people. It shows how the world has been deceived my Satan because of our blindness to see that a child is not a burden, hindrance, or punishment. The Bible clearly says that children are a gift from God (Psalm 127:3). Parents are blessed by having children (Psalm 127:5). It is God’s sovereign will that life be fully embraced and loved by all (Jeremiah 1:5). Abortion is truly nothing short of murder. If you are a “pro-choice” advocate, I beg you to please open your heart to the Word of God and be willing to listen to what God has said on the matter. Do some research, and you’ll find that a fetus is not just a “lump of cells.” It is a human life, and he/she has the right to live. Finally, if you are one who has had an abortion in the past, there is forgiveness at the foot of the Cross, if you are willing to confess and repent (1 John 1:9).

Positive—Well, to forward this, I have lost 2 babies in miscarraige so this touched my heart. I was able to hold one of my babies who was born at just 12 weeks in pregnancy, We were even able to tell that he was a boy. So for me, I have seen that a baby in womb, early in pregnancy, is a baby, all finger all toes.

This movie is good. It is appropriate for children that have been explained what abortion is. If it has not been explained to them, you may be needing to stop and explain what is happening. We watched it as a family, the children who watched are 7 , 6 and 3. The three year old was bored but the two eldest watched eagerly to see what "Sarah’s Choice " would be.

I think that the film was sensitive to the real life fears that women with unplanned pregnancy face. It is not only those who are poor or uneducated that struggle with the choice to be made, but those who are job oriented that are afraid of how they can continue after a child is born.

One area that was kind of odd for me was the three “visions” that she had. Although very similar to Scrooge’s life altering visions, I think it was portrayed that they were from God, by a woman who was sent to her to make her see what her choice, either way would bring.

Above that though, I think that it was nice that they gave a hope of forgiveness to those who have had an abortion in the past, and a way that some have used to put that grief into action. A must see I think for those with teens especially knowing how “high school age love” usually backfires when they find out they are pregnant.

This movie is not “pushy” in the sense of rudeness toward a woman who is thinking of aborting her child. It is not bashing at all. I think that is a very big selling point. As I explained to my children, be careful who your friends are and what advise you take from them. If your friends and family’s advise can be backed up from the Bible, then you truly have a friend that is seeking God’s best interest in your life.

I would watch this movie with a woman contemplating abortion without fear of offending her with its content. I like that “Sarah” asks God for His help, showing the change from a woman forlorn to a woman with hope. Since God is the Author of HOPE. Thank you for a movie that is addressing real issues that is appropriate. -Dawn
My Ratings: Moral rating: Good / Moviemaking quality: 4½